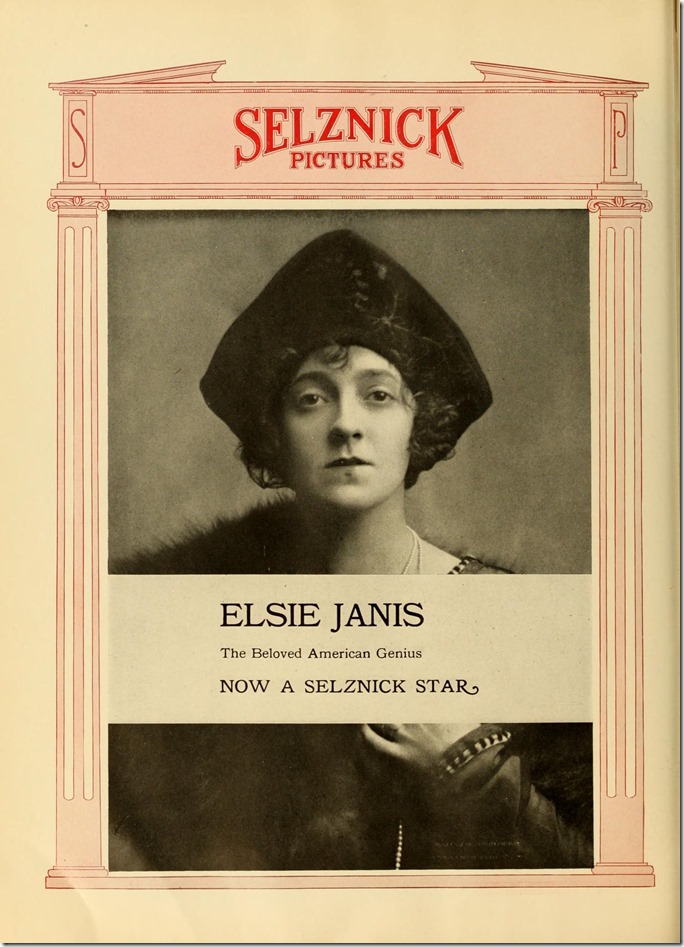 World War I, the “War to End All Wars,” concluded 100 years ago at the 11th minute of the 11th hour, November 11, 1918. A bloody conflagration involving such countries and republics as the United States, Canada, England, France, Germany, Austria-Hungary, and Russia for more than four years, it saw borders dissolved and reconfigured, terrible new lethal means of killing and maiming men created, and eventually led to World War II.

Young American men found themselves weary, repulsed, and depressed as they slogged on and on, looking for a ray of sunshine and an end to the mayhem. Vaudeville and stage star Elsie Janis, quick with a quip and song, came to their rescue, providing a measure of hope and forgetfulness. Long before Bob Hope visited troops around the world during World War II to bring moments of levity, Janis became the first major star to tour camps and hospitals entertaining the American Sammies, our soldiers.

Born 1889 in Columbus, Ohio, Janis debuted as a child actress in 1897 with impish impersonations of the famous, and comic singing. By 1906, she starred in revues and musical comedies, even headlining at the world famous Palace Theatre in New York. Janis even starred in a few films in 1915-1916.

While performing at London’s Palace Theatre in 1915, Janis spent every free moment visiting British soldiers recuperating in hospitals and camps, quickly realizing the value of a smile and lighthearted entertainment for the bone weary men. She performed again at these camps and hospitals after returning to England in 1916. When the United States joined the war effort in 1917, Janis looked to serve the troops in her own way.

Janis describes her initiation into entertaining the troops in her 1919 book “The Big Show: My Six Months with the American Expeditionary Forces,” which she dedicated to all the men she lost her heart to “over there.” The book revealed her joy in bringing a little bit of happiness to men serving at the front. She wrote about the emotional value of performing for the men in these places. “It was then I learned what a little comic story or song can mean to a man before he goes into a fight or after he has ‘got his.’”

When she was booked to perform in revues in Paris and London in 1918, Janis decided to throw herself totally into the war effort, spending most of her time playing at camps and hospitals, all on her own dime. The Boston Globe published a long feature with her on February 10, 1918, as she and her mother prepared to ship overseas for her sixth time performing for troops, this time devoting herself to American GIs. Janis described performing hundreds of times to English troops, noting they wanted something lighthearted to help them forget about the war for an hour or two. She declared, “Soldiers are the most appreciative audiences in the world.” 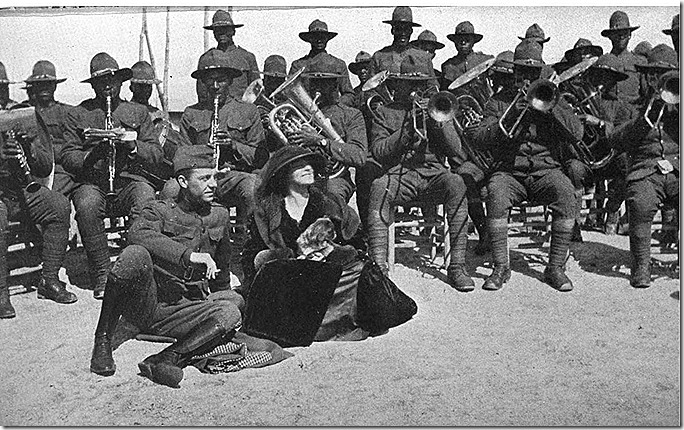 Elsie Janis wrote the World War I song “When I Take My Jazz Band to the Fatherland,” and that’s exactly what she did. She claimed in her autobiography to have helped introduce the word “jazz” to the British.

Stringers and the military relayed stories of Janis across the country from the moment she departed, performing on everything from boxing rings to stages to tables. The Lincoln Star reported March 31, 1918, that Janis was “the first American musical comedy star to come to France to help furnish amusement for the American Expeditionary Forces.”

Janis and her mother would tour YMCA camps near the front in France where American troops found a little rest and relaxation, chauffeured around the country in a Packard Twin 6 limousine with her pianist. They would sometimes visit multiple sites in a day, or stay a few days providing multiple shows at locations, even those threatened by attack. While performing at a Memorial Day show at a YMCA camp, Janis experienced bombardment during the production, with an air raid occurring after the conclusion of the revue, per Variety. Around this time, Gen. Pershing attached her to the American Expeditionary Forces, welcoming her work nursing the boys with entertainment and kindness.

While performing at the Neuilly-Aimes Hospital Janis wrote that she “felt useful to humanity for the first time in my life.” She described the heartbreaking nature of visiting hospitals, where men she had greeted often died with hours of her visit, but opened her heart wide and kept on smiling. She entertained and visited all wards, describing how the American army at the time proudly contained a mixture of immigrants: “I found every nationality and lots of them not speaking English.” The men often joined her in singing some of their favorite songs, or adding their own comic retorts.

The June 16, 1918, issue of the Los Angeles Times printed a June 15 New York Times dispatch stating that she had performed for a week entertaining American soldiers at a hospital where “surgeons welcomed her, believing the effects on the patients would be good, which proved true.” The story recounted how Janis told stories, performed funny impersonations, and sang ragtime songs, starting with the less seriously wounded and then eventually moving to infectious wards where she sang through windows. “For the time being the men forgot their pain, chuckling and many joined the chorus.”

Realizing the value and importance of lifting the men up, Janis asked other American performers to join her, but few heeded her call. Pershing praised her, asking her to keep up the good work inspiring the men. A YMCA advertisement in entertainment journals quoted praise from an unidentified general thanking her. “You have kept my men from thinking of tomorrow’s battle; they will fight better because of tonight.”

Journalist and playwright Alexander Woolcott helped spread the word of Janis’ outstanding service in a dispatch to the New York Times, shared over the wire and printed in many newspapers in late summer 1918. Calling her “The Playgirl of the Western World,” Woolcott described her first appearance at an Army camp, riding in on a cowcatcher surrounded by troops, jumping off the train to the stage, wearing a black velvet tam. Lifting her hands she yelled, “Are we downhearted?” with the men responding with a thunderous no.

“For like the rare officer who can inspire his men to very prodigies of valor, so the flashing Elsie is compact of that priceless thing which for lack of a less pedantic phrase we must call positive magnetism.” Appearing refreshed, reinvigorated, and proud after giving her all, Janis “cheered them on their way.” Woolcott believed that books should be devoted to writing about her glorious work after the war. Describing her “barnstorming with a vengeance,” a nomad performing with only one costume, staying in “some bad hotels, performing in mess halls, beaches, and through windows of infected wards. In all her years on the stage she has known no such tumultuous or thundering welcomes.”

On August 10, the Atlantic News Telegraph repeated a Stars and Stripes story. “To an army which has these many months listened perforce to lectures to an army that has been overwhelmingly informed and edified, Elsie Janis is a distinct relief. She is an oasis of color and vivacity in a dreary desert of frock coated and white tied lecturers.”

The men loved Janis for her generous, caring nature, quick wit, and willingness to take risks to support them, honoring her by naming some of their giant artillery guns after her. Gunners shelling Metz, France named one of their major cannons “Elsie Janis” in her honor to join “Hinky Dink” and “Woodrow Wilson” in bombarding the Boche. In another area, troops employed their guns named “Betsy Ross” and “Elsie Janis” to lob shells.

Janis’ dedicated work for months inspired many across the country, thankful for the inspiration and friendship she showed their troops. Variety wrote in February 1919, “As far as show business is concerned, she is the outstanding heroine…she came at the right time, and did the right thing. She cannot be praised too highly for what she has done. Her fame and name are as well known with the boys as General Pershing’s.”

The June 4 New York Clipper claimed that Janis had performed 610 times for American soldiers within range of enemy guns. She was the only woman to earn a “white pass” from the British government allowing unfettered access to battle areas.

Troops who worshipped her honored her upon her return. The United States 94th Aero Squadron promoted her from honorary captain to lieutenant general. Others presented her with medals and commendations.

Janis appeared in two films for Myron Selznick’s Selnick Pictures upon her return from the war. Her second film, “A Regular Girl” featured a Frances Marion and Edmund Goulding story of a young society woman who changes her name to go overseas and serve as a nurse to doughboys before returning to American society. Janis then returned to the stage, occasionally writing stories or scripts for such films as “Oh, Kay!,” “Madam Satan,” and “Reaching for the Moon” and producing the 1930 revue film “Paramount on Parade.”

Though Bob Hope receives all the glory for providing lighthearted entertainment to troops, virtually forgotten stage performer Elsie Janis inaugurated the practice decades earlier, performing as a sense of duty and love to American troops.