Throughout its history, the city of Hollywood has seen much come and go in the name of “progress.” Instead of remodeling and reusing a historic structure, as is done in Europe or the East Coast, most builders simply tear down the old to make way for the “hip” and “modern.” Occasionally, acts of vandalism destroy grand old buildings. At some locations, however, both unfortunate actions occur.

Just over five years ago, the Little Country of Church of Hollywood, located at 1750 Argyle Ave., burned down through malicious arson. This quaint structure, resembling a church found in any little farming village, bridged old and new Hollywood, thanks to its location, the site of the A. G. Bartlett estate, one of Hollywood’s early great mansions. Both unique and beautiful in their own ways, the buildings acted as community gathering places and landmarks for Hollywood residents.

In April 1901, sheet music publisher A. G. Bartlett purchased five acres at the northeast corner of Prospect Avenue and Vine Street, on which to build an $18,000 estate. The two-story, 12-room mansion, called “Vista del Mar” after the tract of land on which it was located, was designed in the mission style with clay tile roof.

Gardens were lavish as well, with exotic flowers, shrubs and trees from around the world decorating the grounds, which served as a government experimental station. Valued at $100,000, the collection included many rare species and varieties that grew only on the property. Tourists flocked to see the elegant gardens and admire the house. 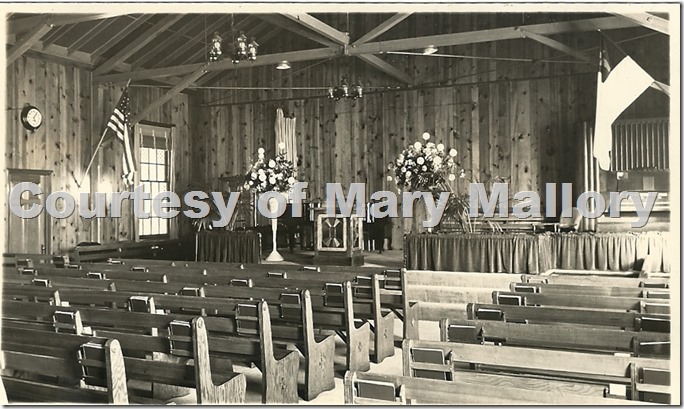 After Bartlett’s death in 1923, the family sold the property to a 25-member syndicate for $1.35 million, the highest price ever paid for a subdivision in Los Angeles. The syndicate, which included actor Antonio Moreno, planned on dividing the property into business sites along the 382-foot frontage on Hollywood Boulevard. At the same time, the company paid the city for Argyle Avenue to be extended through the property from Hollywood Boulevard.

Along with paying for street construction, they made other agreements. “Provision is made in the map for six sites for a height limit to business buildings to front on Hollywood Blvd.” These buildings – Taft Building, Guaranty Building, Plaza Hotel, B. H. Dyas Department Store, among them – would all be built in harmony with surrounding properties.

The syndicate intended a grand hotel resembling that of the Biltmore to be constructed on the home and garden’s two-acre site. Business declined as the decade wore on, and after the stock market crash, dreams of a hotel died. The home was soon torn down.

Methodist minister William Bennett Hogg and his wife arrived in 1933 from Tennessee via Texas, drawn here to preach the word of God. A college graduate, Hogg served as minister for a few years before serving in World War I as a chaplain. The brutality of war and burying so many of his comrades caused him to have a nervous breakdown.

Once back in the states, Hogg became a circuit preacher, traveling by horse and buggy between several churches in a rural area. While he found that many of his congregants took the Bible literally, they also practiced their faith seven days a week. Hogg dropped his more sophisticated ways to take on the persona of Josiah Hopkins, growing in popularity.

Hogg acquired the former Bartlett estate property in early 1934 with donations raised by radio listeners with plans to reproduce a country village consisting of church, corn mill, creek and spring. Plans moved quickly, with groundbreaking occurring Feb. 18, 1934, for construction of the little church designed by architect Paul Kingsbury. On March 4, 1934, Hogg and his followers consecrated the site, with 3,000 persons watching the laying of the cornerstone. Hogg declared that, “The Little Country Church is dedicated to the pioneer mothers of California.”

They planned on offering old-time religion to sophisticated city folk looking for direction and hope. According to the Los Angeles Times, “Dr. and Mrs. Hogg believed that most churched and unchurched folk were hungry for a simple faith. The Country Church was built as a simple country meeting house to remind people of some little church they had known earlier.”

Volunteers built the 250-seat chapel almost entirely from donated goods. Recycled stone from Los Angeles’ old City Hall sidewalk became terracing and steps. Mrs. Bullock, widow of the founder of Bullock’s department store, gave the church two sets of bells chosen from the collection of the Mission Inn at Riverside; one, a replica of an ancient Venetian bell, and the other, a main bell from a sailing ship.

At the April 15, 1934, dedication, attended by such people as songwriter Carrie Jacobs Bond and actor Lionel Barrymore, a message was read from President Franklin Roosevelt, followed by simple singing and speeches. The Country Church quickly opened its doors beyond its regular services, offering weddings, talks and musical performances.

Unlike most churches, however, the Country Church also served as a broadcasting station for Hogg’s Goose Creek show, as microphones, loudspeakers and a control room were installed during construction. Hogg continued on KFAC until Sept. 30, 1934, when Columbia Broadcasting began carrying a Sunday afternoon broadcast of services.

Hogg’s show exploded in popularity, with some comparing Hogg’s homilies to Will Roger’s stories. Daily Variety reported March 18, 1936, “Racked up by smart production and pointed for matronly reception, this one-time Columbia sustaining show has the makings of a new favorite.” On Aug. 30, 1936, Hogg’s show began broadcasting Monday and Thursday evenings at 7:45 PM on CBS, crusading for “back-to-the-simple-life.”

Later that fall, Hogg underwent prostate surgery, and his health began failing. He died on Jan. 15, 1937, with services on Jan. 18, 1937, followed by burial at Forest Lawn. Five ministers participated in his service, with members of Hollywood’s American Legion Post 93 serving as guards of honor. Two thousand people attended Hogg’s memorial service on June 6, 1937, with 12 rosebushes planted around the flagpole of the Argyle property, and Army and Navy veterans sowing poppy seeds from Flanders around the site.

Virginia Hopkins carried on, continuing interdenominational services with ministers of other churches officiating. She also persevered with the radio program as it became a country gospel radio show, ending with her death in 1966.

In 1992, the city of Los Angeles named the Little Country Church Historic-Cultural Monument No. 567.

Martha Hogg, aka “Peachy Applewhite,” the first church secretary and organist, continued on in that role until she and her sister were forced to close the Country Church April 27, 1997, due to dwindling membership.

Susan Moore of Hollywood Hills Coffee Shop planned a 200-seat bar and restaurant on the grounds of the church in 1999, but such a business horrified the Hogg sisters, leading another business to purchase the property.

The Little Country Church sat virtually empty until Christmas Day 2007, when it mysteriously burned down. Today, the property sits vacant, surrounded by remains of the two gardens. Even with destruction, the empty site evokes echoes of simpler days.