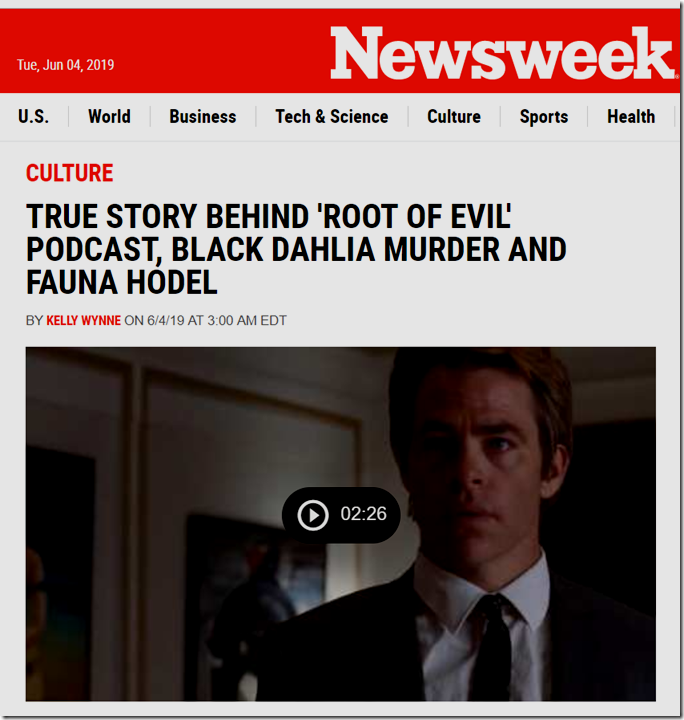 About 1980, when I was in journalism school, one of my classes heard guest speaker Martin Kasindorf, who impressed the room of aspiring reporters with his tales of being a Newsweek correspondent. (He was later the magazine’s New York bureau chief, worked at Newsday and was White House correspondent for USA Today before retiring in 2007.)

From Kasindorf in 1980, it has been a long, hard fall to 2019 and Kelly Wynne, who graduated from The New School last year and currently writes about culture for Newsweek.

I typically ignore Newsweek. But then it attempted to write something about the Black Dahlia case. Oh dear.

I could spend an ocean of time on Wynne’s Black Dahlia article. It’s loaded with mistakes and examples of bad writing.

Consider the lede. Do you think a piece that begins this badly is going to get any better?

I could pick on Wynne – she’s young, inexperienced and an easy target. But the real culprit is Newsweek. What’s most evident from this piece is that nobody – absolutely no one — edited it except for a Web producer to throw in some art because good art means more clicks. The item went on the Web as raw copy or, as we used to say on the copy desk, “untouched by human thought.”

Let’s catalog a few of the more terrible errors, in case I can keep them from spreading:

Dr. George Hodel, Hollywood gynecologist, is from the “I Am the Night” press kit and reporters should not rely on press kits to be truthful. That other writers get material from the press kit is no excuse.

Here is where a copy editor hits the despair button. There are lots of things are wrong with this paragraph, from the elementary errors (it was a wire recording, not tape) to the staggering blunders: George Hodel’s secretary, Ruth Spaulding, committed suicide in 1945 while George Hodel’s home was bugged in 1950. A writer – or an editor — could verify this in all of three minutes by Google (it’s all online), but apparently three minutes is too much for Newsweek to spend on this gem.

Which brings us to:

Let’s just slap the Black Dahlia’s name in there somewhere!

OK, so nobody read this opus before it went online. It would take less than a minute to fix something this clumsy. Apparently that’s one minute Newsweek was not willing to devote to its content.

How can a body be “mauled” but also skillfully dissected?

Did anyone at Newsweek bother to check whether Elizabeth Short’s body was missing? Because she’s buried up in Oakland – not in George Hodel’s basement.

Wynne is young and may improve. I’m not so sure about Newsweek. It’s unfortunate to see a once-respected magazine become nothing but poorly written click bait. But here we are.

3 Responses to Black Dahlia: Newsweek Mangles the George Hodel Story Beyond All Recognition