In the early 1920s, Universal purchased many popular novels and short stories for adaptation into motion pictures. Many of these were hugely popular and possessed giant name recognition with filmgoing audiences, while also focusing their stories on intimate human relationships, cheaper and more economical to produce.

The studio turned to the intimate family drama “The Home-Maker” in 1925, based on Dorothy Canfield Fisher’s widely successful novel of the same name, ahead of its time in gender depictions and expectations. Canfield Fisher, one of the most popular and acclaimed writers of the day, was a well-known advocate for adult education, racial equality, and women’s rights, and one of the people Eleanor Roosevelt most admired. 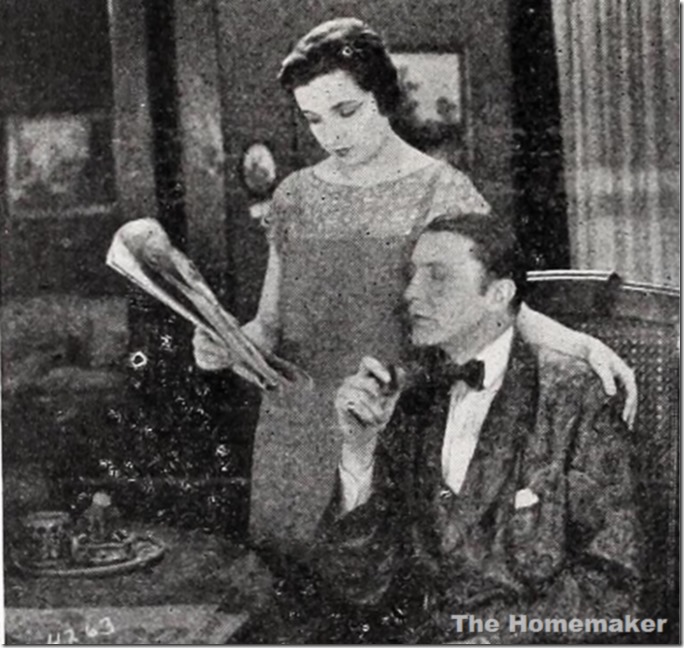 The daughter of James Holmes Canfield, a National Education Association president, chancellor of the University of Nebraska, president of Ohio State University, and librarian at Columbia University, Canfield was intelligent and successful in her own right. Speaker of five languages, she graduated from Ohio State University in 1899 before attending the University of Paris and earning a doctorate at Columbia in 1904. Though both of her parents were well educated, “Writers of Conviction” described them as unable to communicate with each other and to make each other happy. The writer herself identified with her father because she possessed a quick brain and imagination, eschewing girlish things while loving books.

Canfield married John Fisher in 1907 and gave birth to two children, before introducing the Montessori Method of learning to the United States in 1911. During World War I, she and her husband worked in France assisting with relief and refugees.

She would go on to write 22 novels and 18 works of nonfiction throughout her career, including “The Home-Maker” as well as serve on the Board of the Book-of-the-Month Club for more than 25 years. Her books were popular points of discussion among women’s groups, particularly “The Home-Maker.” 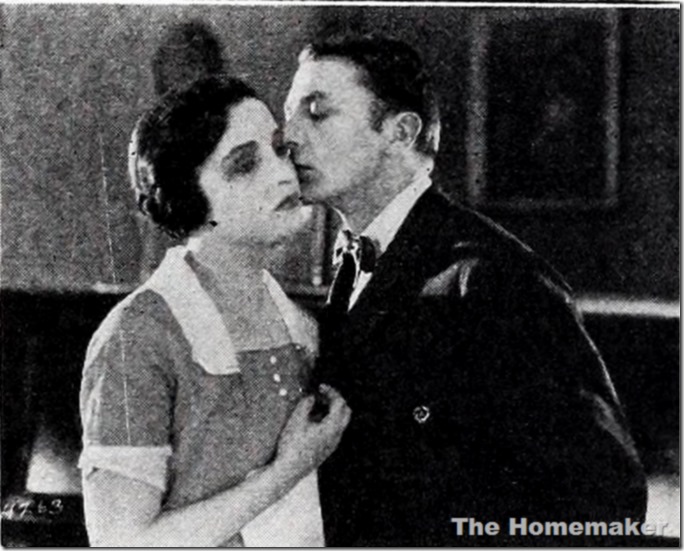 The book tells the story of Lester and Evangeline Knapp and their small family. Dedicated to keeping her home immaculate and organized, Evangeline runs a tight ship, with the family on edge and she exasperated whenever anything is out of place. Lester, a dreamer and plodder, drifts through his job as a bookkeeper at a business, but keeps his family entertained with stories. Both feel depressed and out of place.

After being fired from his job, Lester attempts suicide but finds himself having to use a wheelchair. Needing work to support the family, Evangeline takes his place at the business, and dedicates herself to improvement and customer service, something she learned working in her father’s store as a child. She quickly moves up the ladder as a successful manager, while Lester brings contentment to the household, keeping the kids entertained and the home successfully running. As he begins to regain feeling in his legs, both dread the possibility of returning to their old roles. Is it possible to remain in their current roles, or must they conform to gender stereotypes?

Many reviewers considered Canfield’s book one of the best written in 1924, and one engendering an important topic of discussion. The Washington, D.C., Evening Star in its September 7, 1924, book review described the purpose of the book “is to lend a hand in smashing het another of the traditions that have grown up around the generally accepted ‘duties of women’ and ‘rights of men,’ each supposedly inherent and inalienable.”

Canfield herself wrote for the “American Club Women” that the book was written “out of a deep personal conviction of the vital importance of home making, and out of a great desire to know how much Americans value the proper rearing of their children.” 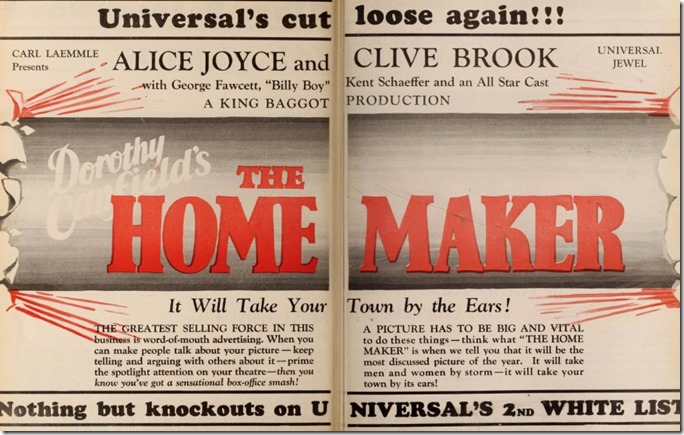 Universal assigned veteran director King Baggot to the production. Recently retired as a longtime actor on the American screen, the director had spent virtually his entire career working for Universal or its subsidiaries.The first man to receive credit for starring in an American made film, King Baggot was a jack-of-all-trades: actor, screenwriter, and director, who appeared in more than 360 films and directed 45.

Born November 7, 1879, in St. Louis, Mo.,  Baggot appeared onstage from before deciding to take the plunge into filmmaking, joining his friend Harry Solter at the IMP Production Company in 1909. Quickly becoming one of their leading men thanks to his impressive appearance and attitude, Baggot began writing some of the scripts in which he performed by 1915 and later took to directing as a way to retain more control over production and to express his full creative talents.

Universal signed Baggot to a directing contract in 1923, giving him the opportunity to direct some of his best work. Over the next few years he directed sweet Baby Peggy, now Diana Sera Cary, in the melodrama “The Darling of New York,” House Peters in “Raffles” and William Haines in “The Gaiety Girl.” He freelanced as well, helming one of William S. Hart’s best features, “Tumbleweeds,” in 1925.

The wily Baggot recognized that the power of the story in “The Home-Maker” and the vulnerability of the characters would attract audience sympathy, all without overdoing it with elaborate action or special effects. He told Universal Weekly in 1925, “I wanted to get away from the typical movie ending and this is what we have done.”

The author herself was pleased with how the studio adapted her work. Canfield wrote Alfred Harcourt September 28, 1925, “It couldn’t have been more faithfully followed, it seems to me, and even the moral atmosphere of the book as reproduced, as well as the facts.” She wondered if it would lose money, as it was made by the studio “as a sort of ‘call’ to the outcry against bad movies by churches, women’s clubs, parent-teachers’ associations, etc., just to see whether there was anything in the demand which such righteous people make in the name of the public.” 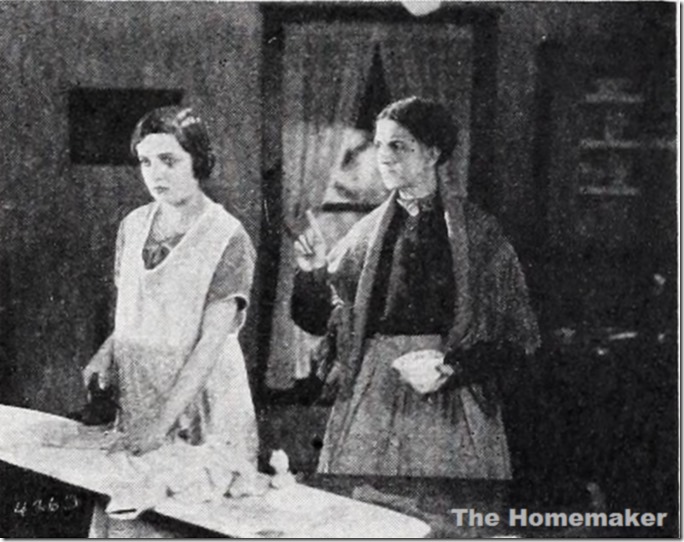 Film reviews were generally very good, praising the acting and directing, describing the film as dealing realistically with domestic issues which would engender great discussion. They praised Baggot’s work while at the same time calling him “a matinee idol of yesterday.” Moving Picture World described it as a prestige picture and the Evening World called it “Just a human story of the home and children but it is one of the most gripping things seen on Broadway screens in weeks.” The New York News crowed, “You may argue with “The Home Maker.” You may break down and have an honest-to-goodness weep. But you’ll love every bit of it.”

Others fell back on the usual stereotypes in their reviews. The August 31, 1925, Evening Star review found it giving an upside-down review of married life “which shows the husband and wife unable to fill their appointed places and the home a complete failure until fate reverses their positions, making the wife the breadwinner and the husband the home maker. Somehow, although we know these conditions exist in isolated cases, we do not enjoy having it brought before us when we are seeking recreation.”

The actors enjoyed their roles, revealing how lucky they felt themselves to earn such meaty parts, with Clive Brook telling the October 4, 1925, Los Angeles Times “Lester is one of the most human and sympathetic characters I have ever had the fortune to play.”

Director Baggot received praise for his work, with several noting it followed the other fine films he had directed that year. The New York Morning Telegraph called his directing an achievement, making the characters so realistic audiences would swear they were their neighbors. After 1928, Baggot would direct no more films, and mostly act in small roles.

While not available on DVD or streaming, “The Home-Maker” will screening Sunday afternoon, May 5 at the San Francisco Silent Film Festival, giving contemporary audiences an opportunity to experience its power.