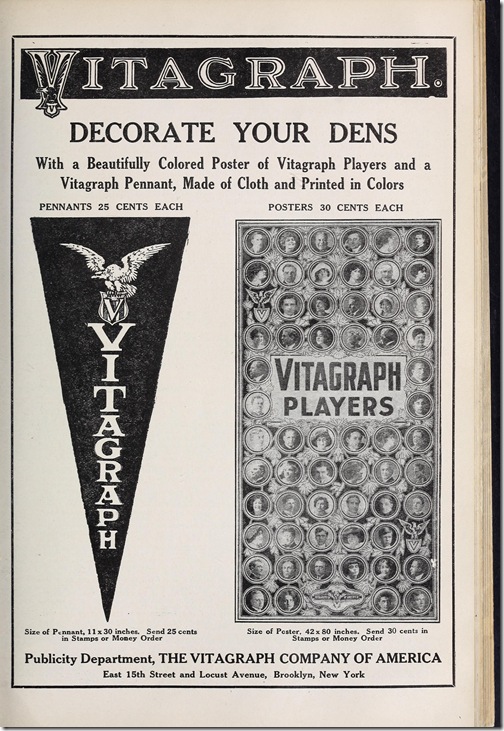 Hollywood has always been creative in promoting its films and personalities to the public. Employing posters, lobby cards, window cards and photographs, silent film production companies hyped upcoming films. With the success of these forms of advertisements and publicity, companies began selling or giving away photographs, buttons, pillow tops, plates and pennants featuring likenesses of popular moving picture stars as souvenirs and collectibles to eager fans.

The film industry was usually not the first to conceive of ideas; instead, it built on successful practices and gimmicks of other fields. One such popular practice the silent film industry quickly copied was the manufacture and distribution of small felt pennants promoting either producing companies or the film stars of such organizations.

Pennants arose as a form of identification and signaling aboard sailing ships around 600 years ago, a small, tapered flag whose color helped identify the owner or captain of a ship. The word itself arose in the 1600s, per the Merriam-Webster Dictionary.

The sport of baseball was one of the first to promote the simple pennant as an emblem of commendation and support. Winners of the National Baseball League won their division’s pennant each year, with the National League awarding pennants back to 1876. Fans took up the little flags to support their teams, as they were cheap and easy to put together. Their popularity quickly spread to colleges and universities, both for the schools in general as well as for their teams.

A 1910 story in the Los Angeles Times noted that felt pennants were a nice gift for college boys and girls, since they were very simple to make. A piece of felt would be cut in the shape of a flag, with lettering applied either by paint, embroidery, or by cutting out letters from different colors of felt, gluing them to the pennants, and then machine stitching the edges.

Car rallies, social organizations, parades, churches, cities, states and special events quickly began employing pennants as souvenirs to support themselves and allow fans and supporters to cheer on the cause.

Vitagraph appears to be the first studio to sell pennants promoting itself, buying ads in 1913 issues of Motion Picture Story Magazine offering 11- by 30-inch felt pennants at 25 cents each.

American Film Manufacturing Co., the Flying A, bought ads and released stories to Moving Picture World, Motography, and Motion Picture News as early as Jan. 24, 1914, stating that they had “…issued a very attractive felt pennant with the “Flying A” and the name “American.” These pennants are made up in red, white, and blue, with the trade-mark and name sewed thereon, making a very attractive souvenir. These can be secured direct from the Chicago office of the American or from the Mutual offices.” In August, they also sold Beauty pennants for Beauty Films and the motion picture “Sweet Land of Liberty” starring Marguerita Fischer for $1 each.

Vitagraph followed suit later in the year, offering an 11-inch felt pennant with the company’s name on the side.

The Aug. 25, 1915, Moving Picture World noted the popularity of pennants in a story titled “Pennant Craze Strikes City,” describing the popularity of pennants at San Francisco’s World Exposition that year. Demand for all types of pennants was huge, and exhibitors quickly stepped forward to give film pennants away on certain days. “To meet this demand Davis Brothers have just brought out an interesting Charlie Chaplin felt pennant, six by three inches in size, with a picture of this screen favorite on one side. The convenient size of this pennant enables it to be worn on the lapel of a coat and it is offered at a price sufficiently low to permit of its being given out in quantities.”

Early in 1916, Film Fun magazine published an ad announcing that a set of 24 pennants would be given away with one year’s subscription costing $1 to the magazine. Readers could also subscribe for only three months at 25 cents and earn five pennants.

Manufacturers jumped in on the craze as well, buying advertisements in the back of fan magazines, listing the names and faces of various stars affixed to pennants, which readers could purchase by money order. Fans could even purchase autographed pillow tops featuring photographs of their favorite stars.

Pennant collecting reached its height in 1917, with several companies listing pennants for sale in magazines, but by 1920, the craze was over.