An Early Christmas for Children With Terminal Illnesses 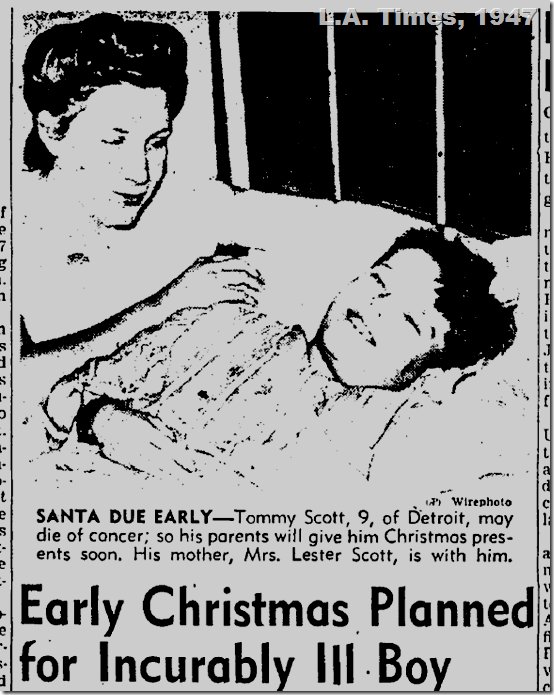 One of the tragic staples in The Times is stories of young cancer patients who received their presents early because they weren’t expected to live until Christmas.

In the 1940s and ’50s, The Times published half a dozen such features, some local, others from the wire services, about parents bravely cutting down Christmas trees and wrapping presents in October or early December for youngsters, sometimes as young as 2, or as old as 9, who didn’t know they were dying—although they usually knew something was wrong.

There was 2-year-old Vernie Smith of Woodward, Okla., whose parents gave him a wind-up jeep in early December 1951 because he would soon lose his remaining eye in cancer surgery.

Tommy Scott, 10, of Detroit received his Christmas presents in October 1947 because he had incurable cancer, and on Dec. 12, 1947, 4-year-old Michael Stephens of Seattle was treated to a party. His father, Donald, read to him from one his new books, a story titled “Mickey Mouse Never Fails.”

For Christmas 1954, the White family of Montebello spared no expense despite their meager income as 10-year-old Robert Preston White Jr. was dying of liver cancer.

“We tried to go all out this time,” his mother, Inez, said. “We haven’t been able to before. Bobbie’s been sick since he was just out of kindergarten. We’ve had doctor bills and Bobbie’s daddy has been laid off. But this Christmas we’ve tried. We’ve really tried.”

Bobbie got toy trucks, a toy rifle, Tinker toys and a Peter Pan doll almost as big as he was.

“I had Bobbie baptized a month ago,” his mother said. “I’m so glad now.” His father said: “I think Bobbie knows. We haven’t told him. But I think he knows.”

Robert Preston White Jr. died Jan. 4, 1955, shortly after becoming a Boy Scout in a ceremony in the hospital corridor. The Scouts waived their age requirement of 11 so he could join.

Despite the doctors’ predictions, Tommy Scott of Detroit lived to see Christmas. Between trips to the hospital he seemed like any other youngster. Then in July 1948, he went back into the hospital for the last time. There was no more his joking or fooling around.

His last words were: “Take me home, mommy.”

I am retired from the Los Angeles Times
View all posts by lmharnisch →
This entry was posted in 1947, Medicine and tagged 1947, cancer, medicine. Bookmark the permalink.

1 Response to An Early Christmas for Children With Terminal Illnesses