December 1947: ‘Half of Police Work Caused by Drunks!’ 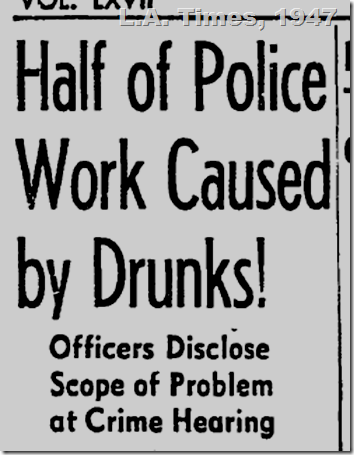 Quote of the day: “The atomic bomb was characterized yesterday as ‘the greatest blessing ever to befall the Japanese.’ ”
Col. Herbert L. Herberts, making the point that only after the Japanese surrender did the country get American occupation and a Bill of Rights.

I am retired from the Los Angeles Times
View all posts by lmharnisch →
This entry was posted in 1947, LAPD and tagged 1947, lapd, substance abuse. Bookmark the permalink.

1 Response to December 1947: ‘Half of Police Work Caused by Drunks!’