December 1947: Youths, Bored With Hunting Squirrels, Shot at Each Other – Then One of Them Died

Posted on December 4, 2018 by lmharnisch 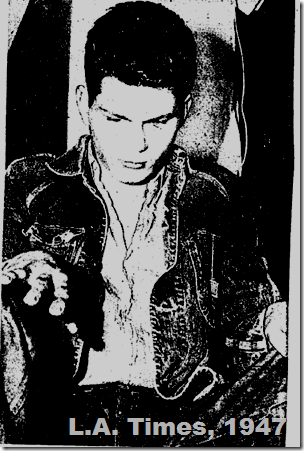 Note: This is an encore post from 2005 and original appeared on the 1947project.

Facing a possible accusation of involuntary manslaughter, Jack L. Modisett, 17, of 1717 N. Avenue 53, was removed to Ventura on an open charge yesterday after a coroner’s jury inquest into the death of Julius Lubowitzky, 22, of 2423 Malabar St., the victim of a mock war..

Lubowitzky died at the White Memorial Hospital here on Nov. 30 from a gunshot wound received earlier that day when he and Modisett, companions on a hunting trip, sought to see how close they could fire at each other without scoring hits.

Harold E. Stone, 18, of 928 El Paso Drive, a third member of the hunting party, was the chief witness. He related that Lubowitzky and Modisett began shooting at each other when they tired of hunting squirrels and rabbits. In the midst of the mimic fight, Lubowitzky fell, wounded.

Modisett did not testify. His father, Clarence, and mother, Evelyn, who were present at the inquest, are deaf-mutes. Lubowitzky’s father, Meyer, on the verge of a collapse, established his son’s identity. The Stone youth was released after the inquest.

Legal troubles weren’t over for Jack Modisett. In 1950, he was charged with beating an off-duty police officer who was trying to arrest at drunk in a Highland Park cafe.

Quote of the day: “I still believe the man wears the pants in the family and what I say goes for the whole family.”
Humphrey Bogart, when asked if his denial of being a Communist included the views of his wife, Lauren Bacall.