Posted on December 3, 2018 by lmharnisch 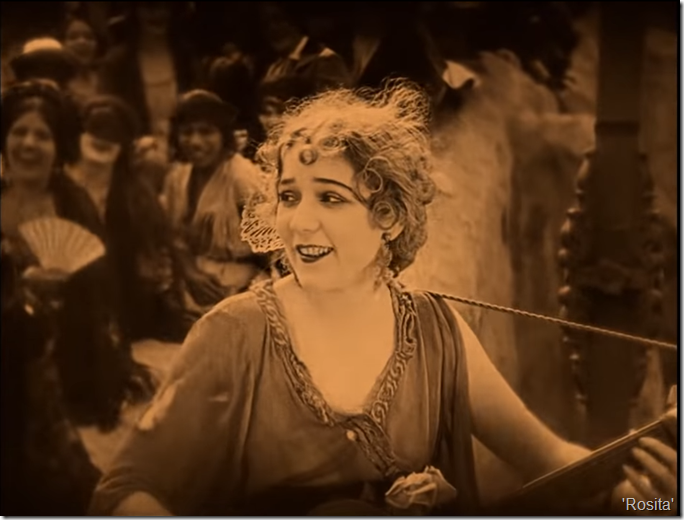 Above, a clip of “Restoring a Lost Silent Film: How to See “Rosita” by Dave Kehr from the Museum of Modern Art.

In 1922, legendary German film director Ernst Lubitsch and “America’s Sweetheart” Mary Pickford searched for new challenges in developing their careers. Lubitsch yearned to conquer America, the world’s leader in film production, proving he could create successful and moving pictures on both sides of the Atlantic. Pickford hungered to break free from the sweet young girl roles she successfully portrayed and play real women full of meat, passion, and power. “Rosita,” the story of a peasant gypsy singer who pines for a nobleman but instead gains the obsessed attentions of the lecherous king, brought them together.

The Egyptian Theatre is presenting “Rosita” on Friday with a 30-piece orchestra conducted by composer Gillian Anderson, who has orchestrated the original score composed for the production. Tickets are $20 and $25 in advance, $30 at the door. 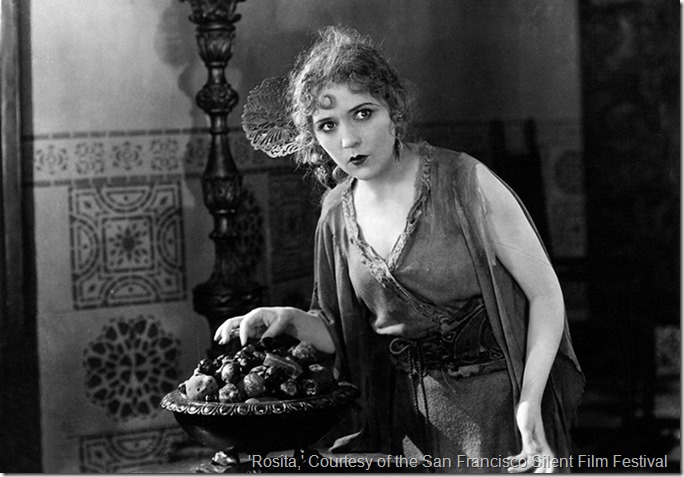 Perhaps Pickford’s husband, Douglas Fairbanks, astute to motion picture industry trends and practices, informed his wife about Lubitsch and his stellar directing reputation, one offering new artistic possibilities to her. In October 1922, Pickford brought the director over to this country to direct her in a film, soon announcing that they would make “Faust.” Pickford would play not only a grownup character but one totally against type, with Lubitsch also suggesting impish Fairbanks as the devil. Pickford decided to postpone the film, and the two compromised by agreeing to shoot “Rosita,” based on the novel “Don Cesar de Bazan” by Adolphe Philippe Dennery and Philippe Francois Pinel.

The story focused on a poor Spanish peasant girl, singing for her supper, who loves an impoverished nobleman called Don Diego. Arrested for singing a tune lampooning the king, Don Diego attempts to rescue her, but the lustful king falls for Rosita and demands that Diego be shot. While the king attempts to bribe her with gifts, Rosita loves only Don Diego. Can Rosita save her love without marrying the king? 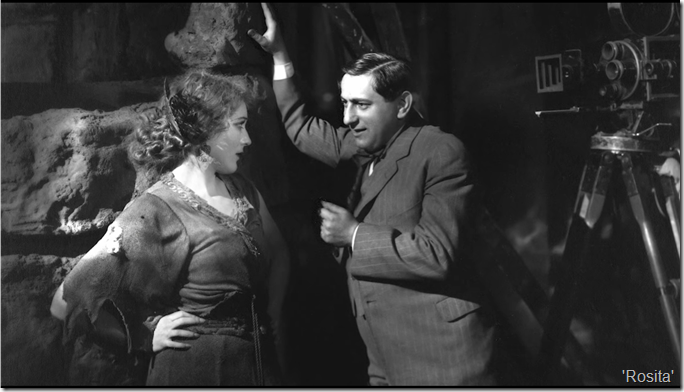 For the first time, Pickford agreed to follow direction rather than impose her vision on a director, unusual for a woman who dominated all aspects of production on her films. This was important, as Lubitsch maintained artistic and production control of his European films, and freedom would allow him to inject freshness into Pickford’s on-camera persona.

Pickford saw the film as a potential watershed moment in her career, with the opportunity to expand her range if the public allowed it. She told the February 18, 1923, Los Angeles Times, “I’m not an actress, I’m just a personality – a sort of an institution. That’s all the public will let me be.” The actress called Lubitsch “an artist without peer,” and stated she freely was putting herself in his hands, hoping for an artistic breakthrough. 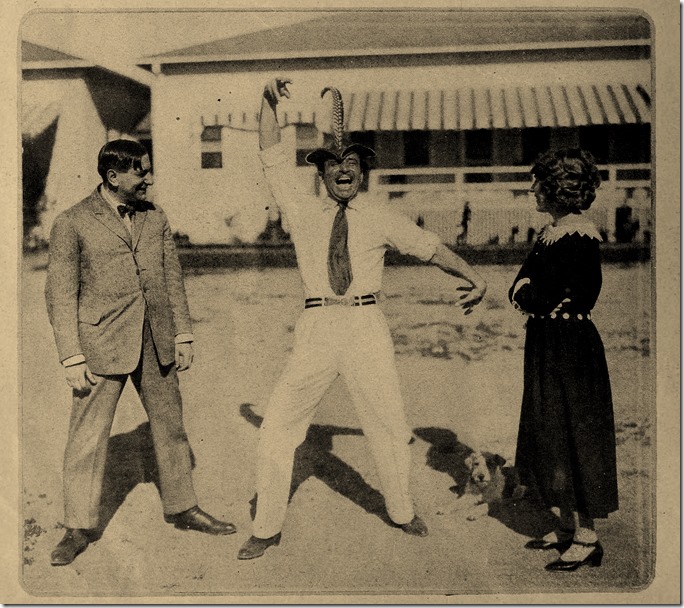 Production on “Rosita” began March 5, 1923. The trade Camera reported on March 17, 1923, that United Artists was negotiating with Maurice Chevalier, “the musical comedy rage of Paris,” as the romantic lead, which unfortunately fell apart. The magazine also reported that Pickford hoped that the film “will make a distant phase in her transition to the dramatic pinnacle to which she aspires.” For the first time, she dreamed of escaping little girl roles and playing complicated, passionate women in her first major costume drama.

Superstar Pickford also stated that “while the new story will be strongly dramatic, it will be sprinkled with natural spontaneous comedy, but with none of the made-to-order kind, created, to use studio vernacular, through the medium of ‘business.’ I intend to make this picture ‘handwork,’ not a factory-product…”

All involved took a hands-on approach to producing the film. Discussions ensued over casting, costume and production design, and script development, with Edward Knoblock adapting the story to the screen. The crew itself was a mini United Nations; Lubitsch hailed from Germany, Pickford from Canada and America, and production designer Sven Gade came from Denmark. More lavish sets and a cast of thousands announced the stupendous nature of the film, a great departure for the actress. While communication was sometimes difficult because of Lubitsch’s poor English, others made working conditions somewhat unpleasant by making xenophobic comments ridiculing the director for his accent. 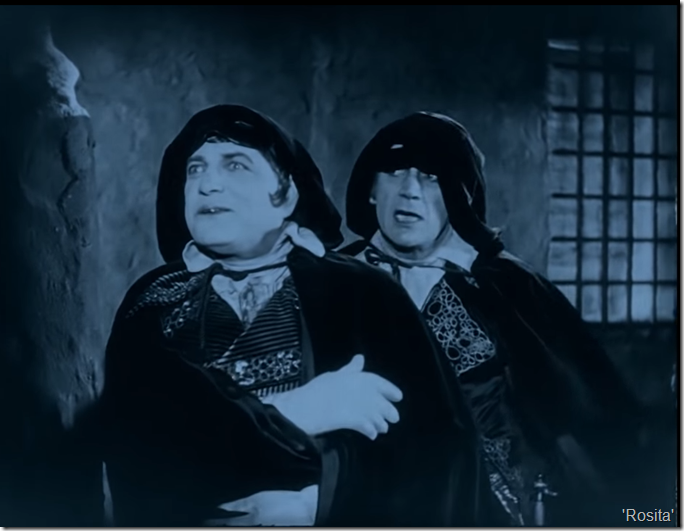 Holbrook Blinn, left, as the king in “Rosita.”

Lubitsch worked with Knoblock to develop the story into a historical dramedy of operatic proportions, cutting subtitles to reveal as much of the story as possible through acting. He worked to ensure “action that spoke,” as he told the New York Times December 16, 1923. To achieve the right emotions, the director acted out what he wanted for in each scene, with director Robert Florey, a journalist at the time, remarking that his performing outshone the cast. Twelve assistants helped direct the extras around the 47 sets.

The most difficult aspect of the whole production of “Rosita” was two control freaks fighting for ultimate power over creation. Lubitsch ruled his productions with an iron fist, controlling hiring, production, and cutting. Pickford found it difficult to take a hands-off approach to the film, since as a star her vision dominated the production of all her movies. After disagreements and arguing Pickford acquiesced to the director, telling Lubitsch that in case of a production conflict, she as producer would weigh in with the final decision.

Pickford seemed pleased with the picture as the newly titled “The Street Singer” completed production on June 3, telling staff how happy she was with the final product, and even offering Lubitsch a contract to direct one film a year for three years. That summer, trades announced that “Rosita” would open in September at New York’s Lyric Theatre. Just two months before its premiere, however, newspapers announced that Pickford had re-cut the film, and dropped any idea of signing the director to a three year contract.

While Lubitsch never worked with Pickford again, he praised her in the press. He told Motion Picture magazine in June 1924 how much he enjoyed working with her, describing “Rosita” as a “charming and wonderful experience.” The director found Pickford remarkable and stated she followed his lead, but “…her alert and intelligent mind worked like forked lightning,” watching over everything. 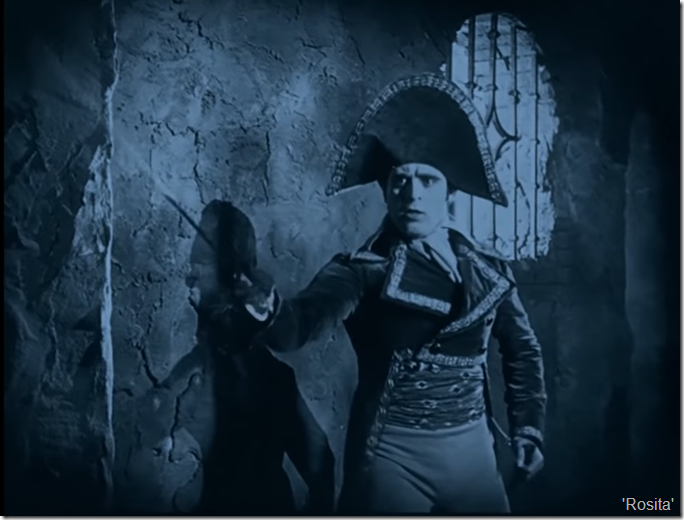 “Rosita” brought high praise upon release, as well as criticism. Virtually every critic lavished laurels on Holbrook Blinn, playing the wily king. Exhibitors Trade Review described it as full of tension, and Mary Pickford’s “most pretentious production,” as well as her greatest film. Lubitsch’s direction sealed the film’s success, with his attention to detail, coherent story line, lush atmospheric lighting, and wonderful staging, which most felt outshone that of Herbert Brenon in “The Spanish Dancer.” Moving Picture World on September 5, 1923 called it “grand opera,” a romantic adventure, filled with “whimsical humor.” Picture Plays on the other hand called it “a grown up story for children.”

Many critics called it Pickford’s most stellar acting, bringing a saucy joie de vivre to the ill-mannered girl, convincingly playing a flirty young woman. Washington Evening Standard on December 24, 1923 claimed “that the make believe story becomes real under the spell of her art… .” An ad in the January 21, 1924, San Bernardino Sun ballyhooed that Pickford “enters into her rightful heritage of glorious, vital, alluring womanhood in her characterization of “Rosita.” Lithe and sinuous…capricious and coquettish, beguiling and intriguing, flirting, dissembling – a new Mary Pickford who will be the Idol of Men and Women.”

Pickford herself seemed pleased, telling the July 1924 Visual Education that “without the experience of feeling the emotion of a child’s heart, I could not possibly have played my first grown up part.” She felt more sensitive and expressive in her portrayal in “Rosita.” 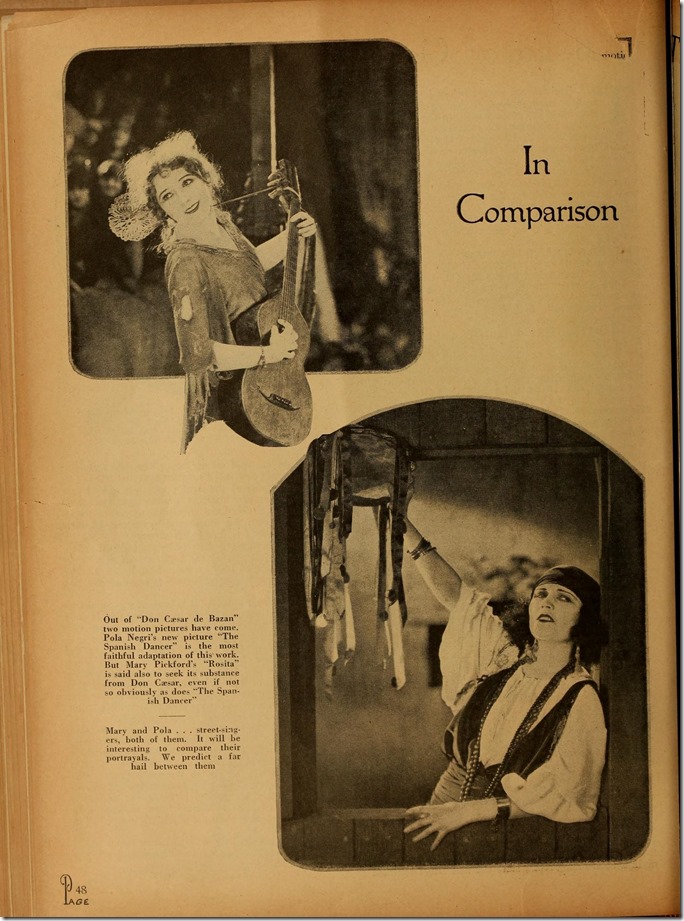 A comparison of Mary Pickford and Pola Negri as street singers in Motion Picture Magazine.

Others compared her unfavorably to Pola Negri’s fiery, wild woman in “The Spanish Dancer,” a passionate, earthy woman compared to Pickford’s charming and dainty girl. The January 1924 Education Screen called Pickford a “pert gamine as opposed to the passionate, experienced woman Miss Negri makes of her gypsy.” Screen Opinions in 1923 stated, “Mary Pickford was either not sufficiently adapted to the role of Rosita, or then that the director’s conception of the part was at variance with that of the star, for her comedy is less spontaneous, and her emotional work less effective than in other productions in which she has scored success.” She was described as a better coquette than dancer. For many, Pickford acted the emotions rather than actually feeling them.

Motion Picture magazine’s June 1924 piece accurately captured filmgoer sentiment regarding the film and Pickford’s typical roles. They claimed that “ ‘Rosita’ was too far removed from Mary’s own ‘stuff.’” The Pickfords realize that, although Mary must inevitably resign herself to be ‘grownup,’ the public does not like her in European settings or high power emotional plays.”

While most critics praised the gorgeous production as more beautiful than “The Spanish Dancer,” small town exhibitors heaped scorn on the film. Exhibitors Herald ran several reviews from theatre owners across the country, most stating that the film failed to draw audiences to the box office. Some called it “too highbrow,” others “dumb.” Many claimed young people failed to come as they didn’t know who Mary Pickford was, that her drawing power was falling in their areas. Many described the high cost of rentals, tiredness with costume pictures, and they hoped for something new and fresh.

Compared to other Pickford productions, “Rosita” drooped at the box office. Perhaps for this reason, as well as the difficulties of letting go of control, Pickford later slammed the film, calling it terrible, and refused to see it preserved. Thanks to the Museum of Modern Art’s restoration, audiences at the upcoming San Francisco Silent Film Festival can see the legendary film “Rosita” for themselves Friday, June 1 at 4:15 pm, and make their own conclusions regarding the artistry of Pickford and Lubitsch in creating it.