November 1947: A Mysterious Shooting at the Biltmore

Posted on November 9, 2018 by lmharnisch 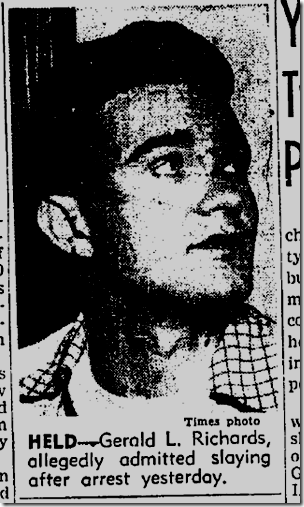 Note: This is an encore post from 2005 and originally appeared on the 1947project..

Every now and then, research presents you with a story that doesn’t make any sense. Further readings, rather than clarifying anything, only make the circumstances more confusing—and such is the case of Gerald L. Richards, 19, of Danville, Ill.

Richards was arrested after trying to shoot the Biltmore’s assistant manager, Andy Martin, during an argument in the lobby over Richards’ bill. Richards fired a German .25-caliber semiautomatic once, hitting Martin in the cheek, but found that he was out of bullets when he made a second attempt to kill Martin by shooting him in the stomach.

His 24-year-old companion, George L. Kirtland of 949 Magnolia in Gardena, told police that he had lived with Richards in New Orleans and that he was in Richards’ hotel room to recover some personal belongings. He said he sensed trouble a few minutes earlier up in Richards’ room as Richards and Martin were arguing in the hallway and removed the pistol’s magazine—although he neglected to get the bullet out of the chamber.

After Detectives Harry Fremont and William Cummings arrested the two men on the weapons charge, Richards confessed to two recent killings in which the same type of German pistol was used: The Nov. 5 slaying of Charles Vuykov, 54, a tailor whose nude body was found on the floor of his hotel room at 529 W. 3rd St.; and Tom Nitsch, who died in Socorro, N.M. “under mysterious circumstances,” according to The Times.

Unfortunately, Vuykov’s murder was never reported in The Times, nor were there any follow-up stories on Richards or Kirtland. The Times took pains to point out the extraneous fact that Kirtland was “a married man and the father of two children,” presumably to head off any speculation that homosexuality was involved.

And so we’re left with just another curiosity to add to the history of the Biltmore lobby.

Quote of the day: “Postwar building in Los Angeles is greater than that of nine largest western cities combined.”
Mayor Bowron’s committee on housing.

I am retired from the Los Angeles Times
View all posts by lmharnisch →
This entry was posted in 1947, Comics, Crime and Courts, LAPD and tagged 1947, Biltmore Hotel, comics, crime and courts, lapd. Bookmark the permalink.