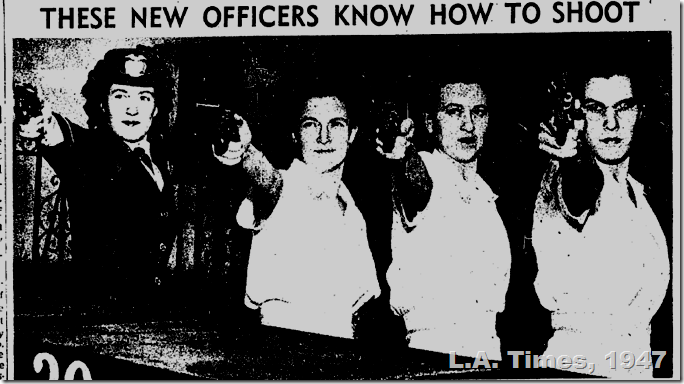 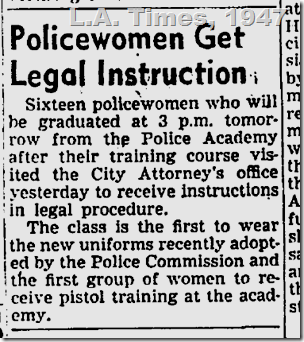 Sixteen policewomen who will be graduated at 3 p.m. tomorrow from the Police Academy after their training course visited the City Attorney’s office yesterday to receive instructions in legal procedure.

The class is the first to wear the new uniform recently adopted by the Police Commission and the first group of women to receive pistol training at the academy.

This is a puzzlement. Does this mean policewomen didn’t carry weapons before 1947? Stay tuned.

Answer: Yes! In 1947, the LAPD changed the uniform for policewomen and gave them a shoulder-slung black purse with a .38 revolver and handcuffs.

New slogan of the Draft Eisenhower for President League.

1926: San Diego Policewoman Mrs. Jesse M. Long shoots Edwin Geralds when he ignores orders to move from Balboa Park and threatens her. After she fired one warning shot into the ground, he taunted her, saying: “You don’t have the nerve to shoot me.” She got him below the knee. 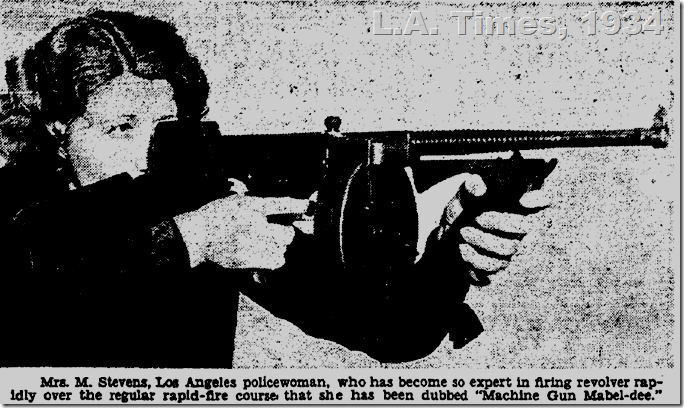 1934: Los Angeles Policewoman “Machinegun Mabel-Dee” Stevens poses with a Thompson submachine gun and 100-round drum. The Times notes that she has is one of the top shots in the department, scoring 343 out of 400.

1948: Policewoman Sgt. Sidney Ball models the new uniform, with a leather shoulder bag containing handcuffs and a revolver (it looks like a Smith & Wesson but it’s a little hard to tell).

And a bonus story from the 1956 Project: Officers captured the “Badge Bandit,” who confronted couples in lovers lanes, raped the women and robbed the men. Using decoy officers (male and female, although there weren’t enough female officers to go around so some policemen drew partners who were in drag) the LAPD finally arrested Willie Roscoe Fields, who put up a terrific struggle despite being shot.

I am retired from the Los Angeles Times
View all posts by lmharnisch →
This entry was posted in 1947, Crime and Courts, LAPD and tagged #guns, 1947, badassery, crime and courts, lapd, policewomen. Bookmark the permalink.