Mary Mallory / Hollywood Heights: ‘None Shall Escape’ Is a Powerful Look at Justice 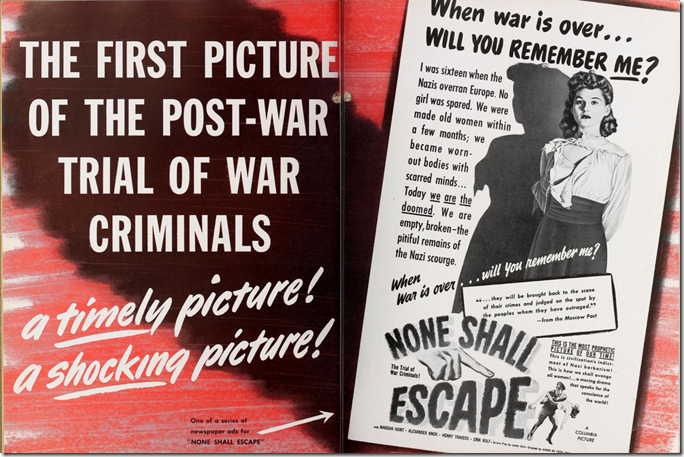 Note: TCM is airing “None Shall Escape” on Sunday night to honor Marsha Hunt. Here’s an encore of Mary Mallory’s post from earlier this year.

On Friday, April 27, the TCM Classic Film Festival presents the rarely screened 1944 film “None Shall Escape,” a thoughtful film ahead of its time, as relevant today as when it was produced. The first film to depict the Holocaust as well as to examine post World War II and the punishment of Nazis for their war crimes, it features an appearance by its legendary star Marsha Hunt, who has fought for justice and honor for all for decades. Sadly, it depicts many of the same hateful attitudes once again on the rise.

In 1943, Columbia Studios hired German exile writer Alfred Neumann, author of historical novels and the 1928 silent “The Patriot,” as a scriptwriter. Neumann’s writings had been banned in Germany by the Nazis, forcing him to flee to America, where he arrived in 1941. Following the maxim of writing what you know, Neumann created a story detailing the Nazis mistreatment of those it overpowered, and their ultimate punishment for it, the first to predict American victory and the triumph of good over evil. Screenwriter Lester Cole, one of the Hollywood Nine blacklisted for his beliefs, adapted the story for the screen. 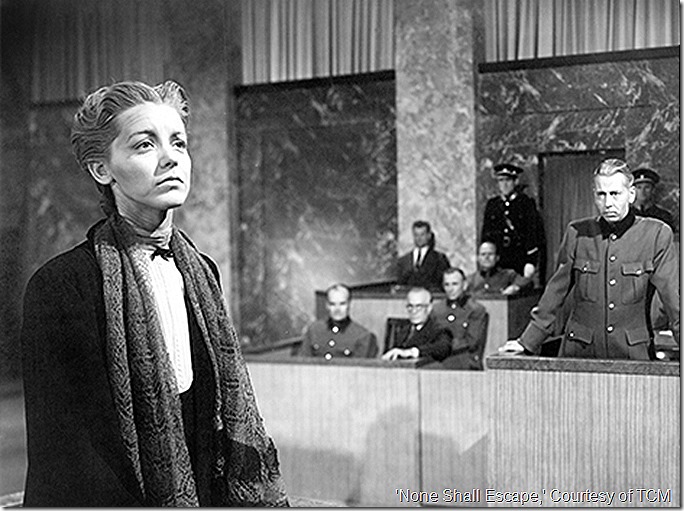 Marsha Hunt and Alexander Knox in “None Shall Escape,” courtesy of TCM.

The studio assigned producer Sam Bischoff and young director Andre de Toth, a former newspaper cameraman and film worker from Hungary who escaped to America in 1940, to develop the prescient story into a powerful motion picture. The men determined to hire newer and non-star faces to appear in the film, thus elevating the story. de Toth, directing his second film, rejected Paul Lukas, the studio’s choice for the lead, and pursued stage actor Alexander Knox, impressed by his performance in “The Three Sisters,” to star in his first film. Needing a name to help promote the picture, Columbia borrowed the intelligent Marsha Hunt from MGM, establishing the film’s pedigree.

de Toth strove for authenticity and character in “None Shall Escape,” employing real-life emigres to play Polish and German townspeople. When a scene required burning books, the director and studio issued a statement to newspapers asking for copies of Hitler’s “Mein Kampf” to burn, receiving at least 23 copies. Ahead of its time, it cast African American actor Jesse Graves as one of the judges presiding over the tribunal in the film. Marek Liblov, a representative of the Polish government in exile, served as technical advisor and consultant, and they hired a priest and rabbi to provide assistance with the actors playing these roles as well, from the first day of filming on August 31, 1943, though its conclusion on October 26. 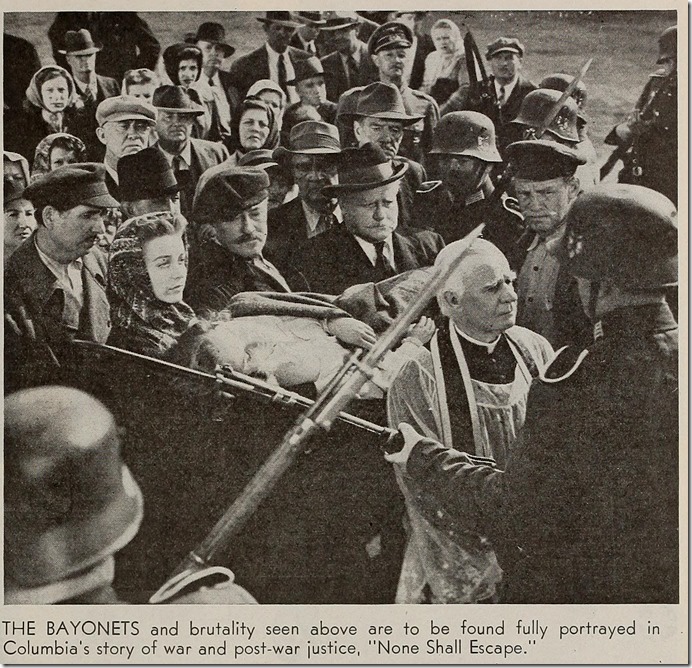 Henry Travers, center,  and Marsha Hunt in a still from “None Shall Escape” in Motion Picture Herald.

After experiencing several name changes to “Lebestraum,” “Day Will Come,” and “Night,” the studio finally settled on the title “None Shall Escape,” a fitting title for a story about deplorable villains receiving their just deserts, unable to escape scot free. This theme followed the dictum announced by Allied leaders Winston Churchill, Franklin Roosevelt, and Joseph Stalin that all war criminals would be tried and punished for their actions upon a declaration of peace.

“None Shall Escape” plays out in flashback, with former officer Wilhelm Grimm (Alexander Knox) on trial for his misdeeds and inhumane actions, a foreshadowing of the Nuremberg War Trials. We see him evolve from a school teacher with a slight injury in 1919, who takes his petty revenge out on others by becoming a Nazi who rises to power through manipulation and hatred. The opening titles set the scene. “The time of our story is the future. The war is over. As was promised, the criminals of this war have been taken back to the scenes of their crimes for trial. In fact, as our leaders promised, “None Shall Escape.” 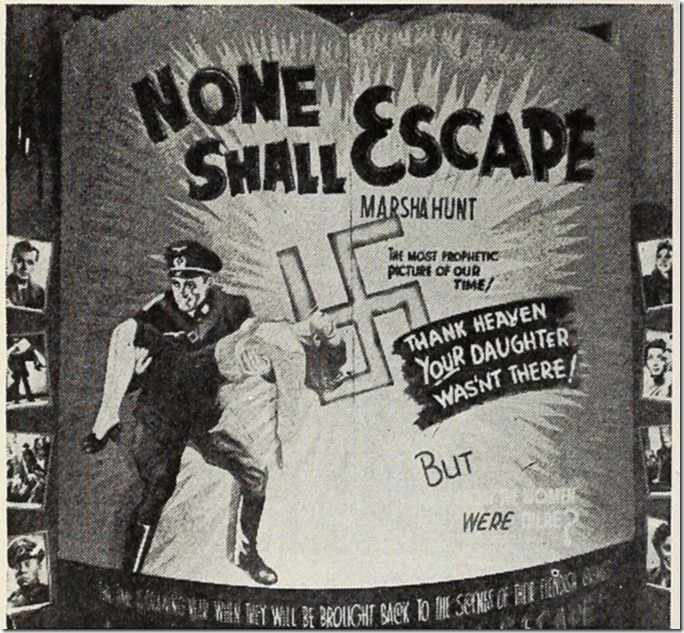 A lobby display in Scotland for “None Shall Escape,” via Motion Picture Herald.

Three demoralized and beaten down survivors of Nazi-occupied Poland testify to Grimm’s brutality, showing the moral descent of a country from honor and integrity into vindictiveness and savagery. Returning from four years of anguish fighting in the Great War, World War I, Grimm comes back to his rural town physically and psychologically wounded, with a lost leg and infected by bitterness and hatred. Verbally attacking what he considers the inferior peasantry, Grimm alienates his fiancee Marja (Marsha Hunt) and many of those around him. After seducing a young girl, he flees to Munich, where he embraces a new philosophy which provides an outlet for his sadism, attacking those who stand in the way of a new leader. He quickly rises to power through ruthless and heinous actions, selling his soul for the chance to take revenge on those he considers inferior. Returning to Poland, he takes vengeance on those who opposed him, leading to beatings, rapes, and deportation.

When released in 1944, “None Shall Escape” was the first film to depict a post-war world with the Allies in charge. Most important, it was also one of the first to honestly and graphically portray Germany’s atrocities towards those it conquered, showing the hatred of anti-Semitism, with the first portrayal of Jews suffering from the Holocaust. It shows them savagely attacked and shipped to concentration camps in cattle cars while remaining strong and stoic, taking action in attempts to win their freedom. 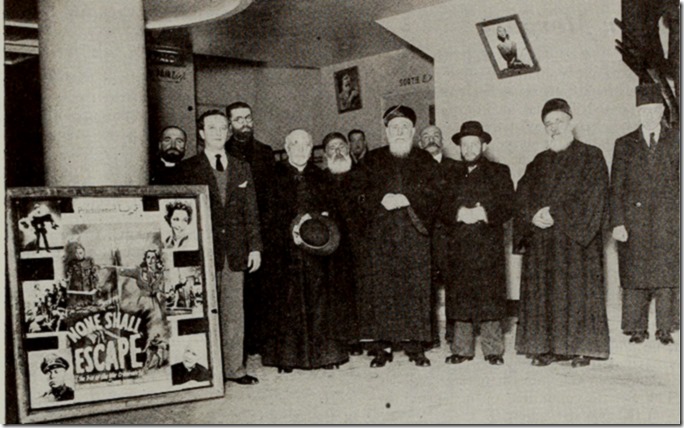 Religious leaders attend the premiere of “None Shall Escape” in Beirut, Lebanon, via Motion Picture Herald.

In the scene, the rabbi urges the Jews to resist their deportation in a powerful speech, concluding, “Tolerated! Is there any greater degradation than to be tolerated? To be permitted to exist? We have submitted too long. If we want equality and justice, we must take our place alongside all other oppressed peoples, regardless of race or religion. Their fight is ours. Ours is theirs…By our actions we will be remembered. This is our last, free choice. Our moment in history. And I say to you let us choose to fight! Here! Now!” 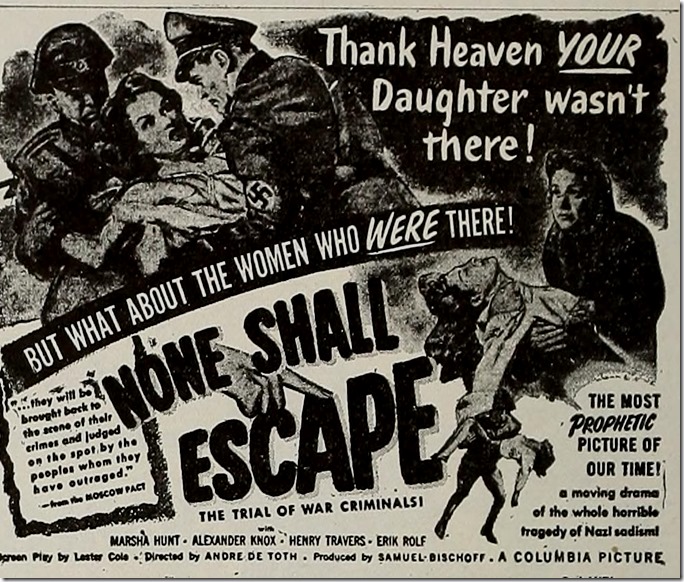 A display ad for “None Shall Escape” in Motion Picture Herald.

Many outlets praised “None Shall Escape” for its honesty and directness. Motion Picture Review called it an “important contribution to the standards of post-war thinking,” and the Los Angeles Times called it restrained but a “vivid, harrowing film.” Some called “None Shall Escape” “the most prophetic of our time.” The Manchester Guardian on August 4, 1944 thought the film not direct enough in presenting the heinous actions of the Nazis to unbelieving audiences. Others denigrated it, with Bosley Crowther in the New York Times stating that it “dishes out thick, dark gobs of anguish,” with nothing new about the Nazis, just laying out atrocities.

While “None Shall Escape” did well in upscale neighborhoods, rural areas failed to turn out for the film, leading it to fare poorly at the box office. Many people were looking for feel good or jingoistic movies, not something providing a thoughtful look at situations many failed to believe.

Ignorant audiences also showed how prejudice still existed here, with Variety reporting in July 1944 of multiple incidents in Philadelphia, Brooklyn, and other areas of bigots clapping and laughing at scenes of the synagogue burning or making insults to rabbis.

“None Shall Escape” is a powerful film of justice and truth, needed in a world where Neo-Nazis are on the rise and more than half of young people fail to understand or believe in the Holocaust.