In the early 1920s, Hollywood was booming. The adolescent film business had blossomed from a small by-the-seat-of-the pants mom and pop operation into a major industry backed by Wall Street, which was turning the large companies into international conglomerates. At the same time, major stars saw their compensation explode, especially if they owned their own production companies and received profit participation. Superstars like Douglas Fairbanks, Mary Pickford, Harold Lloyd, and Charlie Chaplin and executives like Joseph Schenck and Thomas Ince earned more in yearly salaries than important financial, professional, and business leaders.

To acknowledge their place in the Hollywood pantheon, many of the industry’s leaders constructed elaborate mansions and showplaces outshining even that of actual royalty. Pickford and Fairbanks reigned at Pickfair, Lloyd built the magnificent Greenacres, and Frances Marion and Fred Thomson established their Enchanted Hill. Producer Thomas Ince followed along, constructing his own impressive hacienda, one that hearkened back to the glorious early days of California called “Dias Dorados.”….

Born Nov. 16, 1880, to actor parents, young Tom Ince was virtually born in a trunk, traveling on the road with his parents and brothers across the country when not left with friends of their parents. At a young age, Ince joined his parents in vaudeville and gradually worked his way up to starring in stock companies. He first played on Broadway at the age of 22 in “At the Old Crossroads.” Like any other actor when the season closed, Ince performed a variety of odd jobs while hoping to get his big break.

Looking for work in 1910, Ince stumbled upon old friend Joseph Smiley, who informed him that he was working as an assistant director for a small film company known as the Independent Motion Picture Company (IMP). Ince landed a job as a stock actor before performing in one Biograph film, “His New Lid,” which helped him land not only a raise with IMP when he returned, but also the opportunity to direct.

Ince never looked back, quickly climbing the ladder of success. He established what became known as Inceville in 1912 to shoot westerns with the Miller Brothers 101 Ranch Wild West Show (later known as the 101 Bison), moving into social issue films and other realistic stories. As the company churned out more and more films, it required a system to facilitate production, leading Ince to revolutionize the industry through the creation of the continuity script and segmenting of production, per Brian Taves in his biography, “Thomas Ince: Hollywood’s Independent Pioneer.”

The innovative executive would help create the assembly line creation of film product and establish the name “Thomas Ince” as a brand signifying quality in film production during his time with Triangle. An industry leader after only eight years in the business, Ince soon established a state-of-the-art studio in Culver City in 1918.

By 1921, the overworked but ambitious Ince finally took action on creating the home of his dreams, one highlighting the romantic Spanish history of California with the name “Dias Dorados” or “Golden Days.” Taves describes how in 1921 the successful producer purchased an over thirty acre site off Benedict Canyon in Beverly Hills at $2,500 an acre to build his palatial mansion, one of the first, along with Harold Lloyd and James Kirkwood’s homes, to go up in the Beverly Park development. It would cost $250,000 to construct, and be located at 1051 Benedict Canyon Road, off of Angelo Drive.

As described in the August 1924 issue of Sunset magazine, “Situated on a height in Benedict Canon the residence was planned to view an inspiring panorama of the hills on one side and the gleaming Pacific on the other.” Architect Roy Selden Price designed a stunning hacienda out of early Mission Days, filled with elegant tile, wood carvings, fixtures, balconies, romantic arches, and other picturesque designs, one which took almost two years to build. As Universal Weekly stated in its June 4, 1927 issue, “The entire interior decorations reflect the serene tastes of a Spanish grandee and the overlord of thousands of acres under cultivation, the grandeur and glory that once was Spain.” 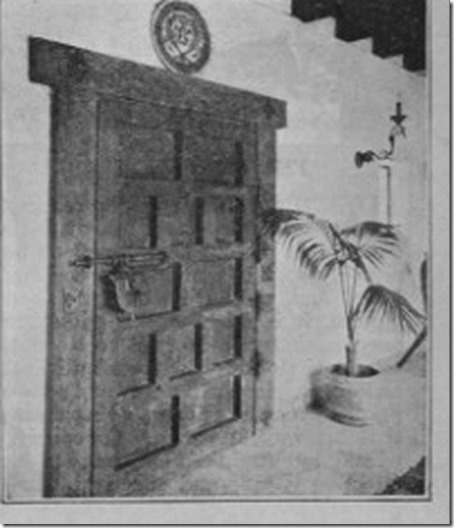 Visitors descended a dark narrow passageway illuminated by pressing a button at the entrance, leading to an elaborate projection room resembling a pirate ship galleon. Red and green lanterns suspended from the ceiling provided illumination as one entered with a giant stained glass figure of a ferocious pirate with a knife in his mouth in the background. Ladders, rigging, wheel, sails, and caulked floors all mimicked that of a ship 30 feet long by 8 feet wide. Pulling a cord near the pirate unrolled a white canvas screen in front of it.

One entered the billiard room through a “secret staircase” hidden behind a tapestry that opened by pressing a button, with a winding staircase leading down to the oval billiard room, all composed of native rock. Another room contained framed autographs of famous people like Presidents George Washington, Thomas Jefferson and Andrew Jackson, Benjamin Franklin, Edgar Allan Poe, Marie Antoinette, and Mark Twain on the walls.

Sunset stated, “While grilled balconies, tiled roofs and the patio are characteristic of Old Spain, the modifications practised by necessity in colonial Mexico and “Alta California” make the architecture of the New World even more picturesque. Blending the subtle influences of centuries of art with the force of the pioneer, the architect has here emphasized age in finish, simplicity of line and decorative details… .

In numerous other details “Dias Dorados” is a delightful mirror of an earlier century. The ollas made by potter’s wheel on the domain, primitive lamps that are moved up and down by chains, niches over the doors, rafters tied with skins, hand-woven rugs and tiles splashing their gay colors here and there, are as atmospheric as the “Rose of the Rancho.”

Unfortunately the mighty producer had little time to enjoy the house himself, passing away from heart and intestinal problems on November 19, 1924. His widow Elinor and children continued living in the house through 1926, after probate was settled on the almost $850,000 Ince estate, with the home valued at almost $250,000.

Missing her husband and feeling lost in the massive estate, Mrs. Ince put it up for sale after purchasing the smaller Corinne Griffith estate nearby. Universal chief Carl Laemmle purchased the house and land for $650,000, with $250,000 in cash and the rest notes, taking possession of the home and the entire furnishings February 22, 1927. Moving from his long time home in New York, Laemmle renamed the estate “Casa Grand Del Monte” and moved in with his adult children Carl Jr. and Rosabelle. Rosabelle married business Stanley Bergeron in the gardens February 2, 1929.

In July 1942, attorneys for the Laemmle estate and next door neighbor Harold Lloyd attempted to reduce taxes on the properties, with the July 30, 1942 Los Angeles Times stating they claimed “Hollywood mansions have no market because of increased income taxes, making it impossible for owners to earn enough to maintain them.”

The April 23, 1943 Jewish Post reported that the family allowed the home to serve as a rest home for wounded soldiers after they moved out. Closed for several years after the war, the family reopened it in September 1949 for a fundraiser for the Organization of Rehabilitation Through Training.

It took years for the estate to sell off the property. The city of Beverly Hills purchased 9.5 acres in 1951 to establish a school, and finally in 1955 the remaining land was sold to investor Sadie Gildred. Eventually the home and outbuildings were demolished and the land subdivided for new mansions.

While the resplendent hacienda is no more, it served as a glorious example of the rise of Alta California and the glory of early Hollywood.