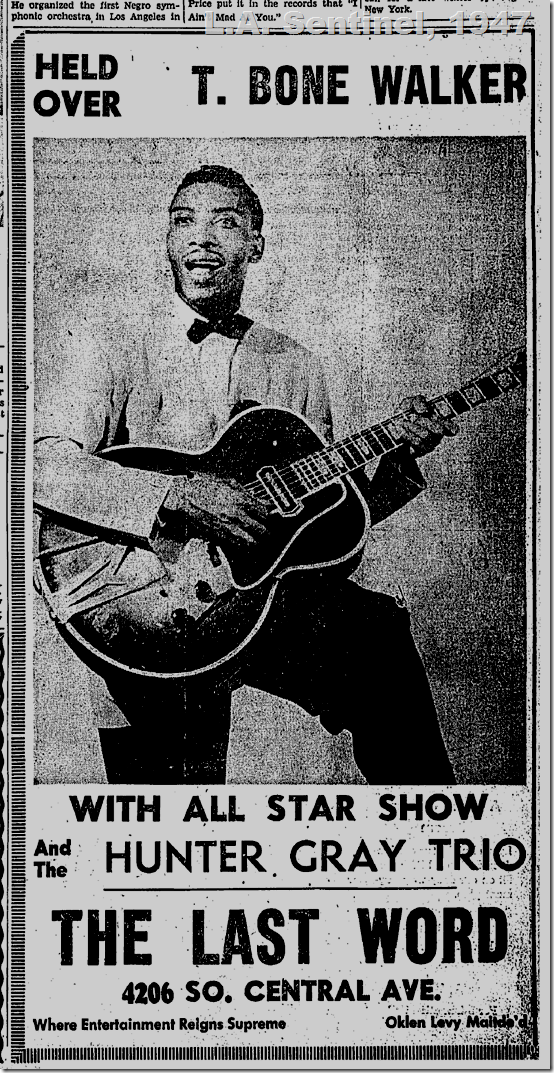 Sept. 18, 1947: The Sentinel reports the intriguing production of an all-black, musical version of “Camille,” produced by Thomas Hammond with a score by Serge Walter, lyrics by Rene Du Plessis, starring Herb Jeffries.  A previous commitment prevented Lena Horne from appearing in the show, the Sentinel said.

A brief in the Los Angeles Times (Sept. 9, 1947) adds that Marvin Mar was adapting the novel for the production. Daily Variety reported (Sept. 10, 1947) that the production was supposed to open in Los Angeles and move to New York.

The New York Times reported (July 21, 1947) that the scenery was being designed by Sydney Engelberg. The Times said (Nov. 20 1947), that the production was sponsored by Ben Marden. Hammond told The Times that the production depended on whether he could sign Margaret Webster as the director. Webster was on the West Coast helping her ailing mother, Dame May Whitty, and wasn’t expected to return to New York for several weeks, The Times said.

The Sentinel and The Times said that a movie adaptation was also being discussed, to be filmed in England or Canada.

And none of it ever happened.

Margaret Webster, who died in 1972, had a long career, directing many Shakespearean plays on Broadway, but she’s the exception in this project. Serge Walter has rather slim musical credits, mostly contributing an additional song or lyrics (as in “Gay Parisienne” in “The Desert Song”). He appears in the Internet Broadway Database and IMDB. Rene Du Plessis has Broadway credits for appearing in “Three’s a Crowd” and “Roberta,” both in the early 1930s. Marvin Mar is an even more enigmatic figure. Someone by that name was a production assistant on “Candida,” produced by Hammond in 1952.

Hammond died July 1, 2004, in Granite City, Ill., after a long illness. According to Playbill, he was a lawyer, manager and producer who represented Bette Davis and encouraged her to make some of her later films. Hammond also helped Bernadette Peters launch her career.  He is listed as a production associate on Leonard Bernstein’s “Candide” in 1956.

I am retired from the Los Angeles Times
View all posts by lmharnisch →
This entry was posted in 1947, Music, Obituaries, Stage and tagged 1947, African Americans, Camille, Los Angeles Sentinel, Music, stage, Theater. Bookmark the permalink.