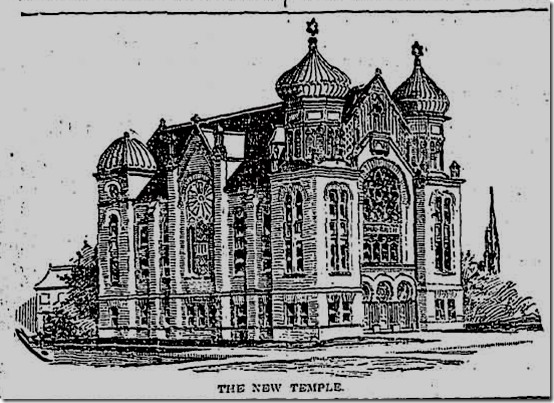 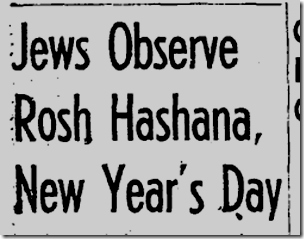 The ram’s horn, once a trumpet of war but now a symbol of faith, sounded at sundown yesterday in Los Angeles synagogues to mark the dawn of the Jewish New Year, Rosh Hashana.

In Temple Emanuel, Beverly Hills, Rabbi Ernest Trattner told the congregation that “New beginnings come, not in new seasons, but in new attitudes. Solutions of life’s problems come, not in the passing of time, but in self-discipline and self-dedication. Let us start the year with God and keep step with Him all the year and peace and power and gladness shall be ours.”

Speaking in Temple Beth Aaron, Rabbi Alfred Wolf, western regional director of the Union of American Hebrew Congregations said: “Long before the ram’s horn became a religious symbol it was the trumpet of war. Today the shophar calls us to mobilize for peace; peace between each man and his neighbor and peace among the nations.”
::
The Times’ first mention of Rosh Hashanah (often spelled Rosh Hashana) appears in 1886. Two years later, the paper carried a long account of services at the synagogue on Fort Street (renamed Broadway in 1889) south of 2nd Street. A portion of the synagogue was discovered during excavation for The Times parking structure on Broadway and a plaque marks the site.

“Some pepper trees, which have so far escaped the ax of modern vandals, throw their pleasant shade upon the walk. It was built some 15 years ago and belongs to the B’nai B’rith, children of the covenant of the reformed branch of the Hebrew Church,” The Times said in 1888.

By 1899, in addition to the synagogue on Broadway, there were services for conservative Jews at Kramer Hall on 5th Street and Orthodox services at Turnverein Hall on Spring Street between 2nd and 3rd Streets. At least one year, services were held at a Unitarian Church and another year they were celebrated at the American Legion Hall in Hollywood. Services were also held at the Los Angeles County Jail beginning in the 1920s. By the 1930s, congregations met at the Wilshire-Ebell Theatre and the Ambassador Hotel.

One of the more dramatic locations for services was the Hebrew Sheltering Home for the Aged at 325 S. Boyle Ave., where residents ranged in age from 65 to 103 in 1939.

Times stories about Rosh Hashanah were quite detailed around the turn of the 20th century, with reporters attending services and quoting sermons at length. Coverage dwindled over the next few years but in the early 1920s, The Times devoted long stories to broadcasts of services on its radio station, KHJ.

A sample of sermon titles given in Los Angeles for Rosh Hashanah:

1933: “What Is the Cure for This Sick World?” “If Hitler Could Understand the Significance of the Word ‘Truoh’ Would He Prefer the Program of Mephistopheles to That of Roosevelt?”

1936: “Polish Jews as I Met Them.” Money collected at Rosh Hashanah services by the Federation of Polish Jews of California was used to help Jews in Poland.

1938: “What Has the Jew to Hope for?” and “A Year of Sorrow.” A new work by Arnold Schoenberg and Ernst Toch was performed for the congregation of Fairfax Temple at the Ambassador.

1939: “The Challenge to Society in These Terrible Days” and “On the Brink of the Abyss.”
“As far as the Jewish situation is concerned, the last 12 months portray one of the blackest chapters in history. Today we appear as humble beggars at the portals of the universe, uttering fervent prayers for life and liberty,” said Rabbi Mayer Winkler of the Community Synagogue.

1942: “Is the Jew Necessarily Destined to Live Forever?”

1943: “Begin All Over Again in a New World.” This year was one of the few times Rosh Hashanah was mentioned on the paper’s editorial page.

1945: “The Power of the Atom, Physical and Spiritual” and “Universal Peace.”

I am retired from the Los Angeles Times
View all posts by lmharnisch →
This entry was posted in 1947, Architecture, Downtown, Religion and tagged 1947, religion, Rosh Hashana. Bookmark the permalink.