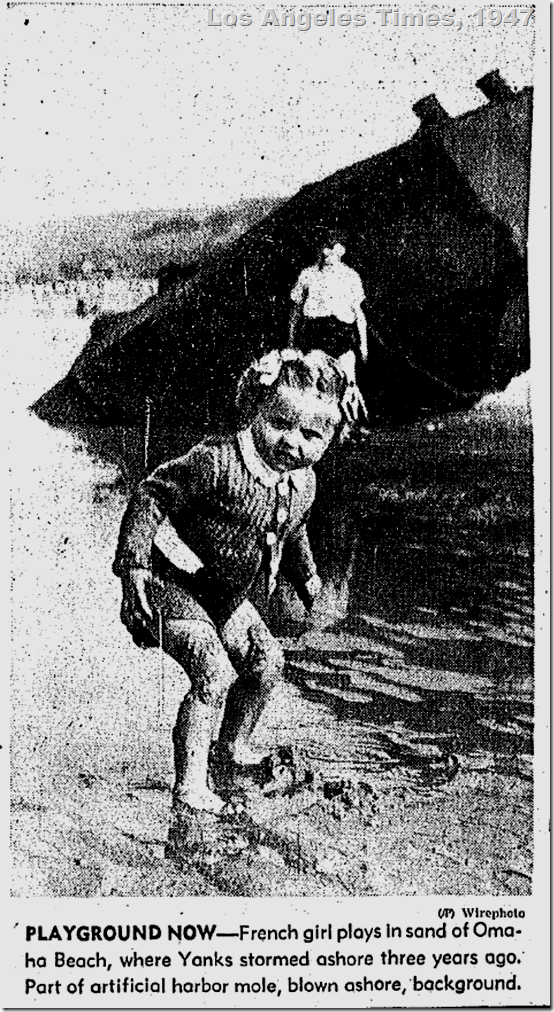 On its photo page, The Times ran a picture of a young French girl romping in the water at Omaha beach. In another, Maj. Robert Crisson poses on a rusting operations boat and gazes across Normandy beach, where he led an infantry company in the first wave of invading troops June 6, 1944. Of those 600 men, only seven survived the war, Crisson says. 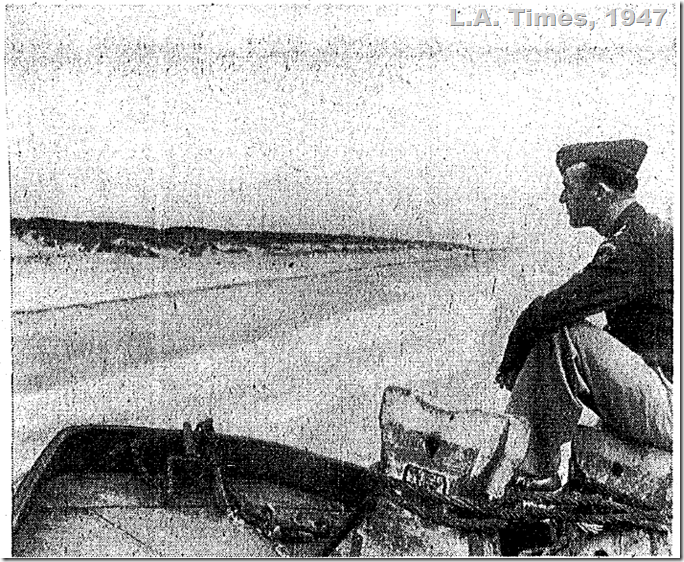 At Muroc Airfield, the Army and Navy put on a show of aviation wonders. Included are a prototype of the Flying Wing, the N9M, and an orange bullet plane called the XS-1 flown by Charles “Slick” Goodlin, an aircraft that will make history in October when it breaks the sound barrier flown by Chuck Yeager.

The Times leads with a curious story that began six months before. William L. Bruce of Buena Park was shopping with his wife and mother-in-law at a downtown department store when he stunned to see a supervisor nicknamed “the meatball” from the Japanese POW camp where he been held after surviving the Bataan Death March.

Suppressing his first impulse, Bruce trailed the man to his car, noted his license plate number and gave it to the FBI. On June 6, The Times reported, the FBI arrested Tomoya Kawakita, a Japanese American born in Calexico, Calif., and living at 220 S. Hicks Ave., who was trapped overseas during the war while attending Meiji University.

Because of his dual citizenship, Kawakita was accused of treason. After an 11-week trial filled with gruesome testimony by survivors of the Oeyama prison camp, and jury deliberations that stalled several times over eight days, Kawakita was convicted and sentenced to the gas chamber. His mother, Tose, wept throughout his sentencing and he begged her not to commit suicide.

Rejected upon appeal to the higher courts, Kawakita was imprisoned at Alcatraz when President Eisenhower commuted his sentence to life in prison in 1953. A decade later, President Kennedy released him from prison to be deported to Japan. His whereabouts are unknown.

One of the four N9Ms, the only surviving example of the Northrop’s Flying Wing, has been restored and is on display at the Planes of Fame in Chino.

I am retired from the Los Angeles Times
View all posts by lmharnisch →
This entry was posted in 1947, Crime and Courts, World War II and tagged 1947, crime and courts, POWs, World War II. Bookmark the permalink.