Alan Ladd and Veronica Lake in “The Blue Dahlia,” which launched the festival.

Dark dives, shady dames, and sleazy P.I.s populate the sordid underbelly of the sunny City of the Angels in Noir City: Hollywood, the Film Noir Foundation’s 20th anniversary Film Festival screening noir at Hollywood’s Egyptian Theatre now through Sunday, April 22. In honor of the occasion, all films feature major location work in and around Hollywood and the City of the Angels, highlighting such iconic structures as Los Angeles City Hall and the Hollywood Sign and preserving on film such lost treasures as Bunker Hill.

The festival has already screened such iconic films as “The Blue Dahlia” and “Kiss Me Deadly,” and the 1992 celebration of the genre, “L. A. Confidential,” featuring an appearance by the profane devil dog himself, James Ellroy. Such diverse places as Bunker Hill, Angels Flight, City Hall, Hollywood Athletic Club, Venice Pier, Westwood, and the industrial area of Hollywood played important locations and metaphors in these films. 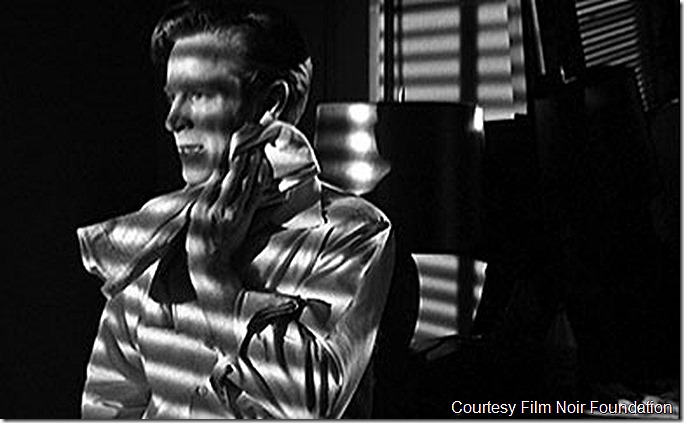 Richard Basehart in “He Walked by Night,” based on an actual case, has Jack Webb in a small role and inspired him to begin “Dragnet.”

Tuesday focuses on dark shadows and threatening streets with the powerful double feature “He Walked by Night” and “Down Three Dark Streets,” the first motion picture to employ the Hollywood Sign as an ironic and intentional major plot point. Both focus on employing new technologies to stop dastardly demons in their paths of disaster. 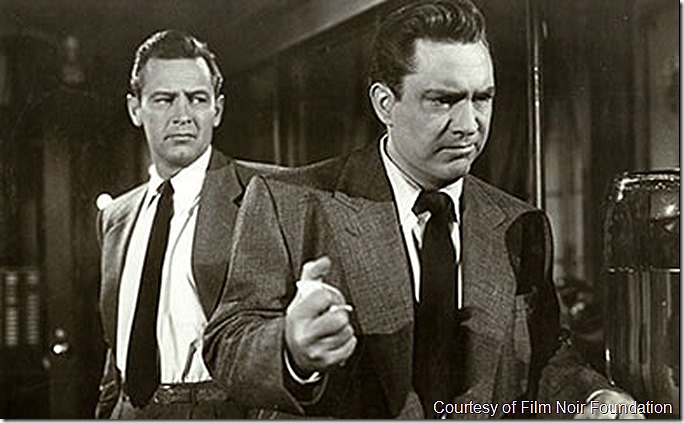 William Holden and Edmond O’Brien in “The Turning Point,” newly restored by Paramount for this showing.

The Thursday screening combines ultra-rare screenings of two Paramount film noirs, “The Turning Point,” with William Holden and Edmond O’Brien in a story ripped from the Kefauver Committee’s investigation into organized crime, and the Michael Curtiz-directed “The Scarlet Hour,” featuring an appearance by the great singer Nat “King” Cole. Rode will sign his masterful biography of Curtiz preceding the films in the Egyptian Theatre lobby at 6:30 pm.

Friday’s films salute the work of Hungarian directors, from the adult suburban angst of Dick Powell and Lizabeth Scott in Andre de Toth’s “Pitfall,” with location filming along Wilshire Boulevard and at the famed May Company, to the story of displaced European artists adrift in sun-baked Los Angeles in an unusual combination of art film/psychedelic dream in the last American film by director Gustav Machaty.

Evelyn Keyes, left, and Van Heflin, right, in “The Prowler,” restored by the Film Noir Foundation.

For those looking for a full dose of noir and Joseph Losey-directed films, The Egyptian Theatre is the place to be Saturday night with a triple bill of corrupt cops, child molesters, and a teen out for revenge all around downtown Los Angeles, Bunker Hill, and the Bradbury Building. The evening opens with the Film Noir Foundation restoration “The Prowler,” featuring a skewered look at the American Dream not too dissimilar from today’s dark news headlines. Losey’s 1950s remake of the 1931 “M” follows, with a child molester simultaneously hunted by criminals and the police, a meditation on the repression and witch hunts of the 1950s. “The Big Night” rounds out the evening, with a raving teen out for revenge on the thug who brutally beat his father.

Angels Flight is featured in “Act of Violence,” screening Sunday at the Egyptian Theatre.

The festival goes out with a bang on Sunday night by highlighting the fading glory and going to seed atmosphere of Bunker Hill and Angels Flight with two intense films, “Act of Violence” and “Night Has a Thousand Eyes.” Psychically scarred Robert Ryan goes on the hunt for war hero Van Heflin in “Act of Violence,” legendary director Fred Zinnemann’s only attempt at film noir. Edward G. Robinson plays a bogus carnival mentalist who suddenly finds himself cursed by actually seeing into the future, and predicting doom for those around him in the night’s second film, “Night Has a Thousand Eyes.”

Come enjoy a walk on the wild side and attend the 20th Anniversary Noir City: Hollywood at the Egyptian Theatre.