The evolution of a community can often be acknowledged through the types of businesses along its main streets. Simple buildings from its days as an unpretentious neighborhood or small town often give way to more elaborate and ostentatious facades as the surrounding area gentrifies and grows more wealthy.

In the same way, accommodations evolve, demonstrating the area’s change from rural outpost to suburban bedroom community. Mom-and-pop auto courts from one-highway days develop into chain or upscale inns, or perhaps even disappear altogether, as high-end restaurants or boutiques take their place.

Ventura Boulevard from Vineland Avenue to Laurel Canyon illustrates the evolution of a community from its days as farming area in the 1920s through rural pass-through and finally successful enclave, with quaint motor courts often giving way to higher-grossing properties. In the area’s earliest days, it served as the incoming highway from Santa Barbara and the far western areas of the San Fernando Valley, a perfect spot for tired travelers looking for a night’s lodging before completing their long journeys.

On March 3, 1928, owner Fred Rushton pulled a permit to construct a Class-D four-room auto court for two families at 10980 Ventura Blvd., designed by architect Roy L. Jones. He added a permit for two additional rooms for his Rushton Auto Court within days, and on January 8, 1929, applied for a permit to construct a cafe. Somewhere along the way he built a service station as well.

In 1933, an ad refers to it as the Tower Auto Camp, but within a few years ads call it the Tower Auto Court. This matchbook from the late 1930s shows its name as the Tower Motor Hotel, an official AAA approved motor court. The inside lists amenities such as “steam heat, air cooled,” along with the Cruze Inn Cafe offering “appetizing food.”

By 1938, Stephen Treadwell purchased the property from the Rushtons, pulling permits June 8, 1938, and September 20, 1939, to relocate the service station to the rear of the property and convert it into a sleeping room with bath and garage, and then build another service station. Earlier that month on September 7, Treadwell asked for a permit to move the 11’ x 11’ tower sign 50 feet east.

Union Oil Co. owned the property by August 3, 1949, when it pulled a permit declaring interest to turn most of the property into a beauty parlor, and add a steel canopy on the front exterior. By February 1966 the company had converted the property into a duplex, when it demolished and cleaned the lot. It appears that possibly the Shell Gas Station now occupies the former site of the hotel.

Further west down the street at 11514 Ventura Blvd., Samuel A. Weinstein constructed a Class-D motor court per the November 21, 1945, Los Angeles building permit. The matchbook prominently plays up mention of the fact that the motel stands adjacent to the burlesque Zomba Club. The inside of the matchbook calls it “Sammy’s Happy Valley Motel – the motel of Tomorrow To-day!” Amenities include 24-hour room service, refreshing tile showers, soundproofed rooms, beauty rest mattresses, and attractive rates.

By 1952, A. Charles De Rosa pulled permits to repair fire damage, perhaps caused by unruly tenants. Transient residents run scam businesses out of the property through the 1970s, some arrested per newspaper stories. The May 9, 1957, Star News reports that two men checked in and when they left the next morning they absconded with the television, TV stand, chair, mirror, and ash tray, all valued at $150. No word if they were ever captured. That year police made a narcotics sting at the motel as well.

A March 2, 1962, permit reveals John Gasporini as owner of the motel, cafe, and laundromat, and in 1964 the motel is now called the Valley Palm Motel. In the late 1980s, owner Hossein Forat operates Forat Electronics there. In 1991, he requests a permit to demolish the structure and construct a carwash. A carwash remains to this day, the Hand Car Wash, known for its giant hand beckoning customers. 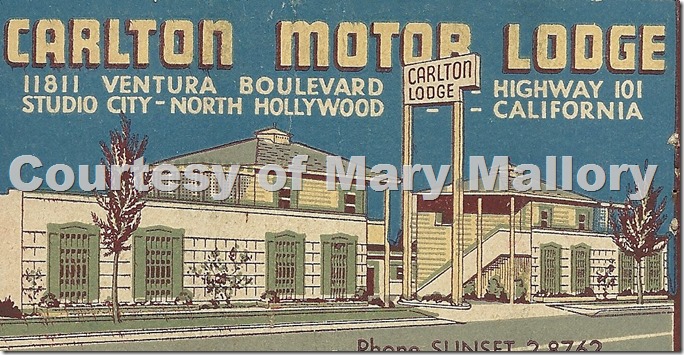 During the 1950s, Mandel converted the linen room into a small kitchen and by 1956 sold to L. B. Blair. Duncan Hines Lodging guides list the property as a suitable resting stop for years, stating in its 1959 edition that single rooms cost $4, and two rooms cost $5 to $8. In 1962, owners added neon around the two-story Carlton Motor Lodge decorative sign, making it an attractive beacon with which to lure customers.The motel remains to this day, spiffed up but unfortunately the lustrous neon look has been replaced by a typical but plain marquee sign.

As Studio City evolves into a more prosperous community, these quaint small mom and pop roadside inns are slowly giving way to commercial enterprises or more hip accommodations, and losing a bit of innocence in the process.