Mary Mallory / Hollywood Heights — The Gibbons-Del Rio House: Like Stepping Into a Dream 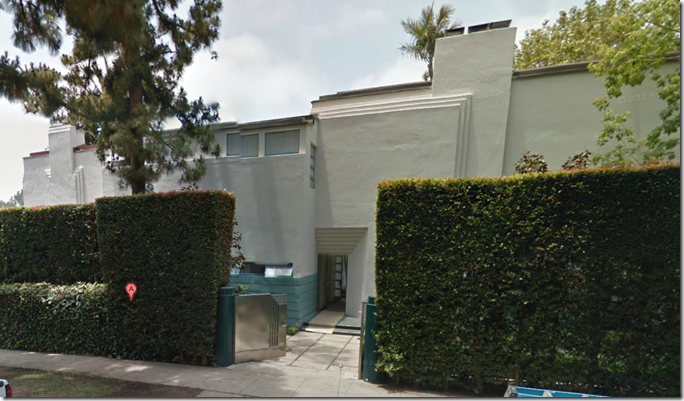 Celebrity has often been the cachet for creating style, fashion and cultural trends, especially with the advent of films. Stars wearing a particular designer’s couture, driving a certain car, or a female star wearing pants, started tongues wagging and led average citizens to try to copy their style. Movies themselves fashioned popular trends in music, style and even architecture.

The gorgeous jewel box of a home belonging to 11-time Academy Award-winner MGM art director Cedric Gibbons and his wife, actress Dolores Del Rio, epitomizes Hollywood glamour, and still stands as one of the outstanding examples of home as art in Hollywood. All sleek lines and geometric patterns, it stands as a Streamline-Moderne masterpiece, the perfect representation of one of Gibbons’ MGM luxurious set designs come to life.

Dolores Del Rio in the home, from Photoplay, 1931.

The son of an architect, Gibbons was born March 23, 1890, in New York, where he was privately tutored and intended to follow in his father’s footsteps. He traveled to Europe on a Grand Tour, studying architecture, and enrolled in New York’s Art Students League once he returned. Gibbons joined his father’s firm, working two years as a draftsman, which quickly bored him.

In 1914, motion picture art director and sculptor Hugo Ballin hired him as an assistant to help design sets for films, and Gibbons’ career trajectory was set. After working as an art director for Goldwyn Pictures in 1916, Gibbons joined the United States Navy in 1917. After the war, he became art director in chief at Goldwyn’s new Culver City lot, where he would go on to work for almost 40 years.

Dashing and urbane, Gibbons — a doppelganger for William Powell — ruled his large department at Metro-Goldwyn-Mayer like any founding architect of a large firm: he acted as project head, with designers reporting to him with plans for each film, drawn up by illustrators. Gibbons established the vision for each project and then ensured that the designers adhered to that plan.

After attending the International Exposition of Modern Industrial and Decorative Arts in 1925, Gibbons introduced the Art Deco style in sophisticated, black and white sets for MGM films. As Gibbons told the Los Angeles Times for an April 8, 1928, article, “Motion pictures set the vogue in wearing apparel styles. Fashions always find their way to the screen before they strike Fifth Avenue. So it is with architectural and decorative styles. The screen designer must search them out and be the first to use them.”

Jeffrey Head, in the 2006 Los Angeles Modernism catalogue introduction, notes: “By establishing the streamline art moderne “look” for MGM during the late 1920s, Gibbons effectively introduced modern design to the American public on a popular scale, influencing a generation of home furnishings and interiors. For many people, their only exposure to the art moderne movement was through Gibbons’ set designs.” Gibbons’ work swayed public taste toward Art Deco and Streamline Moderne with its jazzy, striking staircases, ceilings and lines. Gibbons would be among the first in Los Angeles to employ Streamline-Moderne for his residence, built as the ultimate wedding gift for his bride. 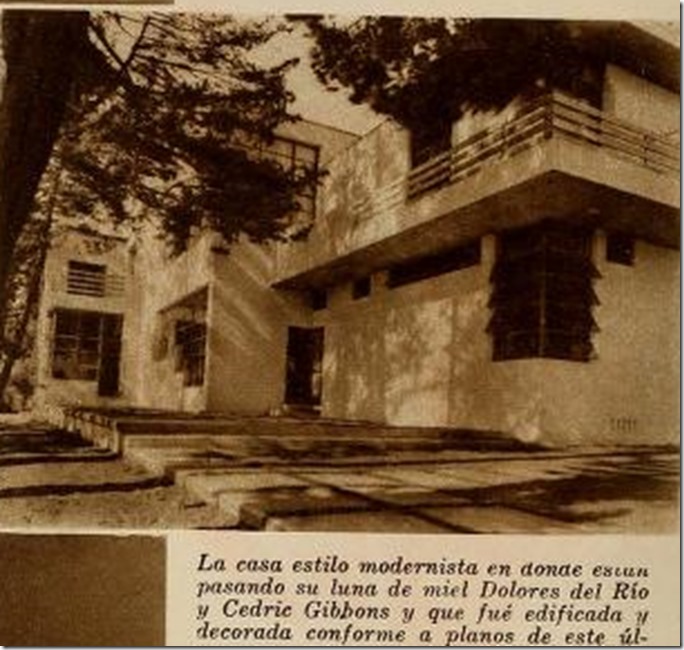 A  shy, quiet man, Gibbons fell in love with the striking Mexican actress Dolores Del Rio at first sight, per the story Del Rio relayed to journalist Gladys Hall in a 1931 Movie Classic magazine article. While she was working at MGM on the film “The Trail of ’98,” Gibbons would come to the set to watch her work, and asked director Clarence Brown to introduce him to what he called, “the most beautiful thing in Hollywood.” Brown refused, stating that she was cold and lifeless, particularly after divorcing her husband, who soon died of illness. Gibbons couldn’t get up the courage to approach her, and whenever he went to cocktail or dinner parties, he hoped to run into her. At a Marion Davies’ party, he finally made an introduction, and supposedly the couple were making out 10 minutes after being introduced. As Del Rio exclaimed to Hall, “All women love a man like that – let them pose and be superior as they will! I loved it! I knew, mysteriously and surely, that I loved him.” Within six weeks the couple were engaged, and quickly married at the Santa Barbara Mission on Aug. 6, 1930.

Gibbons asked fellow MGM designer and architect Douglas Honnold to assist him in a designing a spectacular showcase in which to accentuate the beauty of his lovely wife. While the streetscape at 757 Kingman Ave. in Santa Monica was as reserved as Gibbons, inside, the home was Hollywood fantasy come true—an angular black and white sophisticated vision offering the perfect backdrop for glamorous entrances and appearances by his striking wife.

As Oscar Romoldi points out in Hollywood Studio Magazine, the interior space was ingeniously laid out by a master craftsman, in what Romoldi called “Streamline Moderne meets Bauhaus.” Perfect composition and lighting highlight the theatrical living spaces in the 4,744-square-foot, three-bedroom, three-bath residence. Setbacks around the front door, fireplaces, and walls, geometric patterns, black terrazzo floors, and white walls reflected the shiny industrial look of moderne in dramatic fashion. The first floor consisted of a library, breakfast room, kitchen, dining room and guest suite, with a two-story brushed steel staircase the center of attention, leading up to the home’s grand public area on the second floor, which featured large windows and dramatic lines overlooking the two-bedroom guesthouse, swimming pool, tennis court with viewing area, and expansive lawns.

The 25 by 45-foot-stylish living room and grand salon served as dramatic backdrop for entertaining, with built-in lighting and furniture by designer Paul Frankel. All-black baths featured stainless steel detailing, with hot and cold running water operated by foot pedals. Mirrors dominated the house, reflecting the shiny surfaces and emphasizing glamour and beauty. Gibbons and Del Rio possessed their own bedrooms on separate floors, but a secret staircase led from one dressing room to the other, and Del Rio’s dressing room also featured a trap door that opened to the stairs.

The couple entertained lavishly for almost 11 years, hosting regular Sunday afternoon parties dominated by tennis, Gibbons’ passion. Unfortunately, on March 15, 1940, Del Rio walked away, filing for divorce that December. The couple settled out of court, with Gibbons retaining ownership of the house, which he sold in December 1946 to actor Van Johnson for $125,000, per the Los Angeles Times.

Over the decades other owners have restored and honored this lovely jewel, including Los Angeles attorney and developer Ira Yellin, and film producer Joe Roth. The home has even been featured in such movies as “To Live and Die in L.A.” and “Twilight” starring Gene Hackman. The current owners succeeded in adding it to Los Angeles Historic-Cultural Monuments list last summer, as HCM No. 1038, a perfect representative for Hollywood’s Golden Age.

3 Responses to Mary Mallory / Hollywood Heights — The Gibbons-Del Rio House: Like Stepping Into a Dream