A still of Shaw and Lee from “The Beau Brummels” is featured in the promotional material for a special program honoring the 90th Anniversary of Vitaphone at TCM’s Classic Film Festival.

Long before the term “deadpan” described the work of Buster Keaton or Jack Benny, critics employed it in reviewing the work of the now virtually unknown comedy duo, Shaw and Lee. Pairing up on stage around 1911, the team worked together for over 40 years, first in theaters and later in radio, films, and television performing nonsense songs, verse, jokes, and dancing. Like most of vaudeville, their act can be an acquired taste; uproariously hilarious to some and painfully dull to others. While most of their fellow performers are long forgotten, Shaw and Lee live on, thanks to the magic of Vitaphone.

Like many performers, the men came from humble beginnings and little schooling to find a lifetime calling to support themselves and their families. They aped more famous actors as well by changing their names to ones that more easily fell off the tongue. Though never huge stars, they earned a living doing what they loved.

Shaw and Lee in “The Beau Brummels,” a Vitaphone short on Vimeo.

Al Shaw, the smaller of the two, was actually born Albert Schutzman in Manchester, England April 1, 1891 per both draft and census records. He immigrated to the United States in 1907, and over the years claimed his parents were Russian or Austrian. His 1918 World War I draft record lists him as 5 foot 3 inches, with blue eyes and brown hair.

His taller partner, Sam Lee, came into the world as Samuel Levy, born July 12, 1891 in Newark, New Jersey, to Russian parents. Standing 5 feet 6 1/2 inches tall, Lee, who went by the names Sam, Sammy, and Stan throughout his career, lived in the same apartment buildings as Shaw per the 1920 New York census and later World War II draft records.

Both joined the theatrical world early, with Shaw working as a program boy at the Manchester Music Hall before immigrating to America and eventually becoming a secondary part of an act for Oscar Hammerstein at his New York Victoria Theatre. Lee supposedly danced on the streets of New Jersey and New York, earning pennies from appreciative passersby. An agent spotted him one day and booked him for an engagement with a small vaudeville circuit. Both struggled to find their niche.

Different stories from the 1930s describe how Shaw and Lee met and formed their partnership. The November 14, 1933 Syracuse Herald claims that Orville Harrold, an early operetta/musical theatre performer who had attended performances featuring the two men, considered their dancing and comedic styles very similar and introduced them to each other. They hit it off, and after rehearsals at the American Theatre quickly landing bookings.

The August 3, 1930 Oakland Tribune states the men met each other in a Chicago hotel lobby though each had witnessed the other performing. Shaw and Lee began throwing jokes at each other, coming up with witty responses to volley back. A partnership was formed.

By September 27, 1911 they were performing as part of a burlesque/minstrel show traveling the Sullivan Considine Circuit, assisting Mabel Howard with singing and dancing at places like San Francisco’s Empress Theatre. The agile team demonstrated both comic interruption skits as well as skillful dance steps. Like most performers in burlesque and vaudeville, Shaw and Lee plugged away, honing their skills, timing, and routines as they slowly ascended the pecking order of acts crisscrossing the country in one night stands or short runs at large city theatres. At times of trouble, they sold their belongings or propose in order to return to New York.

Shaw and Lee in “The Beau Brummels.”

In these early years, the team focused on dancing, with the May 26, 1913 Bridgeport Farmer calling them “a classy pair of dancing boys,” with Miss
Moulton adding some feminine charm to their act. They moved up in billing as well, landing in the middle of the show as part of a special performance at New York’s Murray Hill theatre in 1914 before joining a touring company with Snitz Moore, Edna Lee, Florence Fletcher, Harvey Greene, and others.

In these shows Shaw and Lee danced and often comically sang popular tunes of the day such as “Abba Dabba Honeymoon.” By 1916 they were providing “bits of eccentricity” as part of the Bostonian Burlesquers show headlined by Frank Finney, adding what newspapers called daring novelty. One ad described their work as “novel eccentricities.” Their smooth act would often take unexpected tangents into nonsense. Shaw and Lee began shifting their act towards comedic verse and pantomime, with stone-faced looks at each other after physical routines or fall down laugh lines, increasing the hilarity.

The two men freelanced between vaudeville/burlesque circuits and the stage, sometimes performing in musical revues. In 1917 Shaw and Lee joined the cast of the Irving Berlin revue “Stop, Look, and Listen,” with the Ocala newspaper calling their dancing one of the best specialties of the show. The duo performed soft shoe dancing and introduced acts for “Hello, America” in 1918.

Shaw and Lee carefully crafted their act, evolving as tastes changed, trying to keep their material fresh for new audiences. They performed in various revues such as Joe Hurtig’s “Greenwich Village Review” and the burlesque show “Girls of the U.S.A.” at Washington D. C. ’s Gaiety Theatre in spring 1921, this time as stand alone actors. Shaw stepped into the “Jewish” comedian role for the first time filling in for a departing show actor, speaking in dialect and wearing whiskers.

By the early 1920s, Shaw and Lee began headlining shows indicating some popularity. They created a show entitled “Nature’s Gifts” and traveled across the United States with it in 1921-1922. Their fame reached high enough that Eddie Mack proclaimed in the April 21, 1922 Variety that his company manufactured their “eccentric togs” as well as their stylish street clothes. Many ads began promoting them as “The Beau Brummels” of the stage for their fancy dress. 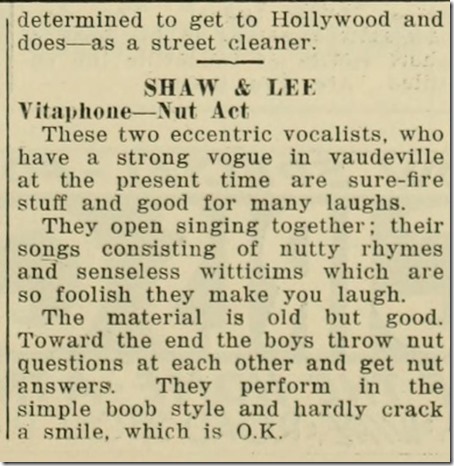 Moving pictures helped speed the decline of vaudeville, offering a more visual, up-to-date entertainment. Many theaters also featured a small prologue of burlesque or vaudeville before the show, pulling away some of the industry’s best talent. Shaw and Lee themselves headlined shows at movie palaces, including performing on a bill with Olsen and Johnson at New York’s Franklin Theatre before the 1922 Marion Davies’ film “Beauty’s Worth.”

Shaw and Lee chased experience and work to develop their talents as well as gain new fans. During the 1920s, the men appeared in such Broadway revues as Ed Wynn’s “Grab Bag” in 1925, “Five O’Clock Girl” in 1928, and “Pleasure Bound” in 1929.

During the 1920s, Warner Bros. had acquired the Vitaphone system from Western Electric, an experimental sound technology to add voice and music to silent pictures. This sound-on-disc system featured soundtracks recorded on phonograph records that would simultaneously be played with motion pictures in theatres. Warner Bros. released the film “Don Juan” in 1926 which employed Vitaphone for the recorded musical score and sound effects. As the studio moved on to “The Jazz Singer,” they also began producing film shorts of stage/theatre acts to run as part of the bill with the feature film in major movie palaces.

Warner Bros. filmed Shaw and Lee for posterity in 1928, recording their act in an eight minute short titled “Beau Brummels.” The two men perform their act on camera, standing stock still as they stoically sing nonsense tunes, performing spot-on underplayed double takes toward each other after particularly odd lines. Exhibitors Daily Review praised their performance, noting it featured their “sure-fire stuff” such as nonsense rhyming songs and foolish lyrics. The review stated “the material is old but good…they perform in the simple look style and hardly crack a smile, which is o.k.” The Los Angeles Times also praised “Beau Brummels” on January 31, 1928 when it appeared with the Conlin and Glass Vitaphone short and “Lights of New York” at the Warner Bros. Theatre.

Shaw and Lee parlayed this success into work both on stage and in motion pictures. They appeared in another Vitaphone short, “Going Places,” in 1930, and began performing small roles in films such as “You Belong to Me,” “Young and Beautiful,” “Mrs. Wiggs of the Cabbage Patch,” “King of Burlesque,” “Ready, Willing, and Able,” and “Hollywood Varieties” in 1949. Newspapers praised their performances, with the September 28, 1939 Los Angeles Times calling their spot at the Orpheum luminous. “They open with a mildly funny line of chatter, then build to a fantastically comic pantomime routine in which arms, legs and hands are entangled, and it is this stunt which rocks the house, making the customers laugh ‘till they weep.” The reviewer called Lee the genius of the two.

Bryan Foy announced that he would film a short “Boola Boola” with the duo at his Venice Boulevard Studio in 1932, with Shaw and Lee playing themselves, but it appears the film was never produced.

Eddie Conrad, left, with Al Shaw, center, and Sam Lee as street musicians in “I Live for Love,” a mystery movie from 2013.

Los Angeles motion picture palaces and theaters booked them to headline stage shows preceding films for more than a decade, sometimes calling them the “Moguls of Mirth.” Shaw and Lee performed as part of Sid Grauman’s extravaganza celebrating the 1932 Olympic Games before “Strange Interlude” at the Chinese Theatre. They entertained before movies like “If I Had a Million” at the Paramount Theatre and “Laugh-Go-Round” through the early 1940s before appearing in revues like “The Crazy Show” and “Insanities of 1945.” The team also performed in variety shows raising money for charity for such Jewish groups as the Mt. Sinai home, Temple Israel, and Bagels and Bows. They also performed at high end supper clubs like Victor Hugo’s and Charlie Foy’s Supper Club.

Unfortunately their stage and film success did not carry over to radio, perhaps because their style of performing really required visuals to put it over. Shaw and Lee landed their own radio show on WABC in New York co -starring Phil Baker and called “Going Places” in 1930, which ran Monday and Friday nights from 7:45 pm to 8 pm. The show featured nonsensical and witty humor, with the three men playing characters named after Sinclair auto products, the sponsor of the show. It lasted but a few months.

After appearing on Jack Oakie’s radio program in 1938, they landed their own Columbia Radio network show recorded in Chicago called “Double Everything” with the show aping the title: double the ads, songs, comics, including piano duets, twin performers, double lyrics. Reviews noted old style and quaint humor in its offerings, with both critics and audiences panning it. The show lasted only a few weeks.

Attendees of this year’s TCM Classic Film Festival will possibly have the chance to view them in action on the big screen for Ron Hutchinson’s special program saluting the 90th Anniversary of Vitaphone, as their photo for “The Beau Brummels” illustrates the event on the website. Shaw and Lee represent the wide and wacky world of Vitaphone Variety performers, showcasing a long lost era of popular culture that still energizes and entertains audiences to this day.