Ida Lupino promotes Easter in 1934, with the Zahn building in the background.

What was intended strictly as a publicity photo promoting young actress Ida Lupino celebrating the Easter season on a large rabbit outside Desmond’s Department Store leads to a fascinating history regarding the building seen in the background. Some buildings are remembered for their gorgeous architecture, others for the influential people that visited the structure, and some for life-changing events that occurred inside their doors. The H.N. Zahn building, still proudly standing at 5480 Wilshire Blvd., is remarkable for how its owners pushed what today is called spot zoning, a scourge on current development around Los Angeles.

Zahn’s father, Johann (J. C.) Zahn, was born in Prussia in 1822. He studied medicine and earned a fortune before immigrating to Australia and establishing a mission there, giving it to the state. After making another fortune, he and his wife immigrated to San Francisco and later came to Los Angeles, independently wealthy. He invested in real estate in California, Nevada, and Utah, and founded churches, such as the First German Methodist Episcopal Church downtown. 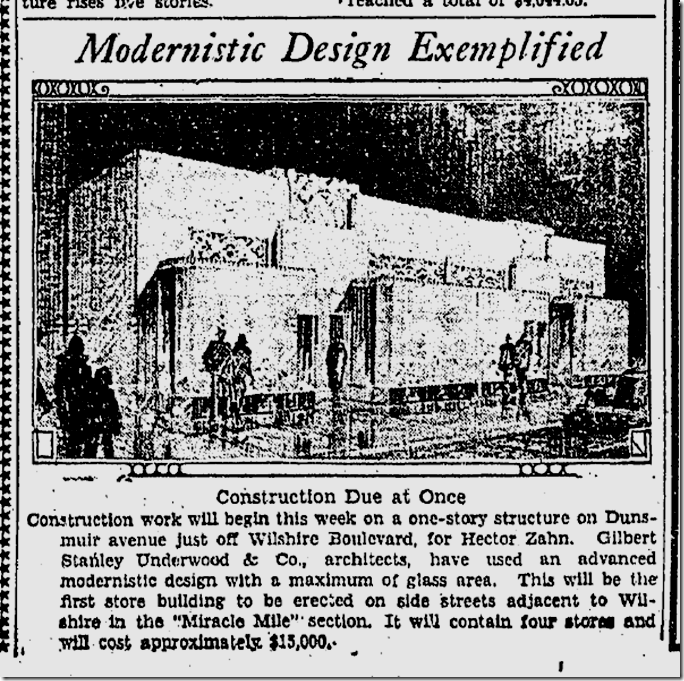 Hector Nathan, the youngest of five sons, was born August 8, 1878 on Spring Street, in what later became the site of the Title Insurance and Trust Building. He worked for the family’s corporation in various places like their mining company in Utah and Camp in Nevada over the years before beginning investing in real estate himself, in and out of the courts over various land matters over the years.

The Los Angeles Times reported on January 26, 1904, he was sued by Grant Burkett, who claimed that Zahn “alienated the affections” of his wife, asking for $25,000 from both Zahn and his mother, before asking that she be dropped from the suit. Burkett claimed Zahn took unchaperoned buggy rides with his wife, gave her gifts, and the like. Zahn stated on the record that Burkett was a “heavy drinker” and abused his wife. Hector eventually married Kathryn after the Burketts divorced and they had him arrested for perjury, claiming that he had asked for money before filing the suit, which was dropped by the courts.

Zahn began purchasing real estate around Los Angeles, including acreage along what would become Wilshire Boulevard, stretching from Cochran to Dunsmuir Avenues. At this time, grand homes lined Wilshire, a veritable “Millionaires Row,” but development was gradually overtaking residential closer to downtown.

On October 18, 1921, the Los Angeles City Council passed an ordinance creating five types of building zones, indicating what types of structures could be constructed in each zone. Zone A provided only the construction of single-family homes, Zone B allowed hotels, dwellings, apartments, Zone C proscribed only retail/wholesale establishments, Zone D allowed industries and factories, while Zone E was devoted to any lawful use. The Zahn/Ross land lay outside the boundaries of Los Angeles at this time.

The Zahn building, as shown by Google Street View.

The City Council annexed the tract in this area to the city on February 28, 1922, and amended the ordinance in September, placing most of the land in this area to Zone B, and putting land around La Brea Avenue in Zone C.

Ross and Zahn filed an application with the city to declare an exemption to their property in this tract and allow it to be zoned for commercial purposes. The Public Works Commission turned down their request, stating that “we believe that Wilshire Boulevard is destined to become a show street when widened and beautified as contemplated and the encroachment of business upon this boulevard is at this time unnecessary and would be a great detriment to the future residential development of this thoroughfare and we therefore recommend that the request be denied and filed.” The Los Angeles City Council unanimously approved their recommendation.

On July 25, 1923, the two men applied for a permit to build a one-story retail building on their property. Zahn petitioned to the City Council, requesting an exception to build his commercial structure, while A.W. Ross petitioned them to allow commercial construction along Wilshire west of La Brea Avenue. The city refused, keeping the area zoned B, a decision supported by the majority of residents in the area.

Zahn and Ross appealed to the California Supreme Court who referred the case to the Appellate Court, claiming the city’s actions were illegal in that “Its operation amounts to confiscation and taking away of property without due process of law,” per the August 23, 1923, Los Angeles Times. This was a test case regarding a city’s right to establish zoning throughout its boundaries.

The Appellate Court ruled the city’s zoning laws valid, and Ross and Zahn appealed to the State Supreme Court, which ruled for the city, per the March 28, 1925 Times, “that the zoning of its territory for building purposes is a proper exercise by the city of its police powers.” The two men requested a rehearing, denied by the Court.

Ross and Zahn appealed to the United States Supreme Court, which ruled for the city of Los Angeles May 16, 1927, stating that cities had the right to enact zoning restrictions throughout their municipalities.

Zahn tried anything to turn the districts into commercial areas, even trying to prevent Los Angeles residents from voting on the matter. On July 30, Zahn filed an injunction to prevent City Clerk Dominguez from distributing a referendum allowing citizens the right to vote on whether Wilshire Boulevard between Western Avenue and Rimpau Boulevard and Wilshire Boulevard between Detroit and Carson Avenue be converted to business districts. He, along with Fred H. Luth, felt only owners of property in these districts be allowed to vote.

After all the court wins, the city unexpectedly made a complete turnaround and meekly approved Zahn’s request, giving him an exception and allowing him to build a commercial structure on this property. By so doing, Los Angeles began practicing the policy of spot zoning, allowing exceptions for mismatched or oversize development in areas where it was forbidden often, for a price. This practice subverted and stepped around the referendum process allowing Los Angeles residents a say on matters concerning development.

On October 13, 1927, Zahn filed a building permit to construct a four-story apartment and office building 56 feet high at what the Los Angeles Department of Building and Safety called 5466-8-70-2-4-6-8-80 Wilshire Blvd. The permit estimated a cost of $80,000 to build the 36-room building in which 14 families would live.

Per the permit, brick would cover the exterior walls, the foundation would be composed of poured concrete, the roof would consist of tile and comp. The permit listed Frank M. Tyler as architect, renowned throughout the city for his elegant homes for such people as George A. Ralphs as well as the Woman’s Twentieth Century Club of Eagle Rock. Architect Tyler signed an agreement October 11, 1927, stipulating that the building would be erected at least five feet back from the property line in accordance with city policy.

When completed, Zahn’s new structure featured lovely Spanish Colonial architecture, with elegant detailing on the top floor of each section of the building, along with a decorative fan underneath the fire escape ladder. On the ground level, the Dunsmuir facade featured tile on the bottom third of the first level, with matching detailing above and around the curved and decorative windows

Over the years, however, “improvements” to the building ended up removing the elaborate decorative windows on the Dunsmuir facade, along with the destruction of the Spanish detailing on the lower floor.

Zahn ended up making a fortune on the block he owned extending from Cochran to Cloverdale along Wilshire Boulevard upon which the Bank of America now stands. The Los Angeles Times reported that he received $600,000 in cash November 17, 1929 from the Dominguez Estates Company for the entire city block, even after the crash and disaster of the New York Stock Market a couple of weeks previously. A gorgeous Art Deco building was constructed and remains to this day.

While intending to only shoot a publicity still, Paramount Pictures ended up documenting the H.N. Zahn building and its original Spanish Colonial design, preserving it for posterity. On March 22, 1934, Paramount Pictures posed young British actress Ida Lupino atop a giant decorative rabbit display promoting the Easter holiday on the Dunsmuir sidewalk side of the majestic Desmond’s Department Store. The still’s original caption states, “BIG BUNNY BUSINESS – In preparation for Easter, Ida Lupino, young Paramount player, puts finishing touches on a huge Easter rabbit designed to impart a festive holiday touch to one of the screen colony’s fashionable streets.” By this time, the street was becoming known as the “Miracle Mile” in this area of mid-Wilshire.

An ephemeral piece of advertising, a simple movie still, can often present the only documented look and design of historic buildings and places, offering us a nostalgic time capsule back into classic Los Angeles and Hollywood as well as indirectly recording a place that changed the very design of the city.