Posted on December 7, 2015 by lmharnisch

Since almost the beginning of the motion picture industry, advertising tie-ups and promotions have stoked audience interest and desire in seeing certain moving pictures and movie stars. Studios quickly learned that partnering with another company or popular product cut the costs of advertising and promotion, as well as created huge audience awareness of their upcoming features. Stars often engaged in production promotion to gain financial rewards as well as to increase their popularity and name recognition with the public. If the studios or stars owned all or part of the tie-ups even better, as they earned huge profits on consumer spending for these items. As Moving Picture World described it in a June 28, 1919, the aim was not only to sell movies to exhibitors, but “to sell pictures to the public.”

In the early 1920s, Paramount Pictures joined in partnership with a novelty company for a special series of tins promoting several of the studios’ stars, in a bid to goose their actors’ popularity at the same time as the exploitation reminded the public of the studio’s development of attractive, vibrant motion picture personalities. 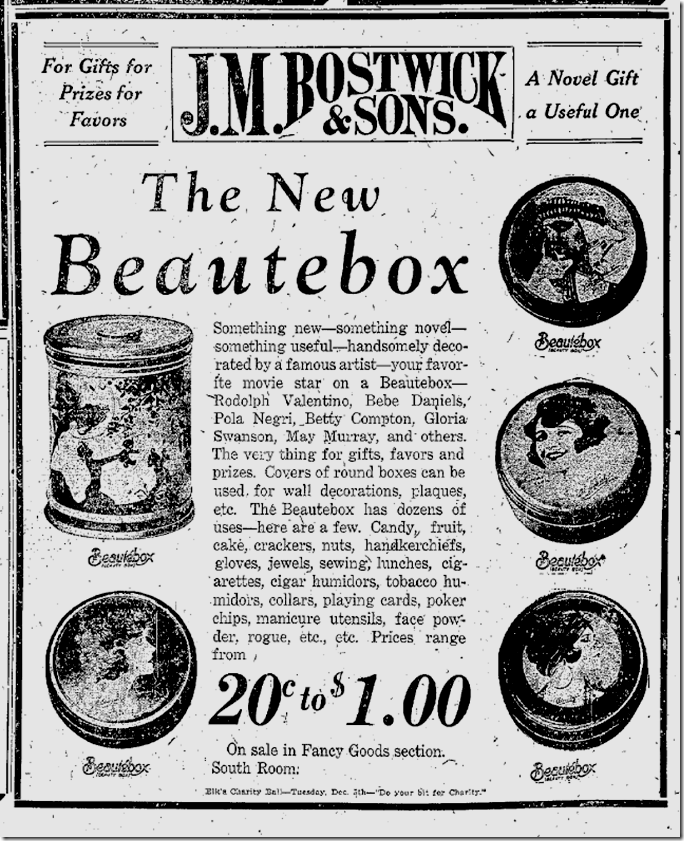 The Beautebox, advertised in the Janesville Daily Gazette, Nov. 21, 1922.

Motion Picture News announced in the August 20, 1921 issue that the studio had signed renowned illustrator/actor Henry Clive to an exclusive one-year contract to design poster key art. The deal evolved out of his lavish portraits of the stars of Cecil B. DeMille’s “The Affairs of Anatol,” converted into three-sheet personality posters promoting the film.

Building on this idea, they paired with Beautebox to devise products to sell to the moviegoing public, all handsomely illustrated by the talented Clive in what the December 9, 1922 Exhibitors’ Herald called a “permanent advertisement for Paramount Pictures.” Metal tins with black enamel finish of differing sizes and shapes featured gorgeous likenesses of Paramount stars Wallace Reid, Gloria Swanson, Rudolph Valentino, Betty Compson, Pola Negri, Bebe Daniels, and Mae Murray, intended as keepsake boxes and souvenirs.

Tom Kennedy in the November 25, 1922 Exhibitors Herald stated, “Painted by Henry Clive, they are a handsome lot of novelties and look expensive. Whether they are expensive or not worries us little. What we marvel at is the enterprise and aggressiveness of these motion picture advertising people.” 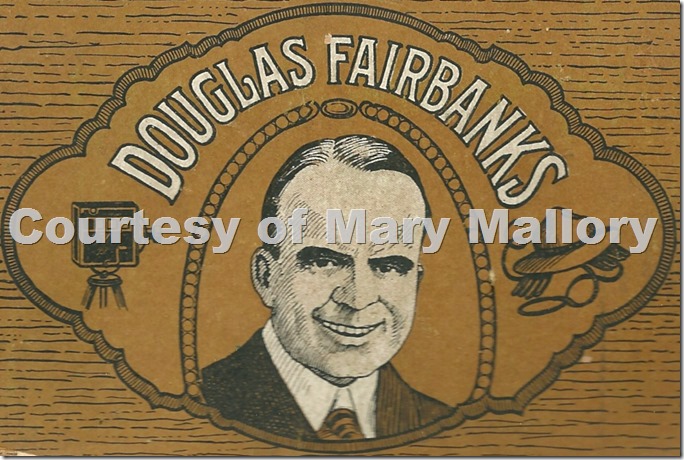 Just in time for Christmas gifts, newspaper ads began appearing across the country promoting the special containers, calling them both novel gifts as well as useful. An ad in the November 21, 1922 Janesville Daily Gazette called it “The very thing for gifts, favors and prizes. Covers or round boxes can be used for wall decorations, plaques, etc.” The empty tins could also be employed for a variety of uses, including holding gloves, handkerchiefs, jewelry, crackers, fruit, candy, nuts, sewing, cigarettes, makeup, playing cards, poker chips, and sewing equipment. The luxurious looking tins ranged in price from twenty cents to one dollar.

Exhibitors Trade Review reported that a new process allowed a lithographic image of a star to be adhered permanently under the cover’s surface. These lovely gifts allowed exhibitors to arrange cooperative window advertising with department and novelty stores, often providing free tickets for each tin purchased. Many exhibitors and newspapers listed them as collectibles, suggesting fans collect the images of their favorite pin-ups. At the same time the tins promoted stars, they also increased moviegoing.

Stars also joined in the publicity and promotion craze as a way to deepen their ties with moviegoing audiences and to profit off their soaring popularity. As author Tracey Goessel points out in her new biography, “Douglas Fairbanks, the First King of Hollywood,” movie superstars like Mary Pickford, Charlie Chaplin, and Fairbanks earned big bucks for licensing their names and likenesses for a variety of products.

The Beautebox in Exhibitors Trade Review.

A Douglas Fairbanks cigar was introduced in 1919, a cheaply priced one to appeal to mass audiences. It quickly became a hit with consumers, hoping that smoking a Fairbanks’ cigar would lend them the joie de vivre and success of the attractive Fairbanks. The Retail Tobacconist stated on April 20, 1922 that Irving Wertheim, a representative of the Clarence S. Gable Manufacturing Company of York, Pennsylvania, would promote the “nickel cigar of demonstrated quality.”

As the May 18, 1922 Tobacco Illustrated Weekly reported in a short blurb that “an implied guarantee goes with each cigar to the effect that once the smoker and the cigar meet, they become lasting friends and the smoker inherits that world known smile of the movie king, whose name they bear.”

Douglas Fairbanks’ cigars remained popular for years, with ads still promoting them in the late 1920s and early 1930s.

Even today one can acquire their own Fairbanks’ cigar boxes or Canco Beauteboxes as special holiday gifts, all thanks to the diverse auctions of eBay, Bidstart, or Etsy. What were originally items intended as affordable purchases linking consumers with their favorite stars now stand as unique collectibles demonstrating how little has actually changed in the entertainment industry.