Teddy the dog with a Mack Sennett bathing beauty, courtesy of Mary Mallory.

Guide, guard, and constant companion, the friendly dog is man’s best friend. Unswervingly loyal and supportive, canines give much needed love and help when times are tough. Their sloppy kisses and wiggly tails bring oodles of smiles and a kick in the step to their human pals.

This same boundless energy and enthusiasm has also entranced decades of film fans at local movie palaces, where they have been entertained by portrayals of dogs’ friendly personalities and mischievous quirks. Natural hams, dogs easily upstage their fellow two-legged actors through their unpredictability and high spirits.

In early primitive films, stray dogs excited by the action sometimes unexpectedly joined the scene. Later on, heroes and likable characters were given friendly dogs as companions while villains often sported vicious curs.

In 1916, however, Mack Sennett introduced an easygoing, 42” tall, 145-pound Great Dane named Teddy to moviegoing audiences, who soon took him to their hearts. Shy and talented, the oversized lug dwarfed many of his cinematic co-stars as he performed astounding tricks on the silver screen. Teddy, “the dog with the human brain,” soon stood as one of the most famous dogs in America, besides leading the pack as the most popular dog star.

Teddy perhaps gained his start in vaudeville, as the trades note a “Teddy the athletic dog” as appearing on the Keith circuit in 1914, and the American Film Manufacturing Company featured a Teddy the dog in a 1916 short. However he came to the attention of comedy king Mack Sennett, Teddy the gentle giant appeared in his first Keystone short, “The Nick of Time Baby,” a 1916 one-reeler starring the romantic comedy duo Bobby Vernon and Gloria Swanson. A star was born.

So popular was the dog that his name was incorporated into the second short in which he appeared with Swanson and Vernon, “Teddy at the Throttle (1917),” an honor previously reserved for such human Sennett stars as Mabel Normand, Arbuckle, and a few others. Sennett biographer Brent Walker reports that over $17,000 was spent on the melodrama spoof, in which Teddy saves the day. With Swanson tied to railroad tracks, hero Teddy chases and jumps aboard the moving train, where he catches the brake lever between his jaws, yanking the engine to a stop as engineers look on. The train continues forward, rolling over Swanson, who in the nick of time finds a hole in the tracks and pulls herself to safety.

Teddy once again stole the show in “A Dog Catcher’s Love,” with the Variety critic calling Teddy’s work “wonderfully interesting…,” noting that “this canine performer does many things better than some human beings.”

In 1918, Teddy posed for photographs for a Photoplay photo essay starring Charles Murray and a baby, showing him pulling a baby carriage and guarding a baby. Another feature by Grace Kingsley mentioned that Teddy earned $50 a week and paid $25 in taxes that year, with his master Joe Simkins also providing him six soup bones a week ager a weekly flea dip and examination. The article stated that besides performing stunts, Teddy could sing along as Joe played his accordion.
By that November, Photo Play Journal claimed that dogs were some of the best actors in movies, led by the amazing Teddy. His success onscreen led to Great Danes’ popularity with animal lovers in 1918, as magazines mention the public’s growing interest in the breed. By 1920, Teddy becomes one of the most popular pet names in the country.

Besides appearing with Vernon and Swanson, Teddy began co-starring with such knockabout comedians as Louise Fazenda, Charlie Murray, Wayland Trask, Polly Moran, Slim Summerville, and Ben Turpin, chasing the Sennett cat Pepper and adding to the comic shenanigans. In the 1917 film, “Are Waitresses Safe?”, Teddy steals a chain of link sausages and scampers around the diner chased by all involved.

The Keystone dog also starred with Sennett bathing beauties in several shorts, offering filmgoers both a chance to ogle and laugh at goings-on. “Those Athletic Girls” in 1918 featured janitress Fazenda attempting to keep her husband Frank Cooper away from the skimpily clad girls. “His Smothered Love” showcased streetcar conductor Chester Conklin attempting to poison Marie Prevost at her beachside honeymoon after she married someone else.

During the filming of the latter movie, Motion Picture Magazine reported that Teddy proved a hero when Prevost found herself swept off a rock by a giant wave. After seeing her head bob up, Teddy fought his way through the pounding surf and caught her bathing dress in his mouth, pulling her to shore.

Besides serving as a hero, the lovable pooch also promoted the war effort, appearing with Sennett stars at war bond sales where he greeted crowds.

In 1920, Teddy played a large role in the Keystone feature, “Down on the Farm,” starring Sennett regulars Fazenda, Turpin, Prevost, James Finlayson, Bert Roach, and Harry Gribbon in a rural tale of conflicted love and finance. Productive Teddy is shown hard at work among a menagerie of animals, before eventually saving tiny John Henry Jr. (Don Davis) from a raging river. 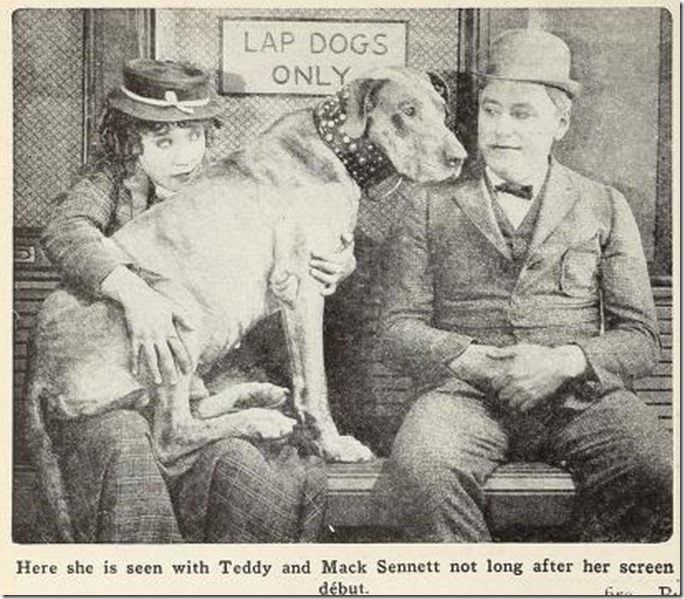 Recognizing a potent comic duo, Sennett paired the little boy and dog in a series of filmic adventures in which they caused all manner of mischief and amazement. The two side by side made a perfect sight gag, with the tiny tot dwarfed by the humongous dog. In their film, “It’s a Boy,” Teddy builds a step of boxes for wee John Henry to get off a high shelf, draws him in a small chariot, and once again rescues him from water, per the September 12, 1920 Wid’s Daily.

The Los Angeles downtown Bullock’s recognized Teddy’s popularity, bringing him in for a special stunt appearance in their children’s department/toy store in 1920. The Dry Goods Economist reported that “one Saturday brought “Teddy the Dog,” a prominent star in moving picture life…the big dog that does all the rescue work in hair-raising films… This dog is an immense creature, and one of the Mack Sennett attractions. The fact that the dog would be there that Saturday was advertised extensively and literally hundreds of children came to see him. He was trained in so many stunts and he showed off to good advantage during the entire afternoon. Each child was given a photo of the dog.”

Teddy also appeared in person at the Los Angeles’ Pantages Theatre the week of January 19, 1921, putting on an outstanding show. The Los Angeles Times reported that he was awakened by an alarm clock before getting his own breakfast, mopping the kitchen floor, and tending to the baby.

Teddy’s popularity extended to other companies who hired him for occasional appearances. He emoted with Mary Pickford in the Artcraft film “Stella Maris” in 1918. The pooch acted in Century Comedies 1921 short “A Family Affair,” and starred with child star Baby Peggy in “Get Rich Quick Peggy” and “Teddy’s Goat” that year as well. The “Sennett Wonder Dog” appeared in director Marshall Neilan’s first Goldwyn film, “The Stranger’s Banquet” in 1922 with Ford Sterling and Hobart Bosworth, and co-starred with young Jackie Coogan in “A Boy in Flanders” in 1924, while also continuing to appear in Sennett films. He also supposedly romped in one of Fazenda’s first films, “Love Eggs,” at First National, also starring John Henry Jr. and Chester Conklin.

Public letters to Sennett begged for more Teddy filmic appearances. To satisfy cravings, the company created the one reel “Behind the Scenes at the Mack Sennett Studio,” in which Teddy, Pepper the cat, a goat, bear, and various other animals appeared along with bathing beauties like Prevost and Haver, as they clowned around in the studio’s still department. Of course, more comic shorts containing the lovable antics of the cute canine also were produced.

By 1923, however, Teddy began slowing down. He sired a son, Teddy Jr., that year, as he began slowly ending his career. At the ripe old dog’s age of 14, the sweet boy passed away at owner Simkins’ Hollywood home in 1925.

Many of his Sennett films remained comic hits over the decades and were saved in various compilations, available for viewing by today’s audiences. Teddy’s hi-jinks led the way for later major canine stars such as Rin Tin Tin, Asta, Lassie, Benji, and Uggie, proving that dogs remain a hit whenever they appear in moving pictures.