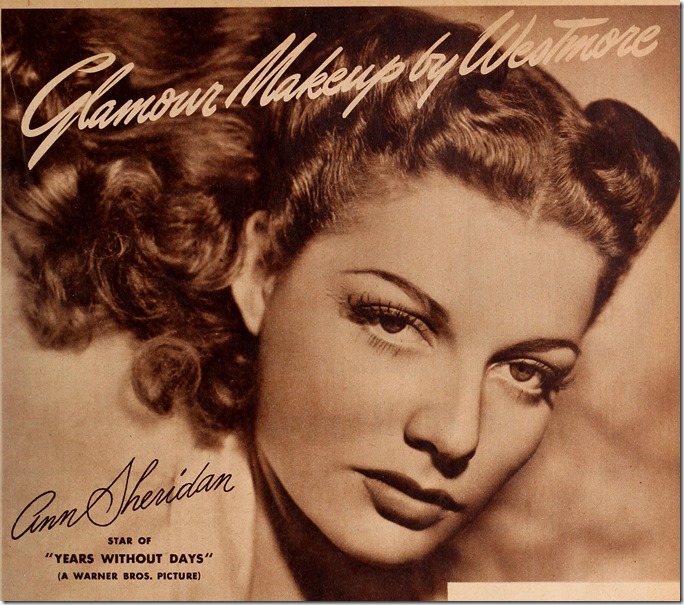 Since the 1920s, the Westmore family has served the entertainment industry as some of the greatest practitioners of makeup artistry. From leading studio makeup departments to creating unique makeup effects, the Westmores have excelled at promoting and publicizing the art of beautification, often blazing new trails in the process. In fact, they were the first active entertainment industry professionals to open a successful salon on the side serving both their studio clientele and the general public, known as the House of Westmore.

Patriarch George Westmore introduced the family to the beauty field back in England, getting his start at as an assistant to a barber, lathering and shaving clients, and as apprentice hair-dresser. From an early age, he drummed into his sons the importance of soap and simple things when it came to beautification. Percival “Perc” Westmore claimed in his book, “The How-To Beauty Guide For 1950s Woman,” that their father told them every night, “The beginning of facial loveliness is in a bar of pure mild soap and a jar of cleansing cream.” Makeup artists and hairstylists nicknamed their annual awards, the Georgie Awards, after George Westmore, in honor of his pioneering work.

Westmore became a successful wigmaker, before moving the family to New Orleans and eventually to Los Angeles. Once in the city of Angels, Westmore established the first film makeup and hair department at Selig Studios on Edendale Boulevard in 1917. He would go on to apply makeup for Nita Naldi and Rudolph Valentino and help develop Mary Pickford’s sausage curls, all per Perc’s “How-To Beauty Guide.”

His six sons (Montague or “Mont,” Perc and his twin Ernest Henry “Ern,” Walter or “Wally,” George Hamilton or “Bud,” and Frank) followed him into the hair and makeup business, with a Westmore heading every studio Hair and Makeup Department at some time, except for MGM and Columbia.

Perc joined First National in 1923, which merged with Warner Bros. in 1926. He eventually headed the makeup department, working under a personal contract to Jack L. Warner. Mont performed makeup work on “The Sheik” with Valentino in 1921, serving as Valentino’s personal makeup man until the star’s tragic death five years later. He began freelancing, working on Cecil B. DeMille’s “The King of Kings,” “The House of Rothschild,” and others, before heading Selznick International Picture’s makeup department during the making of “Gone With the Wind.” Ern promoted himself with his brother Perc in 1924 newspaper ads, calling themselves the “Westmore Twins,” going on to work for Warner Bros. and RKO Studios and later leading Twentieth Century-Fox’s makeup department.

Wally helped create the dazzling effect of Fredric March morphing into Mr. Hyde for the 1931 film, “Dr. Jekyll and Mr. Hyde,” before serving as head of Paramount’s makeup and hair department. Bud worked at Warner Bros. after high school, eventually leading Universal-International’s makeup and hair department. Youngest brother Frank apprenticed with Wally at Paramount before heading off on his own, working as a Director of Makeup for many independent film productions.

Ambitious and extremely talented, Perc and Ern worked freelance as a sideline to their studio jobs, serving six years as co-directors of Factor’s Hair and Wig Department and developing the “Percern” wig, which earned them $50,000 per year, according to the book, “The Westmores of Hollywood.” Perc soon realized that the family could earn more money working on their own rather than creating products for a major competitor, leading to the creation of the House of Westmore. Mont’s wife suggested the name while he was working on the film, “The House of Rothschild.” Thus was born one of the most potent competitors to Max Factor and his dominion over Hollywood cosmetics.

A Westmore ad features Bette Davis being made up for “Elizabeth and Essex.”

The Westmores acquired a lovely building at 6638 Sunset Blvd. to adapt into a luxurious salon. Raising the money among the family to complete the project was a bit of a problem, however, as gambling, spending, divorces, and alcohol issues among the members led to a financial shortfall.

Short of cash, Perc sold property in Beverly Hills to W. C. Fields for $40,000, and Ern supposedly borrowed money from Errol Flynn and John Barrymore, two of his drinking buddies, per “The Westmores of Hollywood.” While working on a film with Kay Francis, Perc noted they were still short of cash. Francis pulled out her checkbook and signed a check, telling him to write in whatever amount was required to finish the job, with one source claiming $10,000 and another suggesting $25,000.

The lavishly decorated salon finally opened April 16, 1935 with hundreds in attendance, including many of the Hollywood hoi polloi served by the brothers, such as actresses as Claudette Colbert, Marlene Dietrich, Joan Blondell, Kay Francis, Bette Davis, and Jeanette MacDonald. Golden doors decorated with the Westmore coat of arms welcomed all who entered the pleasure palace, leading to a luscious art deco foyer. Floor to ceiling mirrors and peach blush carpets filled the structure, along with white silk drapes and white, bronze, and coral color furniture. White and gold telephones occupied each cubicle. The salon offered babysitters as a special amenity. The whimsical children’s department featured fairy tale scene murals painted in pastels on the the coral and white walls. Instead of chairs, the little tykes sat in hobby horses and airplanes, with plenty of hot chocolate available to quench their thirst. Besides serving men, women, and children, the firm also manufactured wigs. Male clients mostly snuck up the back stairway to avoid detection.

A May 2, 1935 ad in Variety noted their prices. A haircut cost seventy five cents, a manicure seventy five cents and up, dye $4.50 and up, bleach $2 and up, a permanent set totaled $7.50 and up, and electrolysis cost $6 an hour. Besides their celebrity clientele, who came for the brothers’ expertise and privacy from prying eyes, the House of Westmore also served Los Angeles’ ruling elite.

Quickly copying the advertising strategies of fellow competitors Max Factor and Elizabeth Arden, the family established Westmore’s News Service in their beauty establishment, which mailed out press releases noting Westmore beauty suggestions to syndicated newspaper columns and radio programs, highlighting special products created by the brothers, and announcing special honors and appearances. As Liz Willis-Tropea points out in her book, “Hollywood Glamour: Sex, Power and Photography 1925-1939,” the brothers were merely emulating the advertising practices of the studios and the fashion industry.

As the Los Angeles Post Record wrote in a July 5, 1935 column, “Now the cosmetics market is engaged in a great civil war, conceived in a competition and dedicated to the proposition that all beauty is created by cold cream. The three peers are the House of Westmore, Elizabeth Arden, and Max Factor. Hollywood is their inspiration, but their profit is in the world outside where it’s news when a star admits how she got that beauty look… .”

The Westmores established their own cosmetics plant at Sunset Boulevard and Gordon Street and began selling products in the fall of 1935, the true cash cow of any beauty establishment. Their products, such as powder base, rouge, lipstick, and eye makeup for each type of complexion, featured gold, black, and green colors in its packaging and design. House of Westmore cosmetics cost twenty five cents at variety stores and large economy sizes cost fifty cents at drug stores. Once again aping typical advertising practices, the House of Westmore ads implied that applying the same makeup as that employed by stars would give consumers an added beauty and glamour boost. These ads noted their “easy to apply” makeups gave a “natural” appearance to those using them.

To assist with sales, the company created Gold-Books, gold foil-lined pamphlets with photographs demonstrating how to apply their products for each main hair color. They deployed professional cosmeticians to travel around the country to department stores and drug stores providing free demonstrations of the product. The establishment also signed non-exclusive pacts with studios like Warner Bros., Fox, and Paramount, allowing them to employ the names and likenesses of stars on a non-exclusive basis. Such stars as Ann Sheridan, Mary Pickford, Bette Davis, Olivia DeHavilland, Kay Francis, and Barbara Stanwyck would eventually appear in their ads.

Olivia de Havilland is featured in an ad for the House of Westmore.

The Westmores understood the Hollywood game of synergy and working your connections, employing their links to studios and top stars to help cross promote each other.

In their Gold-Books and Perc Westmore’s Perfect Make-Up Guides,” the family branded themselves with the quote, “The Westmore salon in Hollywood is the most famous of its kind in the world.”

The House of Westmore survived several upheavals in their early years. The 1937 painters’ strike with IATSE fighting to take over leadership of makeup and hair workers, threatened their salon, as all the brothers served in management positions and thus refused to strike. Three intruders broke into the premises, smearing creosote over the walls, drapes, furniture, supplies, and cubicles, costing tens of thousands of dollars to clean and repair, and shutting the firm for three weeks. Ern sold his shares of the firm to Max Factor, and Factor also acquired the wig manufacturing and rental business. Financial issues almost torpedoed the firm, but the hiring of S. Willard Isaacs, former owner of a local beauty shop chain, as business manager righted accounts.

Lining up tie-ups with studios, the House of Westmore sent out window displays, counter cards, ads, and even a life-size display of Betty Grable for such films as “Lydia,” “The Desert Song,” “Since You Went Away,” “Elizabeth and Essex,” “On Your Toes,” “Kiss the Boys, “My Favorite Blonde,” “My Reputation,” “Shadow of a Woman,” and “Coney Island.” The ads promoted their products and salon in conjunction with providing synergy and free publicity for the studios, with the basic message that every woman could look like a star.

With the advent of television, the salon provided free beauty analysis and makeup to the winning contestants of such shows as Art Linkletter’s “House Party” and “Queen for a Day.”

The House of Westmore even created cosmetics to tie-in with films. They released “Danger Signal” lipstick in conjunction with the Zachary Scott/Faye Emerson film of the same name, per Showman’s Trade Review’s September 15, 1945 issue.

In order to help spread the House of Westmore name and skill, the brothers published various Beauty Guides. Besides Perc’s early Beauty Guides, Ern and Bud wrote “Beauty, Glamour, and Personality” in 1947, Ern compiled a 1951 “Secrets of Beauty” pamphlet, and the whole family contributed to “A Complete 1950s Guide to Vintage Make Up, Hairstyle,” and Beauty Techniques,” or the “Westmore Beauty Book.” The book compiled all the special makeup tricks developed by Perc over the years, such as seven basic face shapes, coloring chart, and the like, serving as a one shop grooming and exercise book for the 1950s woman. Each brother wrote chapters that covered such topics as “Hollywood and You,” “Illusion,” “Secret Magic of Makeup – Be Subtle,” “Figure – Posture,” “and “Exercises.” The book contained how-to photos of applying makeup, solving skin problems, creating hairstyles, and exercises.

Attendance sagged in the 1950s as more competition entered the scene, women moved further west, and the brothers grew older. By the 1960s, the disintegrating neighborhood and dilapidated building led to the House of Westmore’s demise on August 10, 1965.

Though gone in spirit, the lovely building still survives, providing nostalgic glimpses at a glamorous Hollywood past that now only exists in classic 1930s and 1940s films or vintage photographs.