The parents of Marine veteran J.P. Thomas Jr. sue Mayor Fletcher Bowron, Police Chief Clemence C.B. Horrall and other city officials, charging that their son died after being beaten in jail by police.

The Times reported that Thomas, who was medically discharged after 3 1/2 years in the Marines, was hit by a car in San Pedro. The parents charged that police assumed he was drunk and took him to a hospital, where he was treated for head injuries. Booked into jail as a draft evader for not having his draft papers, he was beaten, the lawsuit said. Thomas was finally released to his mother and taken home, where he died hours later.

Police are seeking Mrs. Eleanor Rostosky, who was charged with abandoning her three children at a Los Angeles movie theater. The Times said Rostosky arrived from Pennsylvania, registered at a Main Street hotel and left Andy, 10, Gilbert, 8, and Ginger, 6, at an all-night movie theater on Main.

“Once before in Pennsylvania she left us in a show and was gone a week,” one of the children said.

Edwin Schallert says to ignore the rumors about Cary Grant starring in “Lost Weekend.” The part is going to Ray Milland. Billy Wilder and Charles Brackett are discussing Katharine Hepburn as the female lead, Schallert says. 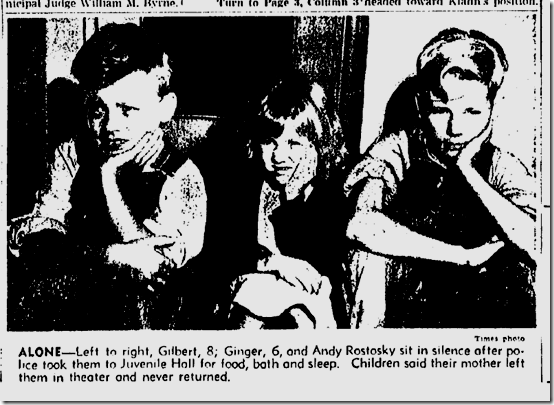