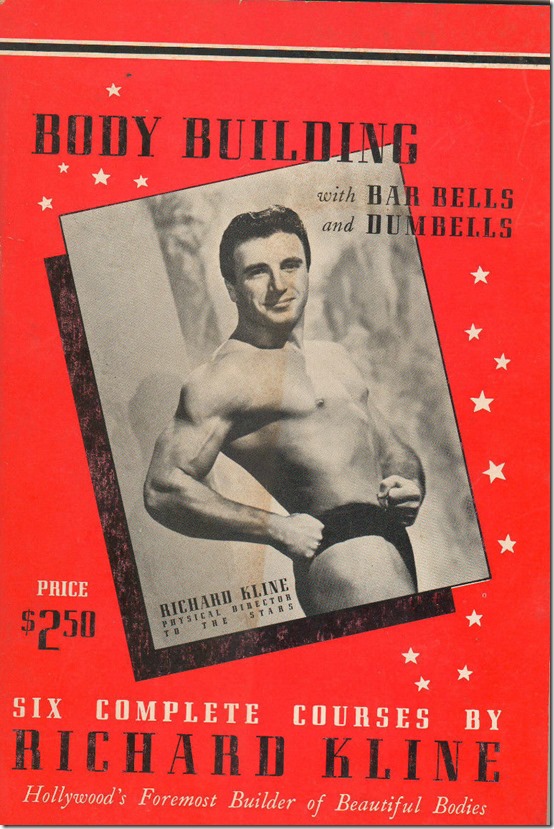 “Body Building With Bar Bells and Dumbbells” by Richard Kline, listed on EBay as Buy It Now for $29.99.

Long before the advent of personal trainers, workout gyms, weight lifting and cross-training, some movie stars worked out to get in shape, stay slim and trim, or to be prepared for active roles. Action hero Douglas Fairbanks exercised multiple hours a day, sculpting his body into a fine physical specimen capable of handling complicated stunts. Others worked to maintain slim figures.

Richard Kline, the first physical instructor and manager of the Paramount Studios gym, in what is now the Hollywood Heritage Museum, developed exercises to focus on problem areas of the body as well as created exercise routines to “streamline the stars,” as the Los Angeles Times called it. He could in effect be called the first personal trainer for the entertainment industry.

Note: To highlight the Lasky-DeMille and “The Squaw Man” Centennial, the Hollywood Chamber of Commerce is hosting a celebration Tuesday, July 1 from 5 p.m. to  8 p.m. in the parking lot outside the Hollywood Heritage Museum, featuring beer and wine, ice cream photo stations, vintage cars, face painters, games, horses and a fire engine. Tickets cost $10. Parking is available entering from Odin Street. Marc Wanamaker and I will be giving a presentation in the barn on the building and filmmakers’ history.

Per Picture-Goer magazine, Kline was born in Maine in 1906, and as a young man, the strong Kline could lift any two boys his size. Lying about his age and joining the Marines at 14, he studied physical culture and calisthenics. Upon discharge, Kline joined the Chautauqua Circuit, acting as a strongman before landing in Atlantic City. In 1925, he sold city officials on teaching physical exercises to giant classes on Atlantic City beaches. Kline was discovered by a Paramount executive acting as a strongman on the vaudeville circuit and brought him west to manage the studio gym, “the famous Lasky barn, where Jesse Lasky produced, and Cecil B. DeMille directed, “The Squaw Man.” 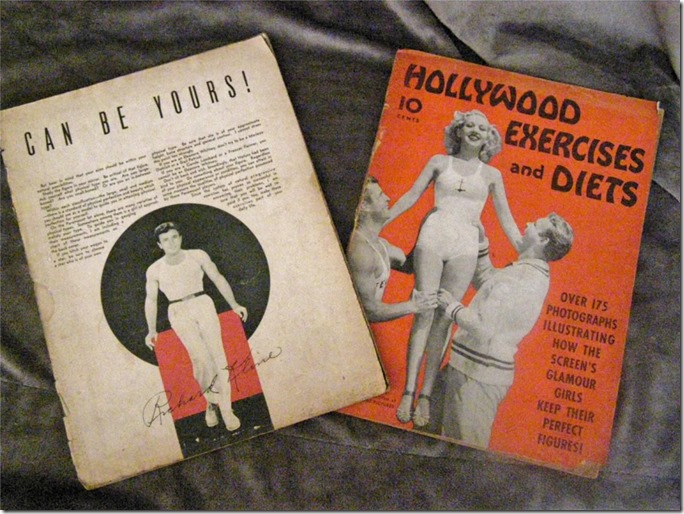 “Hollywood Exercises and Diets” and a Richard Kline magazine listed on EBay as Buy It Now for $8.99.

Kline was hired to make movie stars “look like what they ain’t,” per a Sept. 22, 1940, article in the Los Angeles Times. 5 feet 11 inches of solid muscle, the 190-pound Kline devised exercises and trained such stars as George Bancroft, Poli Negri, Richard Dix, Clara Bow, Fred MacMurray, Randolph Scott and Gary Cooper. In fact, Kline considered Cooper one of his better pupils, and described him as unaffected, good natured and serious.

As Kline told “Picture-Goer,” “Hollywood’s modern stars exercise so that they may not only have streamlined figures, but also to develop the qualities of glamour, rhythm of movement and vibrant good health. …Many men and women in the forties, or even the fifties, would be considered in the prime of life if they would only exercise properly and consistently.”

In the early 1930s, Modern Screen ran a series of articles in which Kline devised exercises to tone certain areas of the body, demonstrated by Paramount starlets like Lupino and Grace Bradley. Kline organized these into a flashy color booklet called “The Hollywood Way to a Beautiful Body” and sold by Dell Publishing (publisher of Modern Screen) in 1937.

Kline parlayed his success exercising stars into developing exercise equipment, classes and routines for ordinary men and women. In 1937, he hosted his own five days a week 15-minute exercise program on KNX, developing a brand around his success training movie stars.

He took out ads in the Los Angeles Times starting in January 1940 promoting his Richard Kline Health-Ways,Inc. at 5750 Hollywood Blvd., his own gym, where people could learn exercises and schedule massages and treatments. The building featured gym, rhythmic exercises, handball, badminton and colonic irrigation. For a special price of $15, down from the regular price of $40, customers could schedule personal appointments for sessions and schedule such treatments as alcohol baths, reducing massages, rock steam baths and salt glows.

Broadcasting magazine stated in an April 15, 1940, article that Owl Drug Co., based in San Francisco, had booked a 15-minute, five days a week, early morning program called “Keeping Fit in Hollywood” on KNX for 52 weeks, with Kline leading the exercises.

Owl Drug Co. staged a two-day rally April 25 and 26, 1940, in the KNX studios to stimulate employee interest in the show, with pep talks from executives and Kline presenting a typical “broadcast,” with employees following his lead and performing the exercises. The show appears to have lasted only a short time, as stories and ads stop in a couple of months. 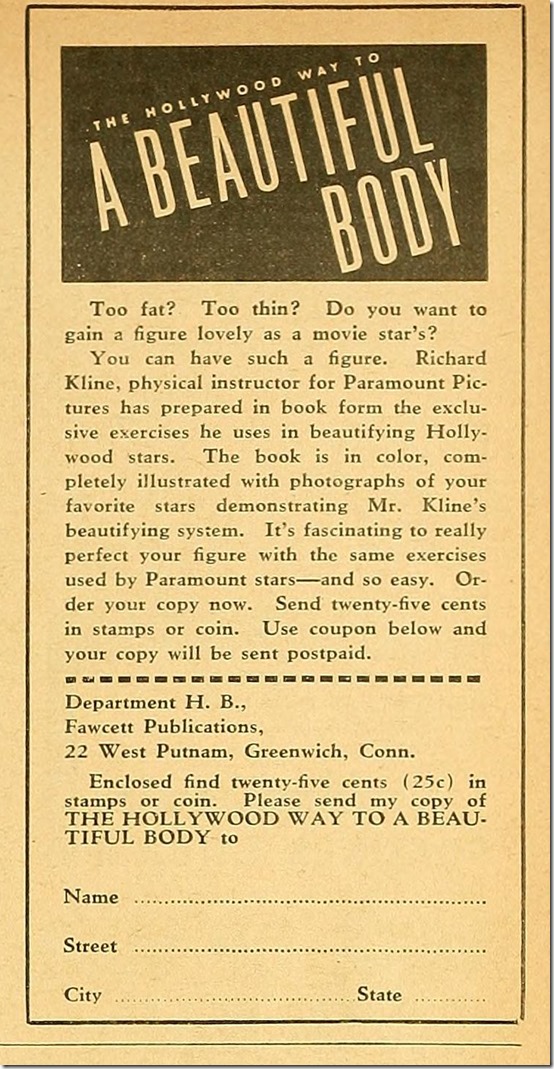 Kline developed hand-grips and barbell/dumbbell sets that could be purchased to assist with reducing and exercising. To augment this equipment, he wrote and published booklets published by Healthways on Seventh Ave. in Los Angeles, giving health and exercise advice, as well as demonstrating the correct way to perform the exercises. These brochures listed the benefits of exercise like better health, increased circulation and greater strength, along with the benefits of better eating habits and rest. The No. 1 way to succeed as Kline put it, was “NEVER MISS AN EXERCISE PERIOD.” Most of his advice is spot-on, from the length of time to exercise, consistency, discipline, simplicity, etc.

He developed a booklet for women as well, called “Contouring the Bust…Glamourizing the Figure,” in which barbells were employed as resistance to help shape and condition a certain area of anatomy, or for men and children needing moderate adjustments. The exercises “are highly recommended for those who may only want to gradually stimulate the circulation of the blood, nervous system, and internal organs for better health, and can also be used under doctor’s supervision b those who are convalescing from illness or injury. Many women have found them particularly beneficial after childbirth in regaining strength, toning up stretched muscles, and reestablishing their normal figures.” “IMPORTANT: REMEMBER, RESULTS CANNOT BE OBTAINED OVERNIGHT! ONLY PATIENCE AND DETERMINATION WILL HELP YOU ACHIEVE YOUR GOAL.”

For those more interested in visual matters, the booklet contained photographs of actresses and women in leotards performing the exercises, along with somewhat suggestive illustrations of nude women preening and stretching.

When he began these extracurricular activities in 1940, Kline left Paramount’s employ. Ads disappear from the Los Angeles Times in 1941 promoting his products, and he seems to have disappeared, or changed professions. The Paramount gym continued in operation for decades under new director Orlando Perry and masseur Jim Davies, until shutting down in 1979.