Accommodations also experienced a dramatic shift. The relaxing, quaint Hollywood Hotel gave way to the modern, up-to-date Christie, Hollywood Plaza and Knickerbocker hotels. In 1927, the stylish Roosevelt Hotel opened, this time as a central gateway to the entertainment district surrounding it. It served as the ultimate Hollywood party location.

The TCM Classic Film Festival at the Hollywood Roosevelt Hotel. 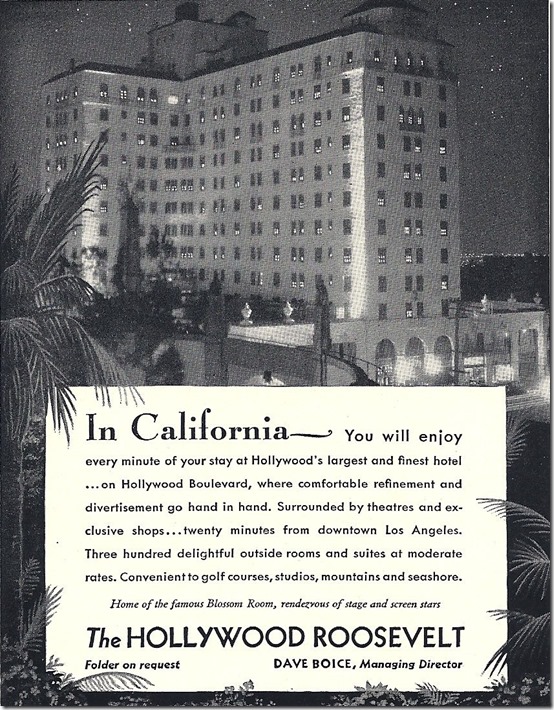 Movie moguls and stars earned huge sums of cash in the 1920s, looking for various ways to invest these riches. Many jumped into the booming real estate market, buying properties all around the Los Angeles metropolitan area. Skyrocketing population growth in Hollywood, thanks to film production, opened many lucrative opportunities to those with available cash. 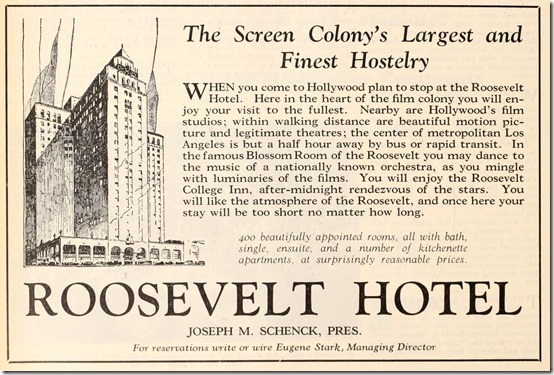 Variety reported on May 20, 1925, that “Sid Grauman and Joseph M. Schenck had purchased from Sims and Zidell ground on a corner in Hollywood for $90,000. The ground has been purchased, it is stated, strictly for speculative purposes.” Both men were already collaborating on United Artists Theatres, which the company constructed and where Grauman managed and supervised the theatrical presentations. Appropriately enough, the newly acquired piece of property, the former Mary Moll House, stood diagonally across the street from where Grauman intended to erect a spectacular theater.

On Nov. 3, Variety stated that Schenck and his Hotel Holding Co. syndicate intended to build a 400-room hotel at the corner of Hollywood Boulevard and Orange Drive costing $2.5 million. “It will be of Spanish architecture and will be on a site 160 feet by feet.” The syndicate, composed of people such as Schenck, Grauman, Mayer, Toberman, Pickford, Fairbanks, Lou Anger, Marcus Loew and Niblo, signed Hugh A. Beatson, formerly of the Pike’s Peak Hotel, to a 30-year lease to manage the property. Thirty-six apartments would be leased to stars as a sort of condominium within the complex. Conveniently, construction would begin at the same time as Grauman’s theater across the street. 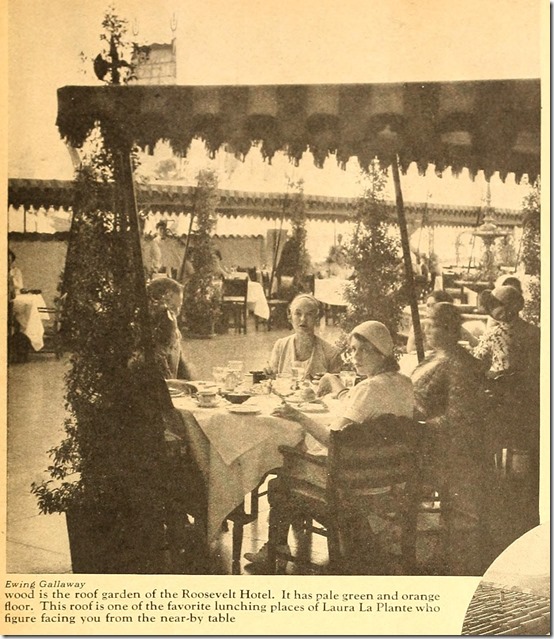 On Oct. 25, 1925, the Los Angeles Times announced the company’s plans for the spectacular new hotel. H. B. Traver of Fisher, Lake and Traver, was hired to design the 12-story reinforced concrete, Spanish Colonial Revival hotel, featuring art-stone treatment on the first floor and a textured stucco finish above, Spanish tile roof and color effects. The lavish interior would include stone walls, marble floors, Spanish stairways, and a fireplace and fountain in the lobby. Trenwhitt-Shields Co. would construct the building, named for President Theodore Roosevelt.

The elaborate first floor would contain nine stores, each with a lobby entrance, along with a ballroom and dining room to seat 450. The basement would feature barbershop, beauty shop, coffee shop, pool parlor, laundry, kitchens, ventilation, and cafeteria for staff. The thirteenth floor featured special guest rooms and a large apartment for the manager’s use, along with a children’s play area.

The striking Roosevelt Hotel opened its doors Aug. 3, 1927, and officially opened Oct. 28-29, 1927, with elaborate Halloween parties. Because of its connections to screen notables, “it is expected that the hotel will be a rendezvous for professional folk,” noted the Oct. 23 Los Angeles Times. A large “screen” room would be set aside for their use. A large pipe organ was installed in the supper room, to provide dancing music and a large orchestra was hired for the season. The third floor roof featured a sun parlor.

Thanks to the celebrity connections, motion picture-related businesses quickly flocked to the location for office space. The Academy of Motion Picture Arts and Sciences established an office and meeting room on the mezzanine. Motion Picture News opened its Hollywood headquarters on the same floor in October 1928. A talent agency moved in. Stills photographer Melbourne Spurr located a studio in the edifice in 1930. Fawcett Publications also moved in that year. 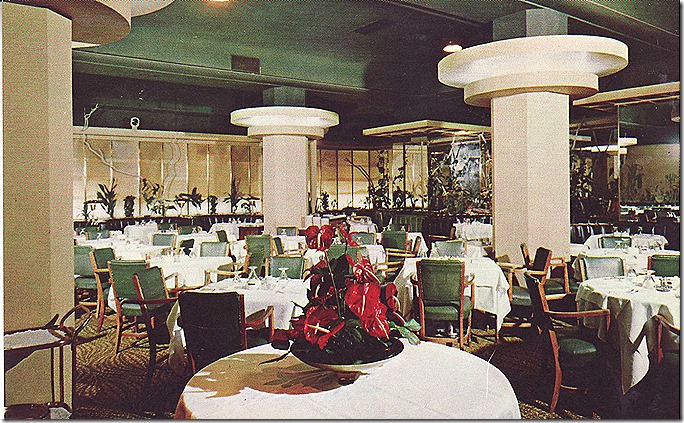 The Garden Grill, shown in a postcard listed on EBay as Buy It Now for $3.98.

The Hotel Holding Co. sold the hotel to broker James Long Wright in March 1928, who intended to pay for it by subscription, but was soon forced to turn it back over to the group. Motion Picture Classic called the Roosevelt in spring 1929, “”Hollywood’s hotel, run by Joseph Schenck and a few other movie people who must have an outlet for their profits — that hostelry of hostelries where the Motion Picture Academy of Arts and Sciences holds its carefully publicized sancto-sanctorum meeting to discuss naughty fan writers… .”

Centrally located in the heart of the entertainment community, the Roosevelt Hotel hosted stars attending Grauman’s spectacular premieres at the Chinese Theatre across the street. Film companies held press conferences at the facility. The Society of Motion Picture Engineers held sound tests in the building and the American Society of Cinematographers demonstrated lighting tests. In the sound and projection room, AMPAS presented special tests recognizing modern improvements in sound, picture and equipment. Many film-related organizations threw conventions and annual meetings here. Of course, AMPAS gave birth to the annual presentation of Academy Awards by holding its first awards banquet in the beautiful Blossom Room May 16, 1929. 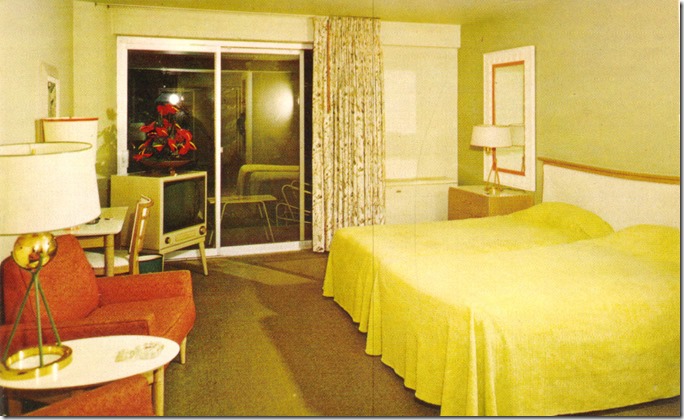 A room in the Hollywood Roosevelt Hotel, shown in a postcard listed on EBay as Buy It Now for $5.24.

Over the next several years, the renovated hotel opened such new amenities as the Roosevelt Hotel Flower Shop, decorated in colors of green orchid and silvery art deco, and the Cine-Grill, a streamline-moderne jazz lounge featuring vocal performances.

Socially, the classy Roosevelt Hotel also served as the ultimate entertainment and party getaway. The Blossom Room hosted many elegant soirees as well as regular nightly dancing parties, as their band, Irving Aaronson and His Commanders, rocked the house. Stars came to dance the night away at Hollywood’s hottest dance club. Popular bands played from time to time, and famous dancers like Ann Pennington and Julanne Johnston gave special feature performances. For a short while in 1930, Xavier Cugat and his Tango Orchestra performed on tango nights.

Other social highlights wooed customers. The ladies who lunch crowd adored the Tuesday buffet lunches, with celebrities regularly making appearances. The Blossom Patio Roof Garden, located atop the three-story annex, featured dining, dancing, and nightly performances popular with the cinematic crowd. The Roof featured dining at lunch and dancing nightly. In 1934, the Hotel added Saturday Afternoon Dansants for a more relaxed afternoon out.

Over the years, new owners attempted to adapt the facilities for the times, renovating the look of the interior and replacing the furniture. They switched out entertainment trying to stay up-to-date. Quality, style and usage dropped. After acquiring the National Historic Register property in 2005, Thompson Hotels has restored the Roosevelt back to much of its 1927 roots. They have reintroduced stylish dining opportunities.

Turner Classic Movies recognized the old world elegance of the property in 2010 when organizing its first TCM Classic Movie Festival. It established the festival headquarters at the classy grande dame, saluting classic films and personalities at many of the same location venues visited by the great stars of Hollywood. Their relaxing discussion events called Club TCM occur in the same Blossom Room which hosted the first Academy Awards ceremony. Many stars will be interviewed in the classic lobby lounge of the hotel. Other events will occur poolside, where Marilyn Monroe posed for early cheesecake photos.

The Roosevelt Hotel once again reigns as Hollywood Party central, inviting guests to step back in time to a world of elegance and old world glamour, qualities that never go out of style.