JACK BENNY HASN’T reached his place in the sun as a top comedian without good reason, and that is real ability. We were all reminded again of Jack’s spontaneous wit at the Academy Awards program. He was excellent as master of ceremonies and although he was only supposed to do five minutes, because of a gap he had to fill he was on for fully 20 and couldn’t have been more amusing. He was with Jack Warner, who has just signed him to a term contract. The search is on to get him some good comedies. Sort of a clean sweep for Warner’s in the awards — actor, production, direction and Irving Thalberg awards.

From the Milwaukee Sentinel. 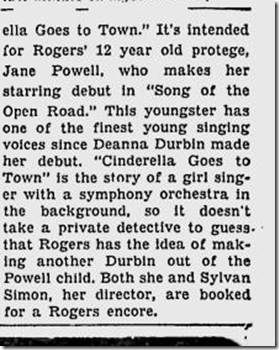 I am retired from the Los Angeles Times
View all posts by lmharnisch →
This entry was posted in 1944, Fires, Hollywood and tagged 1944, film, hollywood. Bookmark the permalink.