Vice Cop Kills Robber in Botched Holdup at the Roost 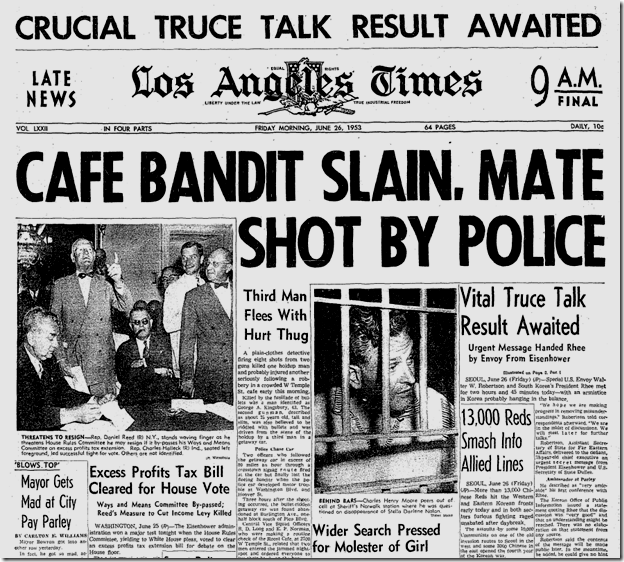 Glenn Elbert Kingsbury, shot in the chest by an LAPD vice officer, staggered backward into the Roost Cafe, which he had just robbed, and collapsed on the floor, moaning: “Oh my God! Not this way! Not this way!”

Kingsbury, 31, had been living with his brother Harry T. Kingsbury Jr., in an apartment at 672 S. Rampart Blvd. after getting out of prison. 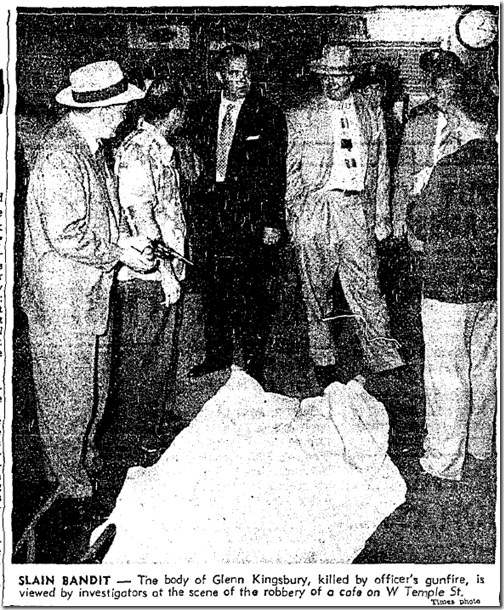 Kingsbury’s brother had been suspicious since finding two revolvers and a shotgun in the apartment. In a drunk response to his brother’s questions, Kingsbury mumbled an incoherent explanation about holding up the Miramar Hotel in Santa Barbara. “They had gone to the races and spent all the dough,” the brother told police.

Kingsbury had been part of a robbery ring and early on June 26, 1953, two of the men decided to hold up the Roost cafe, 2700 W. Temple, site of the notorious 1937 slaying of Les Bruneman.

On the same night, LAPD Central Vice Officers R.D. Long and E.P. Norman had been making a routine check on the cafe. Complying with alcohol control regulations, Norman left his gun with Long and went into the Roost while his partner waited outside.

In the meantime, Kingsbury and Robert W. “Jack” O’Leary, 31, pulled up to the front of the cafe, drove away and then returned and went inside.  (Note: It’s a little unclear from news accounts whether there was a third man in the getaway car.)

O’Leary drew a revolver and yelled: “This is a holdup! We mean business and we’ll use these guns if necessary.” At the bar, Norman complied with the robbers’ order for everyone to lay their heads on the bar. He was unarmed but said that even if he had a gun it would have been impossible to use it because the cafe was so crowded.

Kingsbury emptied about $150 from the cash register into a paper bag and pistol-whipped a man for being to slow to put his head on the bar. Then the men took the patrons’ wallets.

Outside the cafe, Long had become increasingly suspicious. He cocked both guns – his own and Norman’s — and waited, flattening himself against a wall near the door and listening to the robbery unfold.

O’Leary came running through the door first. Long shouted for him to stop and fired once as O’Leary ran to the getaway car.

Kingsbury followed, carrying the paper bag full of cash and wallets. Long shot him in the arm and the chest. Fatally wounded, Kingsbury staggered backward, collapsing on the floor.

O’Leary dumped the car at Burlington near Pico and went to see Harry Kingsbury. He said:  “Your brother was just shot in the Roost Cafe…. I’m hot and I’ve got to get going.”

On July 3, 1953, O’Leary and two other members of the gang, David Weaver, 36, and Arthur Watson, 26, were brought back to Los Angeles from San Francisco to stand trial. On Oct. 9, 1953, The Times reported that all three had been convicted in holdups and were facing sentences of life in prison. 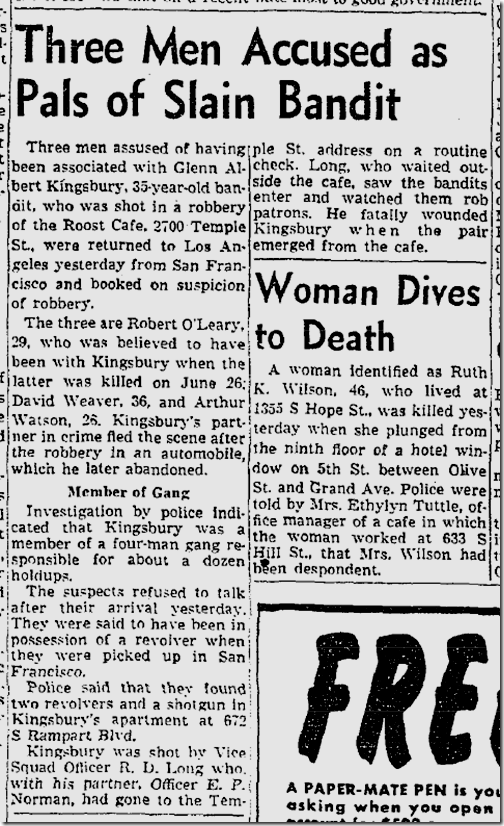 I am retired from the Los Angeles Times
View all posts by lmharnisch →
This entry was posted in 1937, 1953, Crime and Courts, LAPD, Nightclubs and tagged 1937, 1953, lapd, Les Bruneman. Bookmark the permalink.