In case you just tuned in, I am using the Wikipedia entry on Wallace Beery — alleging that he was involved in the death of Ted Healy — as a way to explore Wikipedia’s fundamental problems with accuracy and delve into Hollywood myths.

Thanks for sticking with this, as I said when I began, this is always a tedious process.

I have found one earlier published account of the Ted Healy incident. However, this one does not involve Wallace Beery. Unless someone finds an earlier incarnation, the “Wallace Beery beat Ted Healy to death” yarn first saw print in Jeff and Tom Forresters’ “The Three Stooges,” then spread to E.J. Fleming’s “The Fixers” and then to Wikipedia.

This version appears in Michael Fleming’s “The Three Stooges: An Illustrated History,” published in 1999.

Unfortunately, there are no footnotes in this book, either 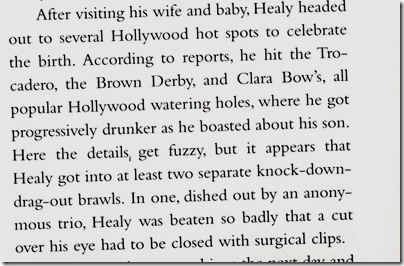 And here we find the genesis of the beating “dished out by an anonymous trio.” No source is cited beyond “according to reports.”  Whose reports? We will never know. 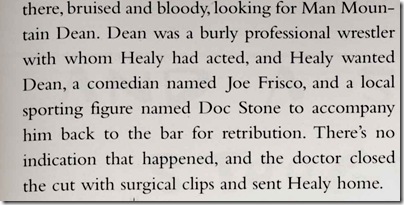 Ah! Notice that in this version, Dean — who appeared with Healy in the 1935 Jean Harlow film “Reckless” — has replaced “Jack Antler” in the three friends listed in news accounts who helped Healy. And in this version, Healy wants them to return to the Trocadero for revenge.

And no, there isn’t a single news story that says anything like this. 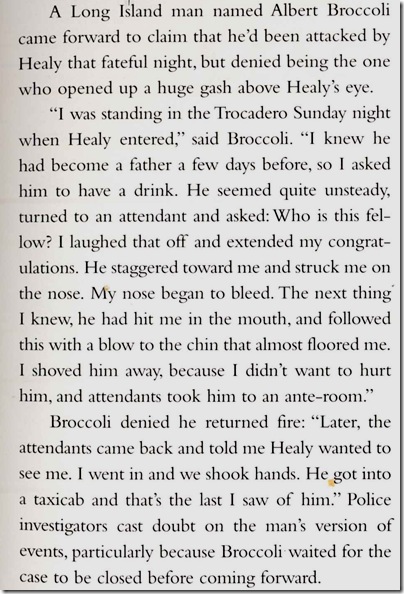 This is simply bizarre. We find Albert Broccoli’s first-person account, except that it’s not a precise quote of what appeared in the Los Angeles Examiner nor of what was published in the Herald-Express. As far as I can determine, no other newspaper had Broccoli’s version of what happened. Because there are no footnotes, we don’t have a clue as to the source.

I am retired from the Los Angeles Times
View all posts by lmharnisch →
This entry was posted in 1937, Film, Hollywood and tagged #Wikipedia, 1937, hollywood, Ted Healy, Three Stooges, Wallace Beery. Bookmark the permalink.