People line up outside a meat market at 2100 N. Broadway.

March 28, 1943: And did the “Greatest Generation” meekly, humbly and patriotically accept meat rationing for the war effort?

They did not. They fought for every scrap.

Mobs of clamoring men and women, in scenes virtually unparalleled in Los Angeles, yesterday battled butchers and each other in a fight to stock up on meat and get a head start on point rationing, which begins tomorrow.Traffic jams were common in front of some markets which had seemingly miraculous quantities of meat, as word spread by mouth and telephone.

Los Angeles is reading: “The Robe,” “Mrs. Parkington,” “Guadalcanal Diary” and “Our Hearts Were Young and Gay.” 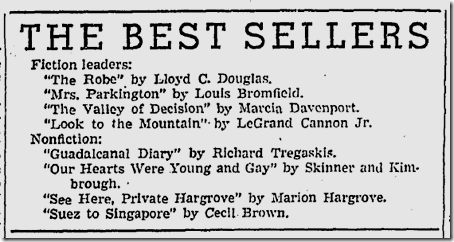 I am retired from the Los Angeles Times
View all posts by lmharnisch →
This entry was posted in 1943, Books and Authors, Broadway, Comics, Downtown, Food and Drink, World War II and tagged #food, 1943, books, Rationing, World War II. Bookmark the permalink.