Posted on February 2, 2013 by lmharnisch 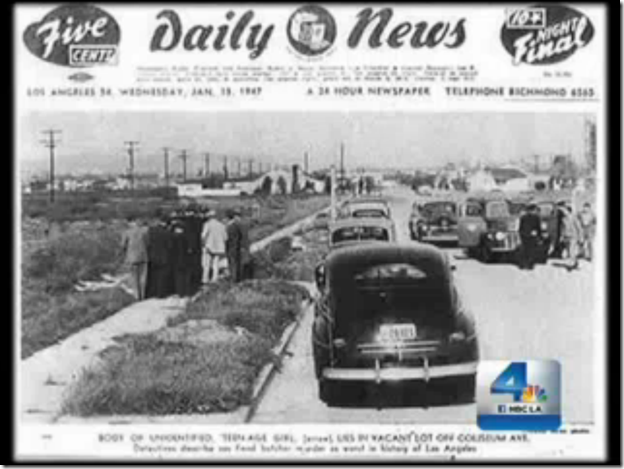 There are about a thousand things I would prefer to do besides shoot holes in the latest installment of the Dr. George “Evil Genius” Hodel franchise. But I heard from a friend last night that KNBC-TV Channel 4 had aired a segment about the Black Dahlia case. I missed it (thank heavens) but it’s on the nbclosangeles.com website. And the whole thing reminds me of poor old crazy Janice Knowlton (RIP), who insisted that her father, George, killed the Black Dahlia.

I wouldn’t recommend that anyone actually watch the segment, because you’ll just have to “unlearn” the mistakes but basically it rehashes the “Black Dahlia Avenger” books and insists that the Evil Genius killed the Black Dahlia in the basement of his house at 5121 Franklin Ave.

You may recall the previous “evidence” used to link the Evil Genius to the Black Dahlia case: photographs found in his belongings after his death that showed Elizabeth Short. Only, no, they weren’t of Elizabeth Short at all. Oops.

In reality, there is nothing to establish that the Evil Genius and Elizabeth Short – nicknamed the Black Dahlia – ever met. Zero. Nada. Zilch.

It is true that Dr. George Hodel was a suspect for a couple of weeks. This may sound more convincing than it actually is because there were hundreds of them; the investigators treated everybody who knew her as a suspect. And no, there’s nothing to show that they ever met, but the police also looked at anyone with any sort of  medical background (no, Dr. George Hodel was not a surgeon) who had anything in their past that involved sex charges, like Dr. Patrick S. O’Reilly, a Glendale osteopath who was accused of “mistreating” a telephone operator.

In this case, we have Paul Dostie, a retired police officer, and his cadaver dog Buster exploring the Sowden House in a segment that was taped but not used in a recent “Ghost Hunters” episode.

Where are Elizabeth Short’s remains?
A cemetery in Oakland.

OK, if her remains are buried in Oakland, what can there possibly be to find in the basement of the Sowden House?
Well, she was drained of blood.

Correct. But hasn’t it been established that draining the body of blood required lots of running water – and therefore a drain?
Um. I guess so.

So if the body was cut in half but none it was missing and the blood was washed down the drain with large amounts of water, what is left to find?
Nothing.

I am retired from the Los Angeles Times
View all posts by lmharnisch →
This entry was posted in 1947, Another Good Story Ruined, Architecture, Black Dahlia, Hollywood, LAPD and tagged 1947, black dahlia, hollywood. Bookmark the permalink.