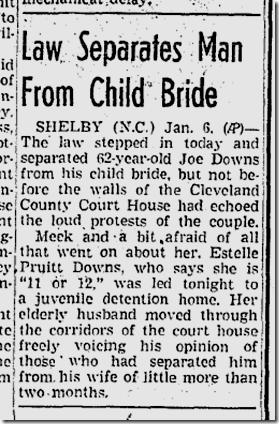 Jan. 7, 1942: Whenever people give me this nonsense about the past being “a kinder, simpler time,” I always think of stories like Joe Downs and his “wife.”

President Roosevelt delivers his annual State of the Union address, which was praised by the Republicans in Congress. Yes, kids, there was a time when Republicans had the audacity to praise a Democratic president.

There are many interesting aspects of Roosevelt’s speech (on the jump) but I’m particularly struck by his conclusion. It’s difficult to imagine any contemporary politician invoking religion so forcefully.

Our enemies are guided by brutal cynicism, by unholy contempt for the human race. We are inspired by a faith which goes back through all the years to the first chapter of the Book of Genesis: “God created man in his own image.”

We on our side are striving to be true to that divine heritage. We are fighting as our fathers have fought, to uphold the doctrine that all men are equal in the sight of God. Those on the other side are striving to destroy this deep belief and to create a world in their own image — a world of tyranny and cruelty and serfdom.

That is the conflict that day and night now pervades our lives. No compromise can end that conflict. There never has been — there never can be — successful compromise between good and evil. Only total victory can reward the champions of tolerance and decency and freedom and faith.

Tom Treanor says: We didn’t save any rubber Sunday. If anything, the Sunday driving was heavier than usual. At the intersection of Riverside Drive and Los Feliz Blvd., cars were backed up at one time between a quarter and half a mile.

As I have said before, traffic in Los Angeles is not a new problem; it is a very old one that we are still trying to solve.

“How Green Was My Valley”opens tomorrow at Grauman’s Chinese and Loew’s State.

Jimmie Fidler says: A casual line in a letter just received from Fred Allen set me thinking. Says Fred: “There are so many ‘anti’ campaigns today a guy with a good ‘for’ movement could clean up.