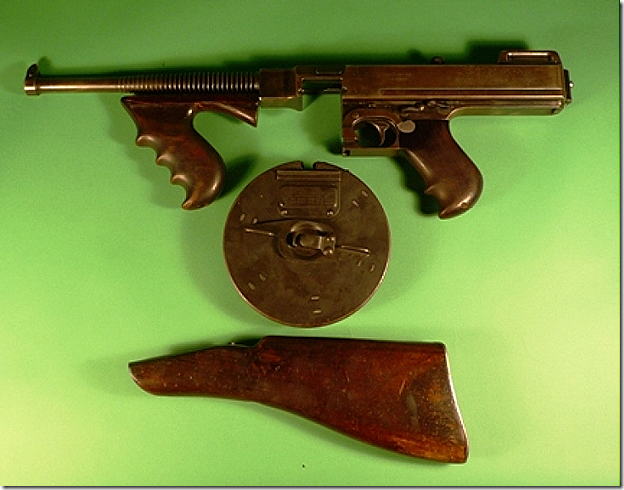 This .45-caliber Thompson submachine gun 1921A, reputedly seized after a 1933 shootout with Bonnie and Clyde, is being auctioned, along with the couple’s Winchester 12-gauge shotgun on Jan. 21, by Mayo Auction and Realty of Kansas City, Mo.

The weapons have been in the possession of a police officer’s family for many years and were loaned to the Springfield, Mo., Police Museum from 1973 to 2011, the vendor says.

Presumably, any collector with enough money and interest to acquire this submachine gun knows the paperwork that is involved in owning one.

And in case you’re wondering, a submachine gun fires handgun ammunition (.45 caliber, in this case) rather than machine gun-caliber ammunition.

I am retired from the Los Angeles Times
View all posts by lmharnisch →
This entry was posted in 1921, 1933, Crime and Courts, Film, Hollywood and tagged #firearms, #Thompson submachine gun, Bonnie and Clyde. Bookmark the permalink.

1 Response to Bonnie and Clyde Submachine Gun for Sale