Carl and Jerry Get a Kindle Fire

I bought a Kindle Fire a few days ago and since it arrived I’ve been thinking about John T. Frye W9EGV.

Unless you are an electronics geek of a certain age, it’s likely you have never heard of Frye. In the 1950s and early ‘60s, his stories about two teenage electronics geeks named Carl and Jerry appeared every month in Popular Electronics, sort of like the Hardy Boys with a soldering iron and schematic diagrams. 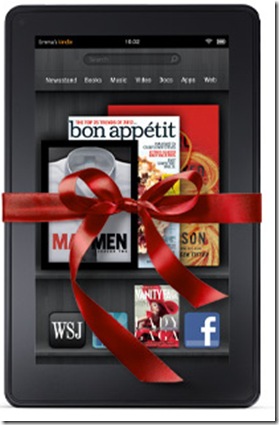 In the early episodes, Carl and Jerry were high school students and had a small lab with some equipment (both the boys were ham radio operators) and a beat-up couch, a setting Frye used to explain the fundamentals of electronics, like the difference between PNP and NPN transistors, which were driving vacuum tubes into extinction.

In the later stories, Carl and Jerry went to “Parvoo” University (presumably a stand-in for Purdue) and got into more complicated problems with increasingly complex technology. In one story, they caught a pirate radio operator who was harassing the campus station and in several installments, they cannibalized a TV set or auto parts to build a transmitter and get themselves out of trouble.

Out of all of Frye’s stories, one has particularly stuck in my mind. That’s “Succoring a Soroban,”in which the young men discuss a small personal computer consisting of tiny (relatively) modules that could be plugged together in various arrays.

The entire computer consists of six units, each a little larger than a package of king-sized cigarettes, that can be connected in various combinations with plug-in wires. There’s an adder unit, two coefficients, two integrators, and one meter control unit. The units are self-powered so that the student can use the computer while he’s parked in his car or sitting out under a tree if he wishes

John T. Frye W9EGV (that’s Easy George Victor to you)  committed suicide in 1985, when dinosaurs like Radio Shack’s  “Trash-80” ruled the Earth. He never lived to see the creations of some of the former teenagers he inspired through his writing in Popular Electronics and Electronics World.

If you want to read some Carl and Jerry stories on your Kindle Fire, here’s the link. And apparently all the stories have been republished in paperback.

Here’s to you W9 Easy George Victor. You are not forgotten — and thanks.

ps. I just know Carl and Jerry would have rooted their Kindle Fire and installed Ice Cream Sandwich on it.

I am retired from the Los Angeles Times
View all posts by lmharnisch →
This entry was posted in 1958, 1963, Books and Authors, Radio, Television and tagged #Day the Earth Stood Still, #ham radio, #Kindle Fire, #robots. Bookmark the permalink.
%d bloggers like this: