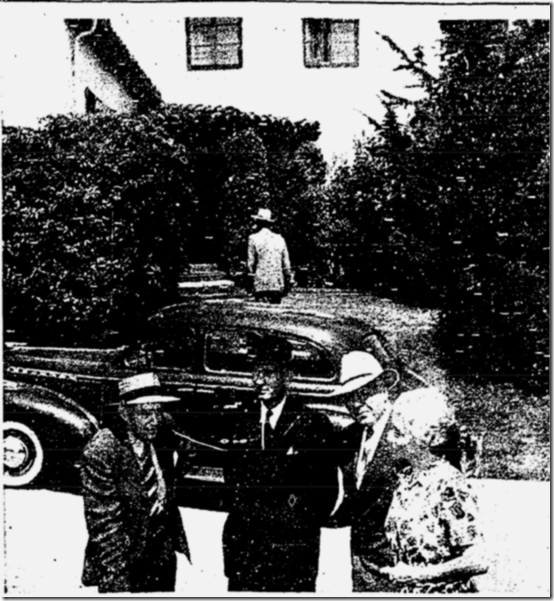 Sept. 16, 1941: The Silver Lake Hammer Murder turned out to be far more complicated than I expected. This segment looks at the lives of victim Florence Stricker and her husband, Dr. George H. Stricker, up to the time of the killing.

Florence Frey Stricker was 48  — not 42 — when she was found dead from a fractured skull and jammed into the hallway closet of her home at 1253 Moreno Drive, Silver Lake.

She was born in Ohio on Christmas Day, 1892, the only child of William and Mary Frey. Her father was a well-to-do businessman in Findlay, Ohio, where he was elected mayor in 1913 and was director of a bank.  William died in 1918 and Mary died in 1928, so Florence was presumably fairly wealthy from her parents’ estate by the time she got married about 1929 in Reno to Dr. George H. Stricker, a chiropractor.

According to The Times, she was killed by a blow to the temple with a ball-peen hammer. There was no sign of a struggle.  From the lack of blood anywhere else in the house, investigators suggested that she had been killed in the closet.

A back door to the home was found ajar and police theorized that this was how the killer got in. George Sticker said his wife kept a key hidden outside the door in case she was ever locked out. Every room in the house had been ransacked and all of Florence Stricker’s pocketbooks had been emptied onto the floor. George Stricker said two diamond rings had been removed from her hands – but not her wedding ring, which had a large diamond. A diamond Masonic pin that belonged to her father was also reported missing but later found in her safe deposit box.

There is no mention of her having any children. She is buried with her parents at Maplegrove Cemetery in Findlay.

It’s difficult to track George Stricker’s history up to the time of the killing. He was born in California on Oct. 8, 1898.

According to the 1932 Los Angeles city directory, there was a Stricker Health Institute at 422 S. Western Ave.  In 1938, Stricker was living at 311 1/2 Columbia Ave., but there’s no mention of Florence.  The next year, he was working with Frank McCoy and living at 473 Witmer.  McCoy called himself a “drugless physician” with offices in the McCoy Building 1151 W. 6th. McCoy, who was once The Times’ health advisor, died in 1940.

I am retired from the Los Angeles Times
View all posts by lmharnisch →
This entry was posted in 1941, Cold Cases, Crime and Courts, Homicide, LAPD and tagged #1941, #hammer murder, #Silver Lake. Bookmark the permalink.