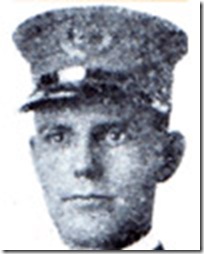 The daily NewsWatch of the Los Angeles Police Protective League always honors the anniversaries of LAPD officers killed in the line of duty. For June 15, the union features the death of LAPD Motorcycle Officer Elijah Peter Bradley, who was killed by a streetcar at at Ventura and Lankershim boulevards in the San Fernando Valley.

According to The Times, Bradley tried to cross the Pacific Electric tracks ahead of a streetcar, even though the crossing signals had been activated. Motorman R.M. Arnold said that when he realized Bradley was going to try to cross the tracks, he slammed on the brakes, but the streetcar, which was going about 15 mph, couldn’t stop in time.

Bradley was thrown from his motorcycle and dragged almost 400 feet by the streetcar, badly mangling his body. He had been with the department for 10 years and was 36 years old.

Bradley was apparently a compassionate officer. In September 1911, a 60-year-old Latino woman was thrown off the streetcar because she couldn’t pay the 5-cent fare ($1.16 USD 2010), The Times said. The woman threw rocks at the departing streetcar, which stopped so that one of the streetcar operators could call the police.

Bradley arrived, listened to the problem and gave the woman a dime to get home. 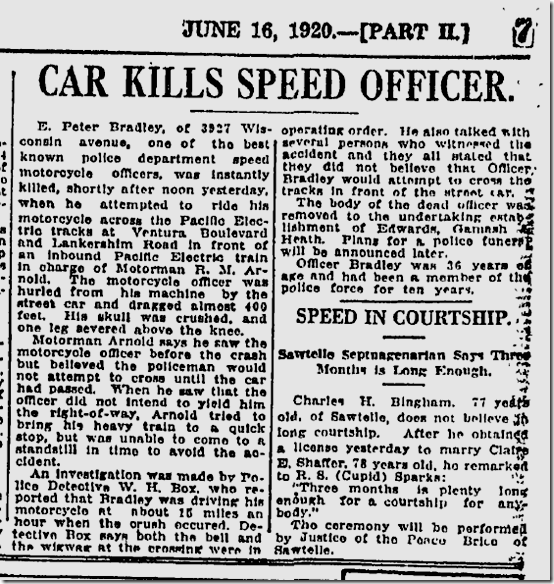 I am retired from the Los Angeles Times
View all posts by lmharnisch →
This entry was posted in 1911, 1915, 1920, Crime and Courts, LAPD, Obituaries, San Fernando Valley, Streetcars, Transportation and tagged crime and courts, lapd. Bookmark the permalink.