Another dose of skepticism

Theodore Roosevelt “Lazy Boy” Beckham has been dead for 50 years and is still causing trouble.

I was already bothered by the conflicting accounts of his death, but now that I’ve gone into the microfilm at the Los Angeles Public Library, I know more and understand even less.

Here are the three different versions of Beckham’s death. At least one of them cannot possibly be true.

Recall that Beckham killed Officer Robert R. Christensen during a struggle in which he got Christensen’s .38 Colt Detective Special and shot him to death.

According to the Mirror and The Times, police found Beckham’s car at 99th and Grape streets and began searching the neighborhood.

The slayer sought refuge in a house at 2049 E. 99th Place. As police were surrounding the area he emerged between two houses and tried to run.

“We hollered at him to stop,” Worden said, “but he kept running.” The officers fired four shots. 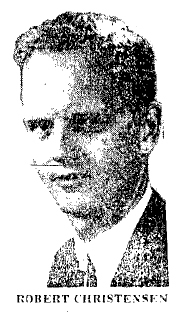 The killer had been hiding out in an apartment at 2409 E. 99th Place and tried to make a break for it as the officers closed in.

Officers J.O. Worden and  K.E. Gourley saw him talking to a girl in front of 2400 E. 99th Place and slammed their car over the curb and up on the lawn.

They piled out with drawn guns and Beckham started to run. When the officers yelled for him to halt, the killer dropped his coat, whirled and leveled a snub-nosed .38 at the policemen. It was the gun he had taken from Christensen.

Beckham got off one shot but it went wild. The two officers returned the fire and dropped Beckham in the street with a bullet in his heart.

The Herald-Express story of Oct. 15, 1957, merely says that Worden and Gourley each fired twice, with one bullet hitting Beckham in the heart as he tried to flee. However, the paper added the following information:

Suddenly, Mrs. Miller said, a neighbor burst into the house and announced:

“The place is loaded with heat. Police are swarming around here.”

Beckham left the table, still giving no indication he was the man police were after. 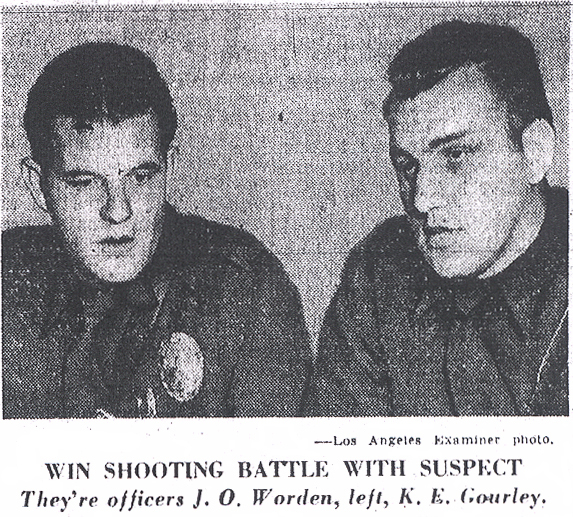 The Examiner, The Times’ morning competitor, has this variation in which the officers questioned Beckham. He ran, turned, pointed a gun at the officers but did not fire:

Officers J.O. Worden and K.E. Gourley of the 77th Street Patrol Division, driving along 99th Street in their car, spotted Beckham walking between houses with a girl.

The officers drove over the curbing, across a lawn and up to within a few feet of Beckham, where they got out of their car and began to question him.

Beckham dropped a jacket which he had been carrying over one arm, revealing the revolver he had taken from the officer he killed.

As the jacket fell, Beckham ran toward the street, turning and aiming the revolver at Worden and Gourley, who opened fire.

As Beckham turned, one of the officers’ bullets crashed into his heart and he slumped to the pavement.

By now, you may be wondering what the city’s African American weeklies, the California Eagle and the Los Angeles Sentinel, had to say. I certainly was.

The Sentinel immediately provides one critical detail: The shooting occurred in a housing project.

As the officers began to close in, they observed Beckham and a girl walking between two houses in a housing project.

Ordered to halt, the suspect began to run and dropped a leather jacket that revealed a gun under his belt, which police said was used to slay Christensen. The girl, a 14-year-old juvenile, was taken into custody on a narcotics charge, police said. Officers K.E. Gourley and J.O. Worden said they opened fire on the suspect and Beckham fell dead with several bullet wounds in his body.

And finally we have the California Eagle:

Theodore Roosevelt “Lazy Boy” Beckham, a 25-year-old Texan with a lengthy police record of arrests for indecent exposure, went to the home of his latest girlfriend Monday noon and calmly bragged: “I just shot a policeman.”

Then he handed her and two of her teenage girlfriends a reefer and they all went upstairs and had a few puffs of marijuana. “Teddy,” as she called Beckham, wanted Shirley May Miller, 19, of 2049 E. 99th street, to play cards with him.

He died at 3 p.m. from bullet wounds in the chest and back. In his hands as he fell to the ground was Christensen’s snub-nosed .38 revolver.

While “Lazy Boy” and the young girls were talking about playing a game of cards, a neighbor came in and told them the project was surrounded by police who were looking for the murderer of Christensen.

Beckham told the girls they had to help him and walk with him up to the bus stop and act as if nothing had happened.

According to Sgt. C.W. Beckner of the  homicide detail, plainclothesmen were watching Beckham’s car, about half a block away. A patrol car, passing the scene, spotted Beckham and the girl as they came out from between the buildings and immediately recognized him as the hunted killer.

Beckham began to run. He had a brown leather jacket over his right arm.

The officers again ordered him to “Halt!”

As Beckham continued to flee, the jacket fell to the ground. In his hand, he had Christensen’s gun. Officers J.O. Worden and K.E. Gourley opened fire. Each fired two shots that found their mark.

Beckham fell to the ground still grasping the tell-tale gun.

When Beckham fled from a house at 2049 E. 99th St., he apparently attempted to pull the snub- nosed revolver from his waistband. The hammer caught in his shirt and he was shot.

The pursuing police were 40 to 50 feet away and no other wounds were found.

The autopsy revealed that the bullet went through his heart from a range close enough to leave powder burns on the wound.

When police closed in on him at 2049 E. 99th St. five hours later, Beckham pulled the dead officer’s gun from his waistband in an attempt to shoot it out with police.

But the hammer caught in his shirt. The gun went off and the bullet struck him in the heart at a range close enough to leave powder burns on the wound, the autopsy report showed.

It was the only wound in his body.

Apparently only the Herald (Oct. 22, 1957) voiced skepticism about the change in stories:

It was first thought that the killer, Theodore Roosevelt Beckham, 25, had been shot by brother officers of the slain policeman, Robert R. Christensen, as he tried to flee from a house at 2049 E. 99th St.

There was only one wound through the heart. The bullet was fired at a range close enough to leave powder burns. The officers who fired four shots at him were 40 to 50 feet away.

Police now theorize that Beckham shot himself accidentally when he tried to whip the gun.

Unfortunately, neither of the first two versions explains how Theodore Roosevelt “Lazy Boy” Beckham could have possibly managed to shoot himself once in the heart at close range, as found in the autopsy. Nor is there anything about the gun firing because the hammer snagged on his shirt.

And nowhere does any account address the fact that he was wearing overalls, which do not have a waistband, when he killed Christensen, as initially reported in the Mirror, which also published his description and the license plate of his car.

I was quite disappointed to find that none of the other papers published photos of the crime scene. All I have is this photo as enhanced by Clay Haskell. As it stands now, it’s impossible for me to be certain from the acute angle whether he’s wearing overalls.

I have to give the highest marks to the Eagle for getting details of what Beckham did before he was killed. In addition, only the Eagle quoted a police official by name, Homicide Sgt. C.W. Beckner. Only the Eagle noted that Christensen was found with a copy of Beckham’s mug shot in his pocket and that Beckham’s fingerprints were found on Christensen’s car.

What do you suppose the chances are of me getting a transcript of the inquest from the Los Angeles County coroner’s office?

Note: The original Herald-Express account says that according to Juanita James, 953 W. 7th St., who witnessed the fight, Beckham was clearly stronger than Christensen. She also said that several men saw the fight but did not intervene despite his cries for help. (The Herald says Christensen’s handcuffs were on the ground while The Times says they were on the car seat, such are the rewards of research).

I am retired from the Los Angeles Times
View all posts by lmharnisch →
This entry was posted in 1957, Homicide, LAPD and tagged 1957, lapd, officer-involved shooting. Bookmark the permalink.

2 Responses to Another dose of skepticism