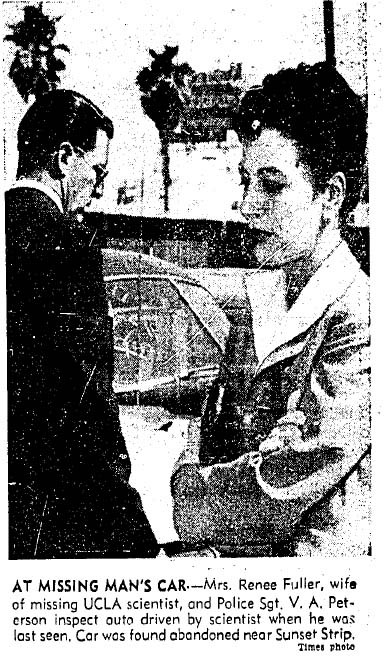 When Dr. George Ripley Fuller vanished,
he left few clues and countless questions. What we don’t know about him
would fill a book while the facts cover a page or two at most.

We know he was 27 when he disappeared, the youngest of three successful
brothers born to Mr. and Mrs. Walter Fuller of New York. We know he
graduated in 1953 from Cornell University’s medical school in New York.
And we know he was a research physiologist attending UCLA under a
one-year grant from the U.S. Department of Health.

We know he was married to a psychology student named Renee, whom he met in medical school.

Most important, we know he was a driven, tightly wound man whose life
centered on his work and that he had begun seeing a psychiatrist about six
months before he disappeared.

A week before he vanished, he and Renee made a trip to visit his
parents in New York. There was a violent argument, The Times said, in
which Renee sided with his parents. Renee later described this as a
“family spat,” but there were never any details on what the argument
was about.

The Fullers returned to Los Angeles on May 27, 1956, four days before he disappeared.

On May 31, 1956, Fuller received his paycheck. He also cashed a $20
check ($143.31 USD 2006) at UCLA Medical Center’s cashier’s office.
News accounts of the disappearance say that Fuller’s bank accounts were
untouched since he vanished.

At 7 on the evening of May 31, Fuller went to the medical center
for a seminar, but found that it was canceled. While he was there, he
invited several people to an informal seminar the next night at the
Fullers’ apartment.

He was never seen again.

On July 20, 1956, Fuller’s abandoned, dust-streaked 1949 Chevrolet
two-door sedan, California license JSR 808, was found  across from 1220
Sunset Plaza Drive. The driver’s window was rolled down and the keys
were missing. The car had apparently gone 75 miles since it was
serviced May 22, 1956, nine days before Fuller vanished.

According to Renee Fuller, nothing was missing nor was there anything
new. “I know of no reason why he would be in that area,” she said.

Dr. Charles H. Sawyer, head of the anatomy department at UCLA, said: “I
have worked closely with him and seen him under tremendous pressure
during important experiments–pressure I am not sure I could
withstand–and Dr. Fuller has never shown any signs of cracking or
instability.”

Perhaps the most remarkable aspect of Fuller’s disappearance is that
his family took absolutely no interest in it. Neither of his brothers,
one living in Maine and the other in Florida, nor his parents set foot
in Los Angeles as far as I can tell and apparently they had little
interest in solving what became of him.

Aside from the fact that Renee Fuller received a hoax phone call
demanding ransom money, we know very little more about her. The Times
and public records are silent on what became of her. They apparently
had no children.

I am retired from the Los Angeles Times
View all posts by lmharnisch →
This entry was posted in LAPD, Science and tagged 1957, missing persons, UCLA. Bookmark the permalink.