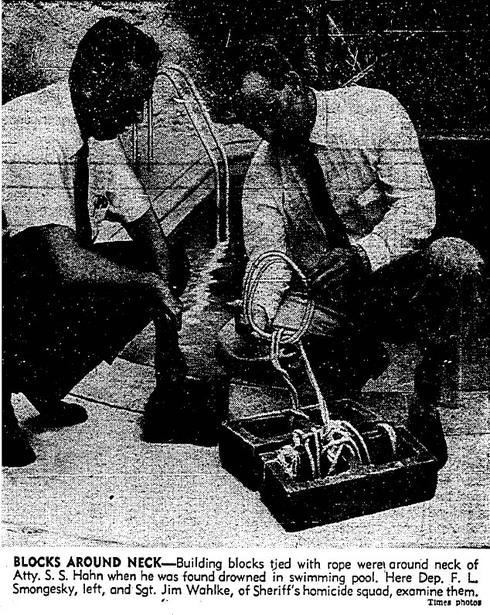 The lawyer drove up to the cabin in Tick Canyon, north of
Saugus, in his Cadillac. He should have been home in Beverly Hills by now, but he phoned his wife, Mary, that he was having dinner with a client.

He parked the Cadillac next to the cabin and left his jaunty straw
“boater” hat in the back seat. Maybe he sat in one of the chairs next to the pool for a while–perhaps all night. Then he put his glasses under the chair, took off his coat, with $109 in loose bills in the pocket, and laid it on the chair, along with his white shirt and tie, and a folder containing his identification cards.

Then he tied one end of a rope around his neck, threaded the other end through two concrete blocks and jumped into the deep end of the pool. That’s where he was found by 17-year-old Bob Nelson, a
neighbor who had been hired to do some chores around the cabin.

Sammy “S.S.” Hahn, 68, a Russian immigrant, is an obscure figure today, but at the time of his death, he was a well-known attorney who handled some of the most famous clients in Los Angeles, including Aimee Semple McPherson and murderess Louise Peete, one of only three women to be executed in California. A graduate of USC’s law school, Hahn was originally known for his defense work in high-profile criminal cases but later specialized in divorces.

He earned his nickname, “The Corporal,” during a sharp courtroom exchange with Col. William H. Neblett, who protested when Hahn continually referred to him as “Mr. Neblett” instead of “Col. Neblett.” “Your honor, Hahn said, “if my opponent insists on his military rank, so shall I. Henceforth, I respectfully request that I be addressed as Cpl. Hahn.”

Hahn’s apparent suicide puzzled his many friends and devastated his wife, Mary, whom he married in September 1954. Hahn’s wife of 36 years, Teresa, had died in May 1954. Some people speculated that Hahn’s death was not a suicide, especially because he left no note, but medical examiner Dr. Gerald K. Ridge found that his death was an uncomplicated case of asphyxiation.

I am retired from the Los Angeles Times
View all posts by lmharnisch →
This entry was posted in #courts, Suicide and tagged 1957, Aimee Semple McPherson, Louise Peete, S.S. Hahn, Suicide. Bookmark the permalink.

1 Response to Lawyer drowns in pool