On Jan. 2, 1951, Photographer Bud Gray and I were working the overnight Mirror radio car 91… after 2:30 a.m. the streets really are quiet until around 5 a.m. We had stopped at Hollywood Receiving Hospital and were headed north on Wilcox…I was driving.

The police radio came alive…69 meet 66 at Hollywood and Vine. Well, 69 was a sergeant and 66 was a district radio car and this was a most unusual call at 4:30 a.m. … so I decided to drive by since it was only a few blocks away.

Amazing… standing on the corner by the  Broadway Hollywood was Mickey Cohen… wearing his hat as usual… and waving his hands with an LAPD Officer Tommy Hutton.  He was agitated.

I nudged Bud, made a U-turn on Vine and parked across the street in front of the Owl drugstore.

I turned off the ignition and strolled across Vine and listened… no note taking.

“If you’ll take off your badge and come into the alley and fight me fair and square, I’ll give you my wife and my car,” growled Mickey.

(The blue Cadillac and his wife were parked a few feet away).

Officer Hutton had written Mickey a traffic citation for not proceeding on a green light–he had stopped to purchase a newspaper. 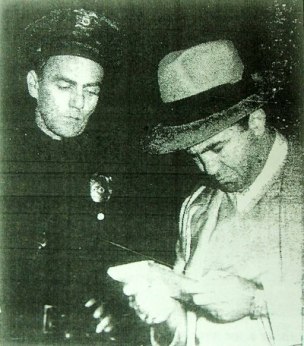 The sergeant arrived and explained to Mickey that by signing, he did not admit guilt, only to appear.

“If  you don’t sign, Mickey, we will take you to jail,” the sergeant explained.

Finally, Mickey signed, walked and entered his car, and drove south on Vine.

Meanwhile Bud Gray had set his Speed Graphic so he could shoot from the hip without focusing.

We jumped back into the radio car, called the office and sped to 2nd and Spring with the photos.

By the time  reporters in the police press room heard about  the incident, everyone  was gone, Mickey, the police and the few spectators.

We had a real beat… four good photos and details… all Page 1.

I thought of how wild Aggie Underwood, city editor of the Herald-Express, would be, as the Mirror guys had beat her team, again.

I am retired from the Los Angeles Times
View all posts by lmharnisch →
This entry was posted in Hollywood Division, Mickey Cohen. Bookmark the permalink.