Los Angeles has long been a haven for refugees and artists, particularly those fleeing political and militaristic struggles.  As early as 1915, Armenians began arriving in Southern California after fleeing from the massacres and pogroms inflicted on them by Kurds and Turks.  By December of that year, 1,500 Armenians lived here without knowing the whereabouts of many members of their families back home.

Many continued to come, as the papers warned of massacres, imprisonment, torture, and murder of innocent men, women, and children. Genocide.  An article’s headline in the September 27, 1915, Los Angeles Times read, “Massacre of Armenians at Height of Its Fury, … Report States that Five Hundred Thousand Men, Women, and Children Have Either Been Killed by the Turks or Driven to the Desert to Perish of Starvation – Extermination of Non-Moslems is Programme Decided Upon.”  850,000 were reported killed by late October, nearly three quarters of the population of the entire country. 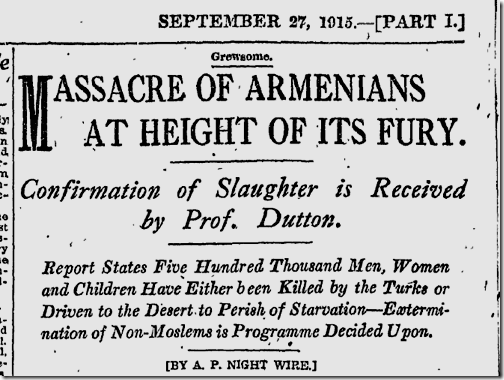 One person who lived through the hell of occupation and destruction was a young woman by the name of Aurora Mardiganian (born Arshalouys Mardiganian), a forerunner of Anne Frank.  She wrote a book detailing her tragedy and nightmare, which was later made into the film “Auction of Souls.”

Mardiganian and her family were rousted from their home in 1915 by Turkish troops and forced to join crowds of others marching into the desert with little food and water.  Along the way, girls were attacked and left by the side of the road.  An Englishwoman, Miss Graham, joined the Mardiganian family, hoping to give the family some protection.  The Turks ridiculed her and sold her, Aurora, and Aurora’s sister into slavery for 87 cents.  The men of the family were separated from the women and never seen again, as they perished in a building set afire.  For two years Aurora was bartered, sold, and tortured.  She miraculously escaped into Russia and eventually arrived in America.

Screenwriters Harvey Gates and his wife, Eleanor, became her guardians in New York City in November, 1917.  They transcribed her experiences with the help of the Near East Relief Fund and published the book under the title “Ravished Armenia.”  30 editions of the book were published between 1918 and 1935, with more than 1 million copies sold.  The story was also serialized in the Los Angeles Examiner, New York American, and Hearst papers.

Producer William Selig bought the film rights to the story, hiring Oscar Apfel to direct.  Apfel had co-directed “The Squaw Man” in 1913 with Cecil B. DeMille.  Selig also hired stars Irving Cummings and Anna Q. Nilsson and the film was shot in late 1918 at the Selig lot on Mission Road, later the Louis B. Mayer Studio.  The U. S. Censorship board passed the film with its genocidal scenes intact, stating  it was “a frank, straightforward exposition of  sufferings of Armenia, which make a sincere and powerful appeal to every drop of red blood in America’s manhood and womanhood.”

The mayor of Los Angeles introduced Mardiganian at a downtown luncheon in the Alexandria Hotel in January 1919, but the film did not screen here until June 1919.  It played New York City, Boston, Chicago, and Philadelphia in the spring at $10 a head, with all earnings going to Armenian relief.  Some states banned the film; England finally screened it after removing references to Christians in subtitles and scenes of women being crucified.

Constant public appearances began taking their toll on Mardiganian, and she began asking questions about how much money was actually going to the Relief effort.  She was soon sent to a convent school, and look-a-likes took her place.  She escaped the school in 1921 and sued Harvey Gates for money owed her on the film.  Out of the more than $8,000 she had earned for the film, Gates claimed that most was spent for publicity expenses, leaving her only $195.  Mardiganian continued to live in the Los Angeles area, and was interviewed by film historian Anthony Slide in the early 1990s, who later wrote a book about her and the film.  She was placed in an Armenian retirement home in January 1994, passing away in February of that year.  She left no survivors.

Over the years, most of the records and prints of the film were destroyed.  Mardiganian possessed some records, and the Margaret Herrick Library possesses still photographs of the film.  Only 20 minutes of the film still survives.  It was last screened about two years ago in Pasadena 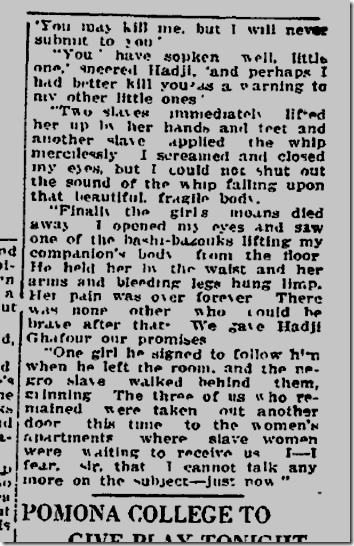