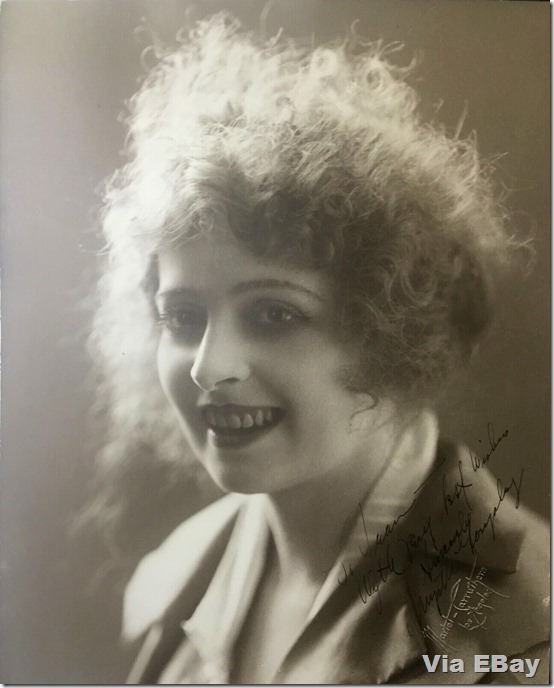 An autographed photo of Myrtle Gonzalez by the Martel-Carruthers studio, inscribed to Jean Herscholt, listed on EBay at $250

Mostly forgotten today because of her untimely death in the 1918 influenza epidemic, Los Angeles native Myrtle Gonzalez began singing and reciting as a child before becoming one of cinema’s first Latina stars. Proud of her Hispanic heritage, Gonzalez never stooped to portraying negative stereotypes of Latinos, but instead focused on dramatic and action roles, gaining the moniker “nature girl.”

Born September 28, 1891, in Los Angeles, Gonzalez grew up in the Catholic Church, a refuge for her Los Angeles-born father, Manuel, and her Irish American mother, Lillian. The Gonzalez family supposedly lived for several decades in Los Angeles, with her great-grandfather one of the first people married in the Old Plaza Church. Lillian practiced her music talents, performing in church and organizing programs of recitations, songs, dance and drama for a variety of venues, often as benefits for organizations like the Plaza Church. She directed choirs for adults and children, taught music lessons and managed her students as well. In 1901, she even produced and directed a children’s opera version of “Cinderella” featuring more than 100 voices. 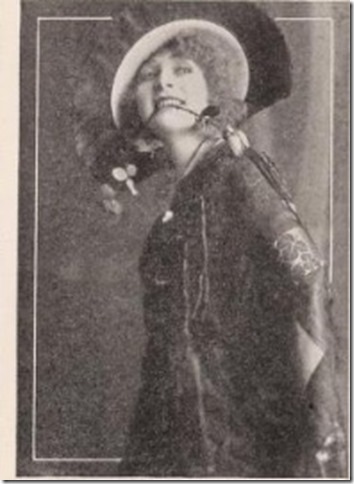 Gonzalez  and her baby sister, Stella, demonstrated musical skill as well, taking lessons from their mother and extolling their gifts singing in religious services. Proud of their daughters’ talents, the Gonzalezes allowed them to first perform in benefits for Catholic services and organizations. Gonzalez appears to have first performed as early as 1898 in a pageant and recital, and in 1901 performed for a Sacred Heart Church benefit, with her comic dance so pleasing audiences that she won the prize for most popular little girl. Over the next ten years, Gonzalez gained fame and attention singing, dancing, and reciting for fairs, benefits, recitals and productions.

The family proudly celebrated their Spanish heritage for Mexico’s Independence Day on September 16 every year, particularly for the Cura Hidalgo Club’s galas. Led by their father, Manuel, the Cura Hidalgo Club was an exclusive club for prominent Latino Angelenos. Lillian Gonzalez choreographed and directed each year’s celebrations, which included their daughters in 1905 in the Plaza Church. Myrtle Gonzalez sang and dance and also played the violin obligato during the performance.

Skillful in music and performance, Gonzalez would go on to play the piano and other instruments, as well as giving recitations and speeches. In the 1906 Liberal Alliance performance staged by her mother at the Chutes Park, Gonzalez and a trio of young children received a special ovation representing California, with the girl carrying the state flag. Organized by her father, Manuel, along with Paul de Longpre and others in 1905, the organization’s aim was “to promote a spirit of unity and good fellowship among the citizens” of Los Angeles, “and especially to foster a desire for public gatherings of a cosmopolitan nature,” per the April 1, 1906 Los Angeles Times.

Learning well from their parents, the children grew up with a desire to help others. On April 26, Stella Gonzalez organized a benefit vaudeville performance at the Hotchkiss Theater for victims of the San Francisco earthquake, with Fay Bainter, Muriel Fuller, Myrtle Gonzalez, and other performers taking part.

On September, 15, 1907, Gonzalez, 16, was featured in the Los Angeles Times, with whisperings that she was engaged. Featuring denials by the outspoken young woman, the paper declared her “…the most beautiful girl in the Spanish American colony, whom the artists rave over…quite famous among local beauty lovers for her rare type of features.” The paper went on to describe her gray eyes, long, curling lashes, and dewy white skin, noting that a well-known local artist likened her photographic appearance “to one of Raphael’s Madonnas.” Mrs. Gonzalez avowed that photographers might be allowed to shoot portraits, but no painters would be allowed to draw her portrait.

By 1909, Gonzalez performed around the Southland in operatic and stage performances for a variety of groups including a massive performance of the Passion Play, finding time to become engaged to J. Parks Jones, formerly of Cincinnati, who courted her for a few years. On August 25, the couple married in the Plaza Church and saw their son born a year later. The young couple separated in 1912, perhaps not temperamentally suited to each other, particularly if Gonzalez desired to continue performing. Newspapers note a contentious hearing for divorce, with Jones claiming she demonstrated temperamental behavior while Gonzalez noted that Jones had emotionally and physically abused her while also seeing other women. The judge dismissed the hearing, suggesting they go home and work out the situation, but awarding her $40 a month from Jones.

At this time, Gonzalez decided to enter filmmaking, looking for a way to support herself and her child. Confidently approaching Vitagraph Studios’ western Manager Director Rollin S. Sturgeon, she impressed him enough to hire her, stepping quickly into the role of their juvenile western leading lady. In 1914, Gonzalez appeared with actor William Desmond Taylor in “Captain Alvarez,” one of their five pictures and one of her many location films. She performed with William Duncan and Jack Mower in several of her Vitagraph films.

Promoting herself in the trades, Gonzalez accentuated her position in Los Angeles society and embroidered her resume, claiming she worked with David Belasco’s troupe in Los Angeles and performed with stock companies, and that motion picture exhibitors suggested she enter the field. She also claimed that she “took advantage of securing an athletic training, learning to swim, ride and play gymnasium games,” an ironic statement, since she told newspapers in 1907 that she possessed no athletic talent or gene and never participated in any physical activity besides dancing. She was truthful however in her love of cars and fashion, driving sporty models and acting as mechanic while also designing parts of her wardrobe.

Gonzalez received fine notices, with Moving Picture World stating she gave an exceptional performance in the title role of “Anne of the Mines” while others praised her physical skills in a variety of action films. A Japanese film magazine called her “the Virgin White Lily of the Screen” and “typifying the vigorous out-of-door type of heroine.” She gained some of her strongest praise for one of her last Vitagraph films, “Chalice of Courage” in 1915.

Though acting in moving pictures, Gonzalez continued singing and dancing in recitals and for church benefits, as well as assisting others to stage concerts as well. In 1916 she produced and directed a vaudeville show benefiting a church.

In the fall of 1915, she moved to Universal, where she made a variety of movies, many with director Lynn Reynolds for his nature films like “The Girl of Lost Lake,” “The Secret of the Swamp,” and “The End of the Rainbow.” The city girl learned to perform her own stunts on diverse and sometimes dangerous locations like Mt. Wilson, Big Bear, Santa Cruz, Catalina, Truckee, and even the redwood forests. While in Truckee, they performed with three feet of snow on the ground. Perhaps weather conditions or hazardous stunts led to health issues. In 1916, she was reported ill before a trade noted that she arose from her sick bed after the production was shut down for two weeks to complete the last scenes. In June 1917, trades reported Gonzalez had resigned from Universal, perhaps for further recuperation. She did organize a Red Cross fundraiser and performed for charities later that year.

During her time working at Universal, Gonzalez met assistant director Allen Watt. Over time their relationship blossomed, and on December 8, 1917, the couple married in an impromptu ceremony at her parents’ south Los Angeles home. Perhaps Gonzalez was experiencing health issues as few newspapers report activities for her in 1918. On October 23 of that year, she died after suffering for four days from influenza. Just 27, she left her husband, seven-year-old son, parents, and siblings.

The Catholic newspaper The Tidings called her Myrtle Gonzalez Jones at her death, failing to acknowledge Watt. Some newspapers claimed Gonzalez’s death came from other causes, be it falling from a horse in 1915 to suffering a heart attack. After a few months of grieving, Watt rejoined Universal as an assistant director to Douglas Gerrard.

Dying so young, Gonzalez was quickly forgotten by the entertainment industry and press. Over time, many if not most of her films disintegrated, leaving little to display of her legacy. While little exists of Gonzalez’s career, she was the first major Latina film performer to succeed in movies, and for that she should be celebrated.