One of Los Angeles’ most glorious examples of architecture merging glamour and commerce, downtown’s Eastern-Columbia building turned 90 years old September 12. Designed by Claud Beelman and erected in 1930, it symbolizes the City of Angels’ ascendance to the pinnacle of style, pizzazz, and success during the delirious 1920s. A stunning Technicolor Art Deco masterpiece, the Eastern Columbia Department Store exemplified the aspirational nature of both the companies that constructed it and the booming city in which it stood. The Los Angeles’ flagship location combining the operations of two outfitting companies, the Eastern Outfitting Company and the Columbia Outfitting Company, it demonstrated the growing success of the two concerns.

Though two separate organizations, both companies were founded and operated by the same gentlemen, Polish immigrants Henry and Adolph Sieroty and Henry Shemanski. Eastern Outfitting Company sold furniture and housewares while the Columbia Outfitting Company sold clothing; both selling well made, aﬀordable products to those aspiring to greater things. To ease purchasing, the Eastern Outfitting Co. established credit installment pay plans in the 1880s, allowing the middle class access to better merchandise by paying fixed prices over a set period of time.

The Eastern Columbia Building during construction, courtesy of the Los Angeles Public Library.

The Sierotys arrived in California in 1882 after immigrating as young men from Poland, quickly growing their fortunes and success. By 1885, they co-founded the Eastern and Columbia organizations in San Francisco, with the chains operating independently. The companies featured outlets up and down the Pacific Coast. Adolph Sieroty, Vice President and General Manager of the chain, arrived in Los Angeles in 1899 to establish Southern California branches of both around Sixth, Spring, and Main in the heart of the city. Success came quickly for the brothers, with the two outfits growing and adding

locations around Southern California and Los Angeles, always of high quality and architecture. In 1921, Columbia Outfitting Co. purchased 851 S. Broadway and gradually began acquiring the buildings surroundingsurroundng it as well. By January 8, 1922, the Los Angeles Times declared that the Eastern Outfitting Co. and the Columbia Outfitting Co. intended to construct a height limit Class A tower at the Northwest corner of Ninth and Broadway to house the two concerns, to be designed by the renowned firm Meyer and Holler. For unknown reasons, the company held oﬀ construction for eight years.

On April 21, 1929, the Los Angeles Times announced that Claud Beelman had released a statement announcing he would design a Class A tower of steel, reinforced concrete, and terra cotta at 849 S. Broadway, with J. V. McNeil Co. serving as contractors. “Modern type of architecture, as used in the latest New York City structures, has been followed in the design.” The structure would feature three high speed elevators and two freight elevators, with a lobby comprised of imported marble. Eastern would occupy the lower floors while Columbia would be housed in the upper, with other space leased to outside concerns. 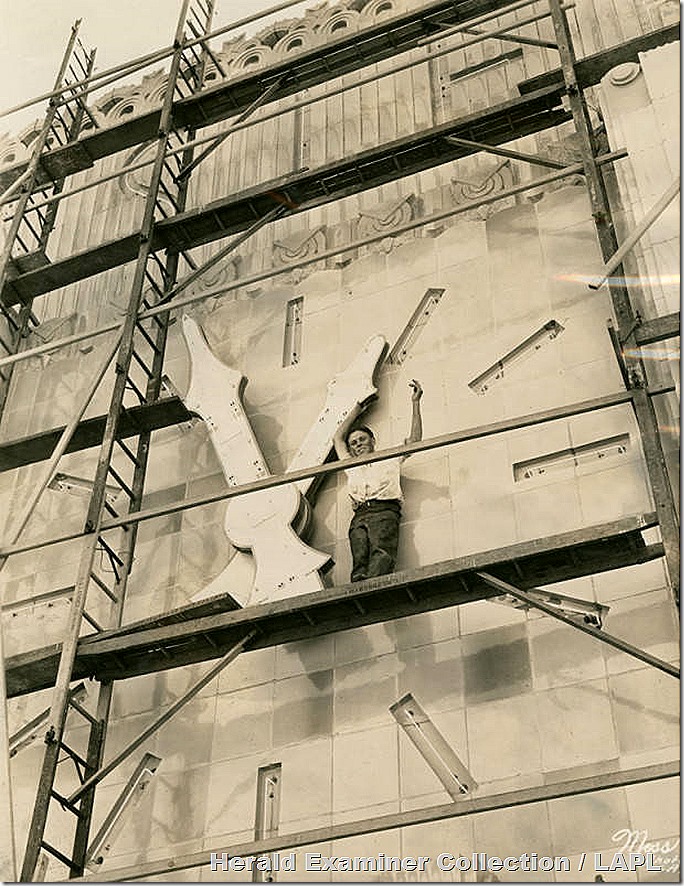 That June, Beelman visited New York to inspect department stores “to incorporate advanced designs.” Wowed by Art Deco architecture there and in the nearby Richfield Building, the architect conceived an exuberant Art Deco structure for the site, something connoting glamour as well as success. Struck by other colorful buildings arising around the city, such as the Richfield, Bullock’s Wilshire, and the like, Beelman announced that he would add color to the building as well, drawing all eyes to its streamlined facade.

Though the stock market crashed in late October 1929, Eastern and Columbia moved ahead to building their deco palace. Construction began one minute after midnight, January 1, 1930, with McClintic Marshall Co. providing steel and Gladding McBean to create more than 1000 tons of glamorous terra cotta turquoise and gold terra cotta to outfit the building as stylishly as the merchandise sold. Businesses raced to sign leases in what promised to be one of Los Angeles’ most gorgeous buildings, with more than 90% leased by March.

Speeding through construction with a clean safety record, the $1.25 million building appeared ready for its close up in July 1930, with papers announcing on June 1 that the “modernistic” structure would be ready for occupancy in one month. A tad oﬀ, the department store prepared for opening in September. Papers trumpeted the new grand opening of September 12, noting the 13 story Streamline Moderne tower clad in cerulean blue terra cotta and gold leaf accents represented the best Southern California could oﬀer.

Given special permission, the newly christened Eastern Columbia building at Ninth and Broadway exceeded the city’s 150 foot height limit by more than 114 feet with a sleek neon lit, four-faced clock tower, the largest time piece in the city, outfitted with a Telechron timepiece by the General Electric Supply Company. Unusual for its time, the clock tower featured the boiler room and mechanical equipment. 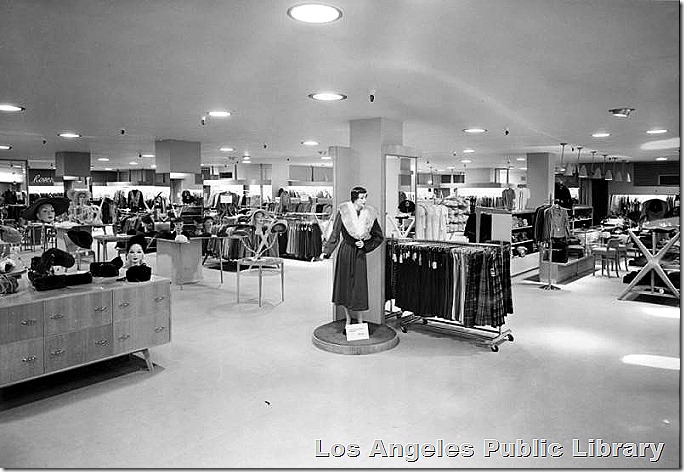 From its inception, Los Angeles’ residents saluted its beauty and style, eventually calling it the “Queen of Los Angeles’ Art Deco architecture, and one of the most beautiful Deco buildings in the country. The organization crowed about their landmark location’s beauty and convenience in full page ads in September 12 newspaper editions trumpeting that day’s housewarming party.

Eastern and Columbia operated separately in the space, with the floors containing the following departments:

The organization kept up with the times as well, undergoing renovations and remodelings over the next several decades. In 1939, the building experienced remodeling and expansion costing $130,000, with fluorescent lighting added to enhance interiors. Trying to improve on service, the company announced quicker credit, service, and delivery in 1940, along with free parking next door and across the street. They also began operating under one name, the Eastern-Columbia Department Store.

Growing sales led to the purchase of a neighboring building on Hill Street, with the new addition opening in 1950. While they kept up-to-date and stylish in every way, times were changing, with stores opening in neighborhoods where shoppers lived and businesses and oﬃces moving away from the downtown area, leading to a slow deterioration.

On February 2, 1957, Eastern-Columbia announced a shocking going out of business, immediately beginning to liquidate stock. They would begin leasing out their space to other companies, turning more into a credit institution themselves. As they began remodeling, oﬃcials announced that most of the building would be converted into oﬃce space, with display areas for apparel companies. This $1 million remodeling would include adding air conditioning, adding marble walls to the lobby, terrazzo floors and sidewalks filled with chevrons and zigzags, and four high-speed elevators.

For the next few decades, the building continued as oﬃce space, earning recognition as a Los Angeles’ Historic Cultural Monument in 1985 before being converted into lofts/condos in 2005.

One of Los Angeles’ most striking and original structures, Eastern-Columbia still remains of the city’s, if not the nation’s, most fabulous Art Deco buildings.