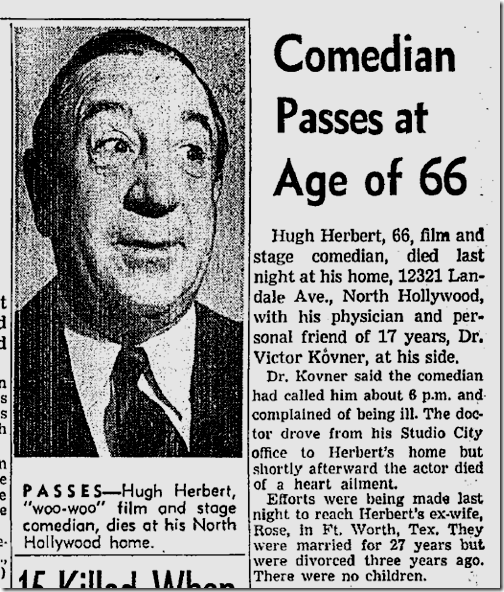 Per an ad in the July 27, 1937, Daily Variety, “Public Screwball No. 1 to the film audiences of the world is a rubber-faced flibber-jibbett who began his career in talking pictures 30 years ago, wrote the first all-talking picture nine years ago, won fame as Broadway’s only Scotch-Irish Jewish comedian, and is named Hugh Herbert.”

Born 1888 in Binghamton, N.Y., Herbert worked as a newsboy, messenger and tailor’s boy to help make ends meet for his family, before becoming usher and assistant prop master at Proctor’s 125th St. Theatre in Harlem.  He made his stage debut as a boy in the melodrama “Blue Jeans,” working in a saw mill.  He told the Los Angeles Times in a Sept. 18, 1938, story that “…I had to take bows as I picked up boards.  That taste of applause made me an actor.  You never get over applause, never get over it.  Gets in your blood, your ears, or something.”

He made his film debut in 1907 behind the screen of a New York City nickelodeon, mouthing the words supposedly coming from the hero’s mouth.  He soon moved on to stock companies, writing and performing sketches, including appearing the “Schnitz Is Wrong,” playing a drunk with a German accent, according to the May 29, 1914, issue of Daily Variety.  He created the sketch “The Sons of Solomon” in 1911, in which he played a Jewish clothes dealer from the Lower East Side of New York, before touring the country with the act in 1913 and 1915, later adapting it into “The Sons of Abraham.”  Herbert first appeared in Los Angeles with “The Sons of Solomon” in 1915.

For over 20 years, he toured the country performing comedic roles in vaudeville, writing sketches and reviews, and directed.  He performed on both the Orpheum and Keith circuits.  Herbert returned to Los Angeles in 1927, writing and appearing in the short play “Exposures” at Hollywood’s Music Box Theatre, before turning to film.

He wrote “Lights of New York,” the first all-talker, and also wrote dialogue for “The Great Gabbo.”

RKO signed Herbert in 1930, allowing him to write, act and direct.  He wrote dialogue for “Sheep’s Clothing” and “Louise,” as well as acted in them.  Herbert also wrote dialogue and directed some scenes in “Danger Lights,” starring Louis Wolheim.  When Raymond Hatton became too ill to play a comic drunk, Herbert stepped in and almost stole the show with his performance.

While making the film “Diplomaniacs” with Wheeler and Woolsey, Herbert acquired his goofy style after a late night party the night before.  Forty feet up in a tree surrounded by Indians, Herbert wavered uncertainly and cried “Woo Woo,” which Indians yelled back at him.

After a few years, he moved to Warner Bros., playing small but interesting character parts in films and also played small parts in radio.  While at the studio, he built a home in Malibu, supposedly with the first pool built for a celebrity, to complement his West Hollywood home.  During his time with Warner’s, Herbert became a sensation, receiving excellent reviews for his comic portrayals

Herbert moved into a nine-room early American home constructed for him at 12321 Moorpark in Studio City in 1936, a 10-acre site which he intended to use as a farm and raise chickens, turkeys, pigs, horses, cows and other animals.  Because of this, he was named Studio City’s first honorary mayor on Sept. 26, 1936, and Herbert also had himself named chief of police and fire chief.   He would write articles for the “Studio City News” as well as edit and write articles for the Warners Studio News in 1937.

A few months later, when Studio City Chamber of Commerce sponsored a contest to name a boulevard strip, Herbert suggested Prosperity Road, along with other entries like Streamline Mile, Destiny Drive, Wonder Way, Busy Bee Lobby, and Hitler Strasse.  It appears that Ventura Place might have won out.  Herbert and the Chamber voted to place a nine-foot statue of a Red Cross Nurse with the neon sign “Save a Life” at Ventura Boulevard  and Ventura Place, which contained an emergency Red Cross kit and telephone to use in aiding injured pedestrians and motorists.

Herbert might have needed the emergency help, because a driver for Consolidated Film Industries struck his car on Cahuenga Boulevard on Dec. 20, 1938, for which he was hospitalized a couple of weeks, and later was awarded $10,000 in damages.