The ad campaign for “The Sniper” was graphic.

After “The Temptress” last week, I wanted something a bit newer, so I played with a subject search at the American Film Institute catalog and decided on “The Sniper.” It’s a taut, disturbing movie in which Edward Miller (Arthur Franz) crisscrosses San Francisco, dropping off dry cleaning and unsuccessfully struggling to control his violent impulses against women. The film looked like it was going for a stock ending – but the script by Harry Brown, from a story by Edna and Edward Anhalt, finds a new resolution.

Motion Picture Herald ( Oct. 6, 1951) reported that “ ‘The Sniper’ was originally announced as the story of a sex maniac but altered considerably since then.”

Photoplay reported that Arthur Franz “gave such an outstanding performance as the psychologically disturbed killer in Stanley Kramer’s ‘The Sniper’ that he is today one of the most talked about actors in Hollywood” and he was cast in Kramer’s ‘Eight Iron Men.’ ”

“Arthur — shy and gentle — was a little worried over his success as a killer. ‘Do I look like a killer?’ he’d keep asking his wife. ‘I think I look normal.’ ”

No fault can be found with this Stanley Kramer production from the viewpoint of suspense and atmosphere, but the story of a pathological killer who cannot control a desire to shoot down unsuspecting people is too gruesome to be considered as entertainment. The average picture-goer will find it much too morbid, for one is left with a feeling of horror each time the killer, using a carbine with a telescopic lens, gets his victims into the sights and presses the trigger.

Harrison’s Reports (April 19, 1952) followed the review with a call to Hollywood to stop making depressing movies, like “The Sniper” and “Without Warning.”

Here’s a big league suspense thriller. A laundry messenger, young, handsome, but insane, terrorizes a city. He has a carbine with a telescopic lens and an irresistible penchant for shooting beautiful girls.

…. There’s no overwhelming production values here, no top-flight marque names — just crisp, exciting entertainment. yes, it’s on the grim side, sinister, chilling, gripping; but a splendid change of pace from the comedies and musicals.

A solemn rebuke to society for not doing enough to confine and correct the incipient sex criminal is dutifully put into words in the Stanley Kramer’s new picture, “The Sniper,” which came to the Criterion yesterday. But the preachment is primly academic and it seems but a dignified excuse for working a slightly different angle into a simple manhunt on the screen.

….The presentation of the killer that Arthur Franz gives, under the direction of Edward Dmytryk, lacks the dark hints of mental disease. Mr. Franz seems a very nice fellow, and whenever he gets the urge to kill he appears to be no more afflicted than if he had a stomachache.

For Monday, we have a mystery gent. The frame grab is a little fuzzy because he was moving. His companion has been cropped out due to insufficient mysteriousness. He will appear Friday.

And here he is again. As before, his companion has been cropped out due to insufficient mysteriousness.

For Tuesday, we have a couple of juvenile mystery guests. Our mystery girl, and I know this will be hard to believe, does not approve of such goings-on.

Update: This is Marlene Lyden. 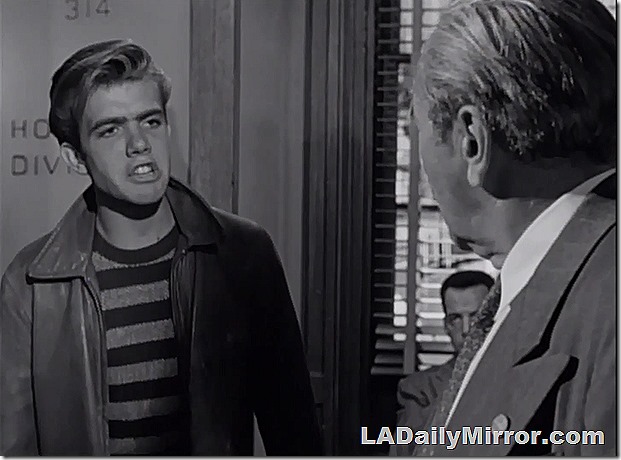 We also have this troubled teen. He also does not approve of such goings-on. His companions have been cropped out due to insufficient mysteriousness and will appear Friday.

Update: Showing full frame — This is Danny Mummert with Adolphe Menjou as Back of the Head Guy.

Our mystery movie has a huge cast with lots of mystery women. So for “Hm Wednesday,” let meet a few of them.

This is mystery woman No. 1.

Update: This is Robin Raymond.

This is mystery woman No. 2. And, as astounding as it might seem, she does not approve of such goings-on.

Update: This is Mabel Paige in her fourth appearance as a mystery guest. With a bonus photo of her with her mystery cat.

This is mystery woman No. 3.

Update: This mystery woman stumped a lot of people, especially me. I went for the week thinking she was Marlo Dwyer but she is apparently Geraldine Carr. Apologies to Sylvia and Sue, who identified her correctly. Nailing down identities on some of these minor players with few credits is really a challenge. 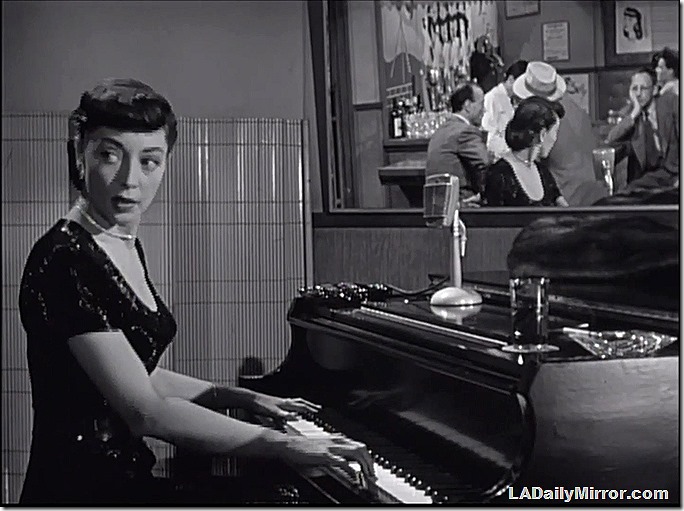 And finally, mystery woman No. 4.

Update: This is Marie Windsor.

For “Aha Thursday,” here are some of the men in our mystery movie with varying degrees of mysteriousness. Mystery man No. 1 on the left is playing an amiable drunk. That’s right, he’s sloshed. Our mystery pianist doesn’t approve of such goings-on. Mystery man No. 2 in the middle is going to take care of things.

Update: This is sloshed Charles Lane, Jay Novello and Marie Windsor, with Paul Dubov at the bar. 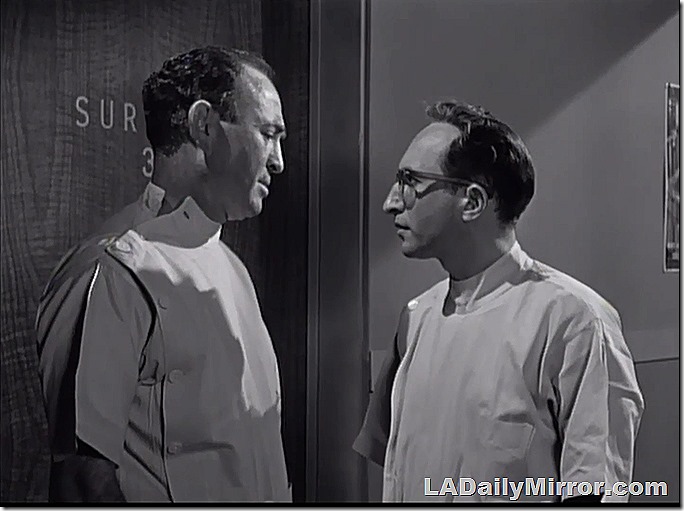 Mystery men Nos. 3 and No. 4 are in the medical profession.

Update: The man on the right is Sidney Miller. The man on the left plays a character named Chadwick, identified on IMDB as “Max Palmer,” an actor who was 8-feet-2. Mary Mallory had him as Steve Pendleton, which seems a strong possibility.

He mostly keeps his back to the camera, except for this blurry shot.

And this blurry shot.

Update: This is Richard Kiley.

Update: This is Harry Cheshire. 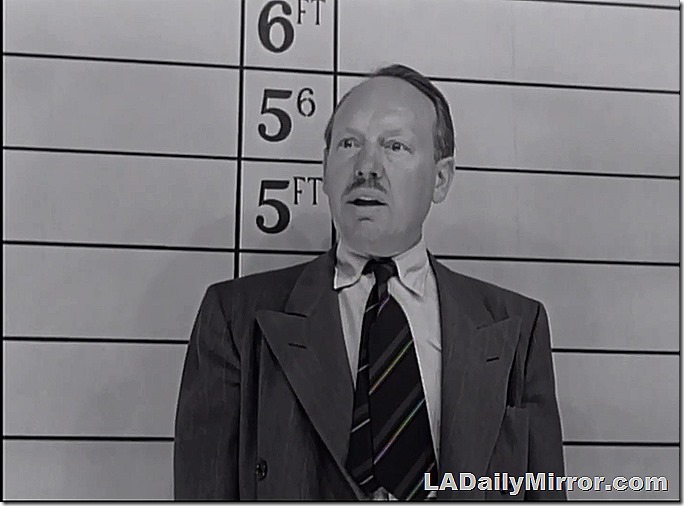 Update: This is Byron Foulger.

And mystery man No. 8. That’s a lot of mystery men.

Update: This is Frank Faylen.

For Friday, we have our mystery anti-hero. I’ll skip You Know Who because we just had him, even though his shaved off his mustache for this part.

Update: This is Arthur Franz.

And this is Adolphe Menjou, just seen in “Forbidden,” without his trademark mustache.