“The Last Man on Earth” is available on DVD from TCM.

I wanted to do an pandemic/end of the world movie, but which one? After a bit of research I settled on “The Last Man on Earth,” which posed unexpected challenges because almost every frame of the film is scanned an online. I haven’t read the book, but I’ll have to put it on my reading list after the curious (to me, anyway) ending of the film. Aha! A scan of the book shows a somewhat different ending. 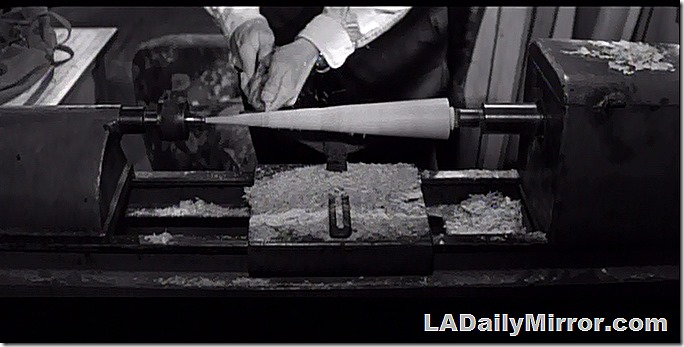 Even this seemingly obscure image of Vincent Price’s woodworking double making a vampire stake is online. Most annoying.

This week’s mystery movie is going to be extremely challenging – for me, because nearly every frame of the film is available via Google image search. But not this one. Half a second earlier and you would have seen our leading man in the shot. But not today, friends. Not today.

Update: This is the HQ of vampire killer Mooorrrrgannnn (Vincent Price). Notice the strands of garlic and the mirror (vampires can’t stand their reflections, don’t you know?)

For Tuesday, we have this plot point. There are much better images in our mystery movie, but Google image search is being particularly annoying about this film.

Update: This is the map Mooorrggannnn uses to check off where he’s looked for vampires.

For “Hm Wednesday,” we have some mystery children from the “before times.”

Update: In a flashback, Moorrrgannnnn recalls his daughter’s birthday party. This is Christi Courtland.

Also in the “before times,” these mystery scientists are busy working in the mystery lab.

Scientists in “the lab” disagree about the origins of the plague. Update: This is Giacomo Rossi Stuart, left, and Umberto Raho.

For “Aha Thursday,” I managed to find another image that is not in Google’s image search. This is in the “before times” of the film.

Update: I really had to search for images of Emma Danieli that weren’t already online. Here she is with Christi Courtland.

For Friday, we have this mystery newspaper clipping.

Except for this mystery woman. Although that’s a decision he may regret.

Update: This is Franca Bettoia.

And here’s a better shot of our mysterious leading man.