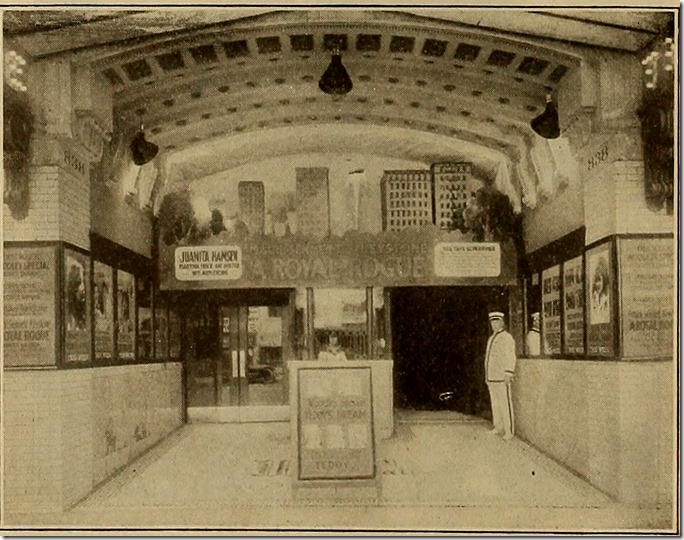 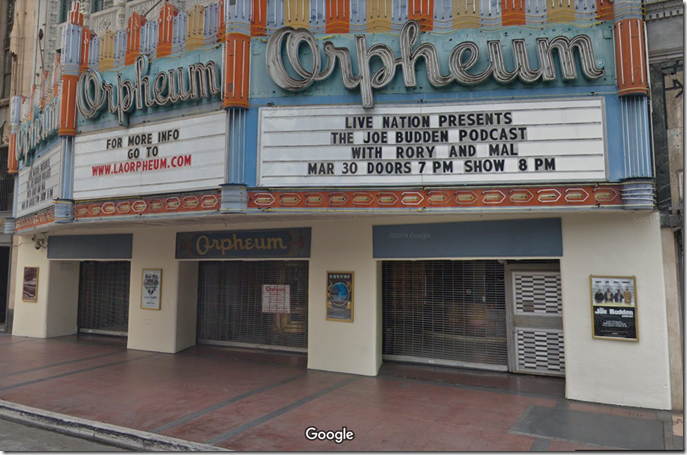 The Orpheum on South Broadway was built in the location once occupied by the Woodley Theatre.

A consummate showman, Woodley bought what the September 25 issue of the Los Angeles Times called a “super organ,” “equipped with full orchestra, brass, strings, drums, and grand piano,” for his flashy organist C. Percival Garratt. Per the paper, Woodley first purchased the organ before designing a theater to hold it, and then bought the property on which to build. Woodley’s swanky theater featured all-leather seats with two-seat divans in the loges and solar ventilation that helped heat and light the structure.

Woodley operated as a quality, first-run house, booking high-end products from major companies from Lois Weber films to Biograph. In September 1914, the Los Angeles Investment Co. took over ownership, with Woodley continuing to serve as operator and this time featuring William A. Brady pictures.

The theater appears to have pioneered the practice of organizing a film festival to honor a star with their late April 1915 Mary Pickford Revue, showing reprints of “fine old Biograph subjects” selected by Pickford herself and directed by the master D.W. Griffith. The May 1 Moving Picture News reported that almost 12,000 tickets were sold to see “The New York Hat,” “Wilful Peggy,” “All on Account of the Milk,” “Iola’s Promise,” and “Lena and the Geese,” with 10 one-sheets on display at the entrance.

A few months later, King of Comedy Sennett searched for box office ballyhoo to goose ticket sales for his product, and joined forces with Woodley. The two formed the Woodley Theatre Co., purchasing the theater from Los Angeles Investment Co. as reported by the June 26, 1915, Moving Picture News. Woodley would serve as manager, continuing to showcase prestigious titles. 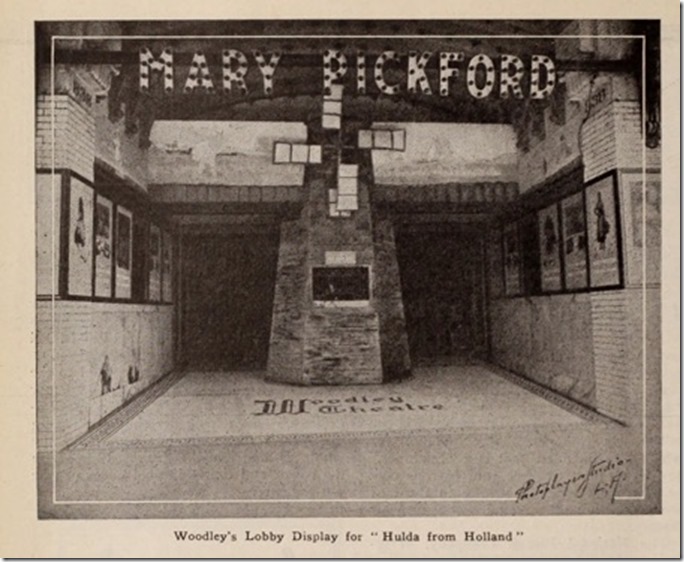 The ticket booth was turned into a windmill for “Hulda From Holland.”

The theater continued booking pictures by America’s top producers and directors, from Griffith to Thomas Ince. America’s Sweetheart earned the theater’s biggest box office receipts when her film “Hulda From Holland” screened that summer, assisted by the eye-catching display of turning the box office stand into a giant windmill.

Woodley continued devising great publicity gimmicks, such as the creation of a gigantic papier-mache locomotive above the theater entrance for the “Teddy and the Throttle” release. While Sennett films opened double features, dramas starring such stars as Pauline Frederick and Mae Murray followed.

Looking for a bigger bang for his buck, Sennett announced a contest to rename the theater on October 19, 1917, with a $50 grand prize. Within a few weeks the theater unsurprisingly began operating as the Sennett Theatre with ushers in natty blue uniforms.

The entrance to the Woodley Theatre, made into the cab of a locomotive to promote Sennett’s “Teddy at the Throttle.”

The gimmick played well for a few months before running dry. Harry P. Caulfield, formerly manager of Universal City and the Garrick Theatre, took over theater operations in March 1918, changing the name to the Riviera Theatre but remaining a “high-class family theater” per the February 26, 1918, Los Angeles Herald. Business flattened.

Looking to increase attendance, Sennett authorized a major overhaul of the theater in September 1920, hiring the Frank Meline Co. to redesign the structure, adding new restrooms, orchestra pit, marquee, ticket booth, and dressing rooms and renaming it the Victory Theatre. The Victory continued to feature Sennett films and even preview his comedy features like “Down on the Farm.” By 1923 the theater was rechristened the Mission Theatre.

New owners bought the property in 1926, tearing down the Mission and constructing the regal Orpheum Theatre, which stands today.

For a short time, Mack Sennett gained power, publicity, and prestige owning and operating his own motion picture theater, helping set the stage for later production companies acquiring theaters to create large business conglomerates or for companies like Netflix looking for a glamour showcase to premiere their works.