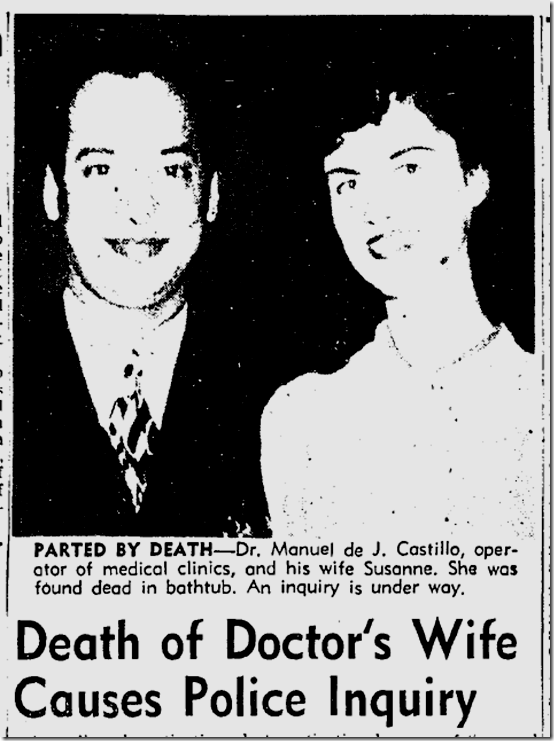 A doctor and a mysterious death—of course, Dr. Manuel de J. Castillo came under suspicion, although I suspect it was only briefly—in the Black Dahlia case.

The Times never followed up on Susanne Castillo’s death, either on the autopsy or the inquest. But Dr. Castillo turned up in the news several times in the 1950s and ’60s.

A 1940 graduate of the National Autonomous University of Honduras, Castillo got his California medical license in 1944. In 1955, he bought a 1,500-acre ranch near Bishop.

Two years later, he was named in a bizarre paternity suit against Vernon Simpson, a car salesman accused of fathering a baby girl. Simpson countercharged that Castillo and Edith Mitchell, the manager of Castillo’s clinic at 1750 W. Santa Barbara (the 1947 story had the wrong address), conspired to name him as the father to force him to leave California or “to suppress certain knowledge” he had of their activities.

Simpson charged that Castillo and Mitchell used artificial insemination to entrap him into marriage, saying that while he had been intimate with Mitchell, the relationship ended 11 months before the child was born.

Mitchell denied any conspiracy, saying she met Simpson while shopping for a car and accepted his offer of marriage although he was not yet divorced from a previous wife. Simpson finally admitted being the girl’s father and agreed to $75 a month child support.

Castillo next appeared in The Times in 1961, when he sued the estate of Charles Lee Powell, whom you may recall built the Broadway Tunnel. Castillo said he treated Powell hundreds of times, but only on a few occasions in his office. Castillo said he once examined Powell in an unlighted fuse room under a stairway.
Although he sought $87,450 for treating Powell 563 times, Castillo was awarded $5,000 after the defense said that he had only treated Powell once, 36 hours before his death.

If I get a chance, I’ll stop by the Los Angeles Public Library microfilm room and see what appeared in the Examiner, Herald-Express and Daily News about the death of his wife. It’s an odd one.