Fred Thomson in an undated image.

In the early days of the Hollywood film industry, moguls and movie stars lived simply, residing in comfortable but elegant homes. As the business evolved from small companies into large-scale moviemaking factories in the 1920s, residences followed the same path. Romantic, grandiose mansions fit for filmmaking royalty soon became the norm, designed by such top-notch Los Angeles architects as Gordon Kaufmann, Roland Coate, and Wallace Neff.

In 1926, Neff designed the Hollywood “house” to top them all: Frances Marion and Fred Thomson’s The Enchanted Hill in Beverly Hills, sitting at the apex of one of the city’s highest hills. The ultimate model for romantic Spanish Colonial Revival architecture, The Enchanted Hill reigned as moviedom’s ultimate showplace, a fairy-tale residence come to life.

Mary Mallory’s “Living With Grace” is now on sale.
She will give a presentation at Larry Edmunds Bookshop on Sunday, July 22, at 2 p.m.

Frances Marion reigned as Hollywood’s top screenwriter, male or female, for most of the 1920s. Born in San Francisco as Marion Benson Owens, the young woman began her working life modeling and serving as a commercial artist before entering the motion picture field. Marion joined the filmmaking industry in 1915, writing and acting in films, soon finding legendary director/producer Lois Weber as a mentor, with whom she worked in virtually every area of production.

Over the next 30 years, Marion worked with the major power brokers of the film industry: Mary Pickford, Irving Thalberg, and William Randolph Hearst, winning two Academy Awards for screenwriting in the process. She gained fame as Hollywood’s top screenwriter in the 1920s and directed three films during the same period. While visiting Camp Kearney in San Diego with her friend Mary Pickford near the end of World War I,the twice-married Marion met the injured Fred Thomson, a world-class athlete and minister. The couple felt an immediate spiritual and physical attraction, marrying in 1919. 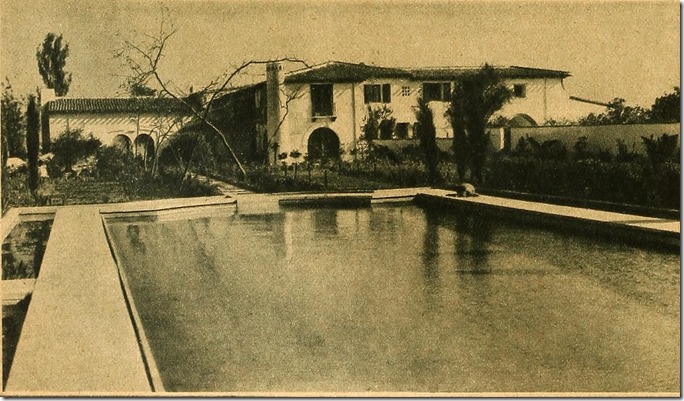 The exterior of The Enchanted Hill, with the swimming pool.

Thomson, the son of a minister born in Pasadena, excelled in sports at Occidental College and Princeton Theological Seminary before becoming a minister. After losing his first wife, Gail, in 1916 to tuberculosis, he enlisted in the military. After coming to Hollywood, Thomson quickly became an actor and one of the industry’s top cowboy action stars, providing heroics in serials and oaters with his talented horse Silver King.

For several years, Thomson and Marion lived comfortably in a house in Los Angeles’ Hancock Park. By 1925, the couple looked for a large piece of property on which to construct a home to raise a family and to acknowledge their place in the Hollywood firmament. They first examined Bel-Air for just the right piece of property, but were informed by real estate developer Alphonzo Bell, creator of Bel-Air, that his tract forbid Jews or actors living there.

Moving on to Beverly Hills, Marion and Thomson discovered a secluded but gorgeous piece of property above Benedict Canyon, the perfect place to keep and ride a stable of horses. Thomson originally bought a small piece of property at $400 an acre, then $1,500 an acre, and finally buying 20 additional acres a few years later at $4,500 an acre for a mansion they later called the Enchanted Hill, the same nickname as William Randolph Hearst’s extravagant Central California estate. Eventually the couple owned 120 acres atop their magical hill. Sam Watters in volume 2 of his “House of Los Angeles” book claims that the two native Californians, “…steeped in its romantic traditions, planned to copy one of those old adobes,” to construct their own elaborate Spanish Colonial Revival Andalusian abode. 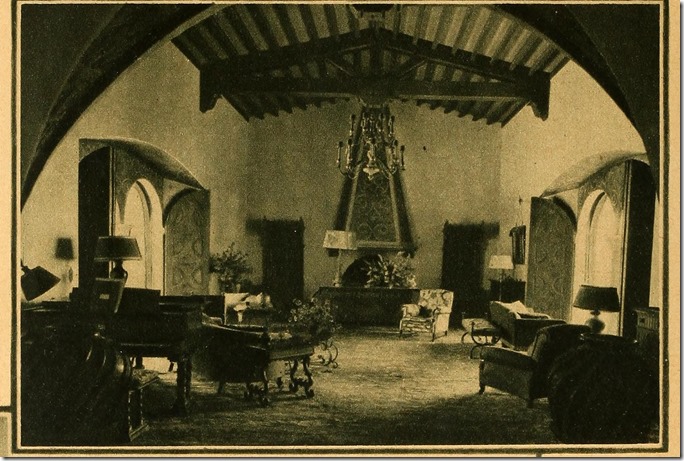 The interior had a beamed ceiling and Spanish colonial touches.

After falling out with their original architect, the young couple signed Pasadena architect Wallace Neff to design their masterpiece, but one with its tongue firmly planted in cheek. Neff, born in La Mirada, Calif., to an aristocratic family, studied in Massachusetts before getting his start as a draftsman and quickly moving up the ranks as one of Southern California’s top architects. By 1923, he helped invent what became known as California Revival, a romantic salute to the Golden State’s Mexican and Spanish past. Neff designed luxurious Spanish estates costing an average of $15,000 to $30,000 and for such celebrity clients as Mary Pickford and Douglas Fairbanks, director Fred Niblo, director King Vidor, producer Darryl F. Zanuck, and later actors Fredric March, Joan Bennett, and Charlie Chaplin and Paulette Goddard.

While Thomson and Marion desired a large estate, they also yearned for something playful and full of whimsical touches. As the book “Wallace Neff: The Romance of Regional Architecture” describes it, they devised an “impressive yet whimsical” coat of arms…”modeled in low relief over the entrance in the spirit of the place; it consists of a roll of film rampant over a horse’s head and is emblazoned with a horseshoe for the good luck needed in Hollywood.”

Full of Neff’s signature touches such as a courtyard driveway entrance, balconies, patios, buttresses, and arches, the Enchanted Hill at 1441 Angelo Drive featured a lighthearted touch with Oriental finials atop columns on the main portion of the mansion, as regal as any potentate’s. 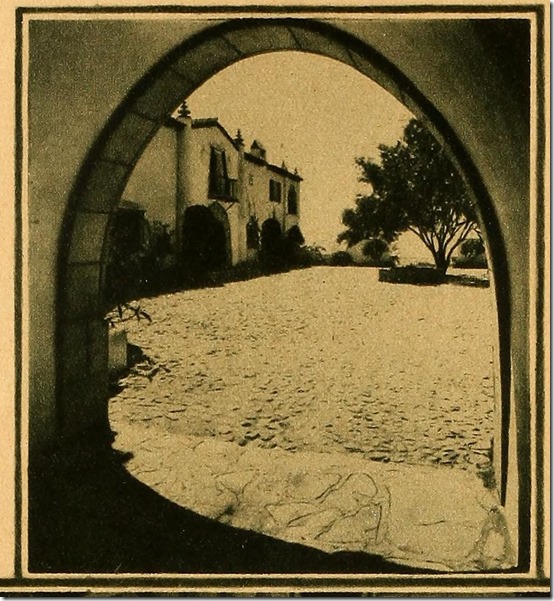 An archway frames the exterior of the home.

Forty workers toiled to construct the 10,000 square-foot home and its outer buildings atop the massive hill. Terraced levels led upwards from the entrance along the gigantic driveway. Marion herself joked that the hill “resembled a giant wedding cake,” rising on multiple levels to the ultimate prize. The hillside property included tennis courts, 100-foot swimming pool, two riding rings, stables for 12 horses, dairy, chicken houses, an aviary, two guest houses, and a ranch hands house before one even approached the gigantic main house with five-acre yard. Horticulturalist Paul Joseph Howard landscaped the hillside. One guest house possessed 13 rooms, while the mansion itself featured 21. Silver King and his fellow four-footed friends lived in style as well, with the stable featuring mahogany floors.

The Enchanted Hill’s interior dazzled as well, thanks to the work of the George Cheesewright Studios. The home featured Gladding McBean tiling, a two-story entry, a drawing room two and a half stories tall, an Aeolian pipe organ, screening room, ballroom, work room for Thomson, and office for Marion. Thomson’s personal shower featured a dozen spigots, with one 10 feet high. 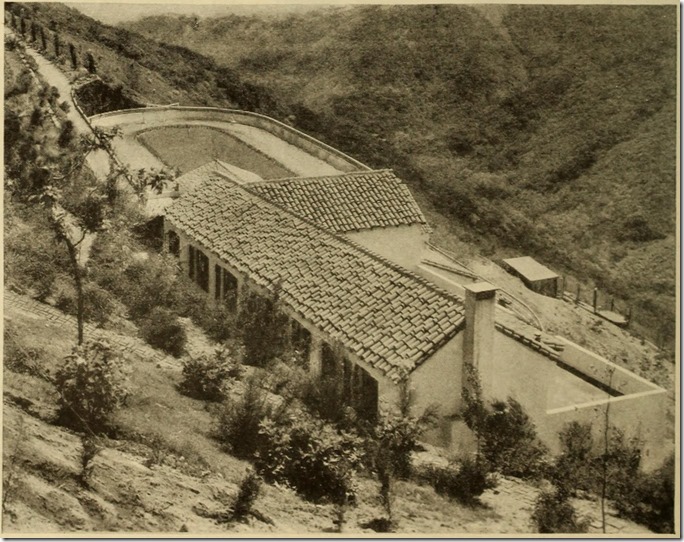 The stables at The Enchanted Hill.

Thomson enjoyed spending time riding his horses with friends over the many hillside paths and also tinkering on engines in his special work room. Marion churned out thoughtful and articulate screenplays in her little office. In 1926, their son, Frederick Jr. was born, followed by the adoption of baby Richard in 1927. The couple entertained the Hollywood glitterati in warm get-togethers at their home, such as teas, rides, or dinners, as well as hosting intellectuals, scientists, and artists for salons.

In 1928, the two appeared to have it all, with Marion one of filmdom’s top screenwriters and Thomson one of the country’s most popular cowboy stars. They happily raised their family and dreamed of a long life together. That idea was cut short at the end of the year. Working in his stable, Thomson stepped on a rusty nail, contracting tetanus, initially misdiagnosed as kidney stones, before dying Christmas Day 1928.

Frances Marion called the home “the house that bunk built” after her husband’s death.

Gravely despondent over her husband’s death, Marion decided to abandon the home, calling it “the house that bunk built,” one too large for her and the children. By the end of January, she listed it and 15 acres for sale at $750,000. Oilman Legene S. Barnes of the Elbe Oil Land Development company purchased the luxurious manse April 28, 1929, paying $540,000 cash for both it and the grounds.

He owned it until 1945, selling to inventor and industrialist Paul Kollsman, who restored much of the property. After Kollsman’s death, his wife owned it for several years before selling it to Microsoft founder Paul Allen in 1997 for $20 million.

Three years after purchasing it and additional acres, the eccentric billionaire demolished the main house and all its elegant outer buildings, letting the hillside remain barren for more than 17 years. On July 11, journalists reported that Allen had put 120 acres up for sale, including the site of the former Enchanted Hill. What was originally a thoughtful, elegant vision now stands to possibly become a small tract of super-sized, hodgepodge mega-mansions.